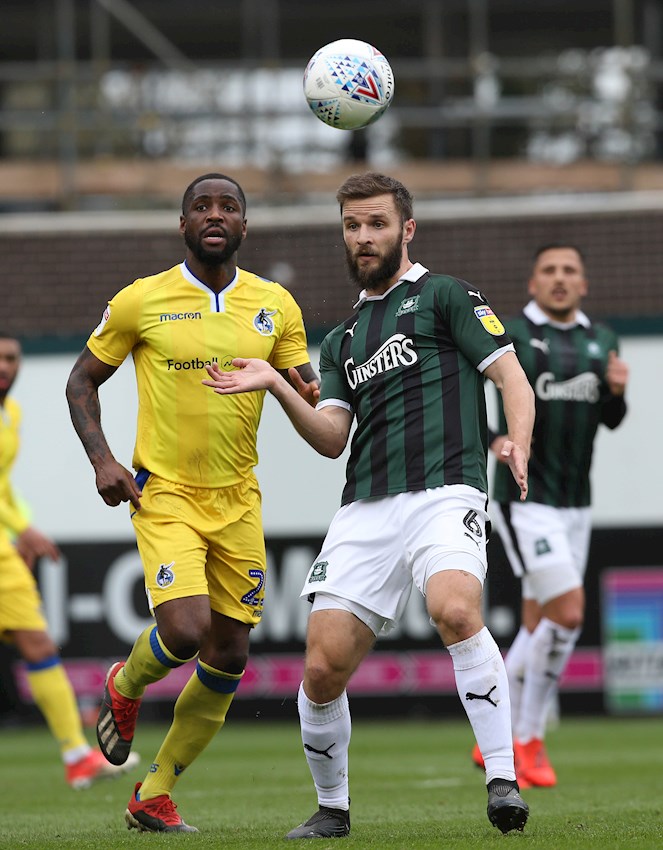 DESPITE the manner of Argyle’s 2-2 draw with Westcountry rivals Bristol Rovers on Saturday, midfielder Jamie Ness was delighted to be back in the thick of it at Home Park.

The Scottish midfielder made his first Sky Bet League One start since November, as an injury to Graham Carey sustained in training on Friday opened the door for Ness to make his first-team return.

“I think, looking at the big picture, for me personally, it was good be out there and play 90 minutes after such a long period of time,” said Ness.

Despite the opportunity, Ness was under no illusion that replacing Carey, one of Argyle’s most creative assets, was going to be a big task.

“Graham’s been brilliant for us, with his goals and his assists, we knew we’d all have to step up with him out of the team,” he continued. “I felt first-half we did that, we played well, created a lot of chances.

“Second-half, obviously being in front, we sat back a little bit more, probably too much towards the end, but I think overall we deserved to win with the performance. It’s a bit gutting to lose the late goal.”

Despite being employed primarily in a deeper role during his Argyle career, Ness enjoyed the freedom of playing more offensively. It’s certainly something he’s capable of, and, indeed, against Saturday’s opposition, having bagged two goals in a starring role in the Greens’ 3-2 home win over Rovers last season.

“I had a couple of shots today [Saturday],” said Ness. “I would like to weigh in with some goals, especially with Graham being out of the team, we all had to step up. I thought Ruben [Lameiras] was excellent, creating things, and he deserved his goal. We know that we have to get goals all over the pitch.”

Ness admits he was only certain that he’d be given the starting nod by Derek Adams at lunchtime on the day of the game, but months of hard work behind the scenes ensured that he was able to stay the course and complete the full 90 minutes.

“Obviously Graham [Carey] had picked up a little injury, but I didn’t know if I would come back into the team, or not,” said Ness. “I’d prepared just as if I was going to play, I’ve done that for the last while anyway, but it’s nice to get the opportunity and I’m delighted to be back out there in front of the fans.

“I’ve done a lot of work when I was injured, a lot of extra work. It was me and Conor Grant, actually, doing a lot of extra stuff in the gym, the swimming pool, lots of extra things just to make sure we were in the best condition possible for when we came back in. I definitely felt the benefit of that and hopefully that will stand me in good stead for the end of the season.”

Earning the right to start a game is probably tougher now than at any other point in the season, with many players returning from injury and others in excellent form. Ness knew, then, that he had to perform when his chance arrived, or he might be waiting a little while for another one.

“When you’re not in the team and the lads are playing well and winning, you’re obviously happy, but you’d like to be playing,” he said. “There’s not much you can do when the lads have been performing so well.

“I had an opportunity and I tried to take that with both hands, and it’s important that we have a competitive squad. When you look at the bench we’ve got, it’s a very strong bench, so the lads are going to be pushing each other all the way to make sure we’re as competitive as possible.”