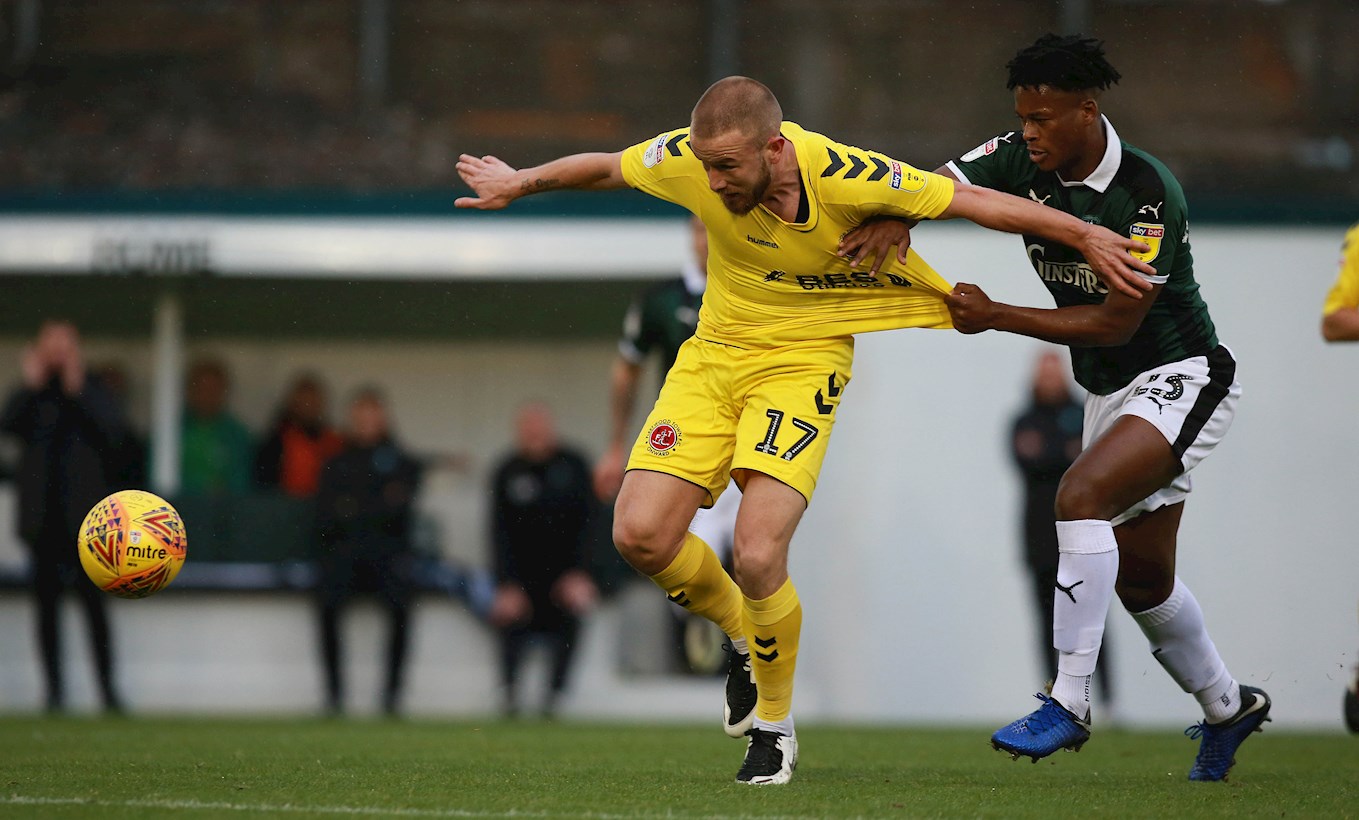 ARGYLE might have climbed to their season’s-best Sky Bet League One rank of 12th after Tuesday’s win over Shrewsbury, but manager Derek Adams is very keen to reel in a few more sides above them, including Saturday’s opponents, Fleetwood.

The Greens will arrive on the Fylde coast four points behind Joey Barton’s side, and are in confident mood, given that they beat their hosts earlier in the season and have only improved since.

The Pilgrims might be in good form, but Derek doesn’t expect an easy game at Highbury on Saturday afternoon, as he is fully aware of the attacking quality of their forward trio, as well as the experience in midfield.

“We played well against them down here, but they are a very good footballing side, a number of exciting players. They’ve got a good way about their system, they play 4-3-3, and they have been able to string a number of good wins together.

“They’ve got [Paddy] Madden, [Ched] Evans, [Ashley] Hunter, [Ross] Wallace and [Jason] Holt in the middle of the park. They’ve got some experienced players in their team.”

The game also marks the return to Fleetwood of midfielder Antoni Sarcevic, who scored the only goal for Town in their 1-0 League Two play-off final win over Burton in 2014. Sarce, who celebrated his 27th birthday on Wednesday, bucked Derek Adams’ recent trend of sticking with a successful eleven, replacing the well-performing Oscar Threlkeld at the earliest possible opportunity following his two-match suspension.

“It was a tough game to come into, but he [Sarcevic] played that role in the number 10 position very well, and we drop him back, at times, to play in a three in midfield, as well,” said Derek.

“We have changed it, we have moved things about, but not too much. We obviously assess the games that are coming up, but we’ve got a consistency just now that is helping us.”

One player who has been unfortunate to miss out since his January loan move from Luton Town is Lloyd Jones. The gaffer has sympathy for the defender’s current frustration at missing out on game-time, but feels that Ryan Edwards and Niall Canavan’s current form means they should continue to hold down their place.

“It is difficult, because you always want to play,” said Derek. “The reason he came here is to try and get some game-time, but Niall Canavan and Ryan Edwards have done very well. I do feel sorry for Lloyd, because he’s a great boy. He’s got a good future ahead of him, he’s only 23 years of age, but he’s got good passing abilities, he’s quick and he’s strong.

“I spoke to him a number of weeks ago, and he knows the situation. I was very open with him when he first came into the football club. He is one, the same as Oscar Threlkeld and Paul Anderson, that knows when they are to come into the team they have to fight for their position.”

Competition for places among a buzzing Argyle squad has rarely been higher this campaign, and Derek will have a full squad to select from, barring the injured trio of Kyle Letheren, Joel Grant and Conor Grant. In midfield and forward areas, particularly, players’ form is causing Derek a bit of a selection headache.

“We’ve got a lot of exciting players in the team,” he said. “If you look at the front three, they’re up there with the best in the division. We’ve got midfielders and defenders who are sticking to their task, wanting to get clean sheets, and looking a solid unit.”

“In the midfield, Antoni can run about, create openings for other people and win the ball back. We’ve got David Fox who will take the ball anywhere on the pitch, Yann Songo’o will win headers and go for any 50/50. We took on Jamie Ness the other night and one of the tackles he made in midfield was outstanding. These are the type of players you need in your team to benefit a Ladapo, a Lameiras and a Carey.”