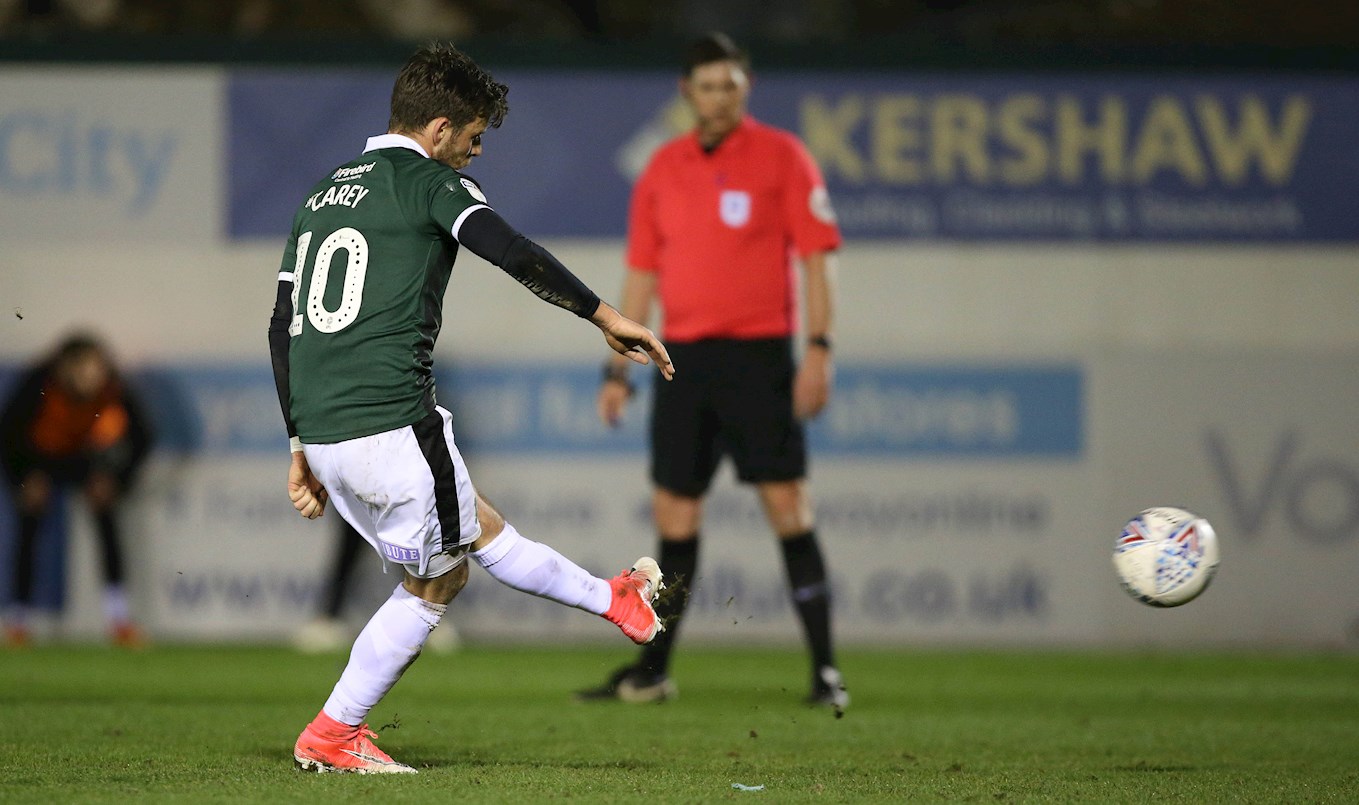 ARGYLE manager Derek Adams felt that the referee got both penalty decisions right in the Pilgrims’ nail-biting 2-1 victory over Shrewsbury on Tuesday night, and was proud of Graham Carey’s response after committing the foul for the visitors’ spot-kick.

“I think that both were penalty kicks,” said Derek. “When you come into contact with a player inside the box, it gives you a problem. They were both penalties.”

The Greens dominated the opening half of football and a mixture of bad luck and poor finishing left them unfortunate to only be one up at the break, thanks to a goal from Freddie Ladapo.

On 60 minutes, Shrewsbury drew level through former-Pilgrim Ollie Norburn, after the midfielder was brought down by Carey in the box. The resultant penalty was tame, and well-saved by Matt Macey, but the rebound fell fortuitously for Norburn, who gratefully tucked the rebound home.

“He [Matt Macey] stood up well to the penalty kick, saved it with his feet, but he just wasn’t quite able to kick it far enough out,” said Derek. “Credit to one of their players for following-up and getting the rebound.”

The final 30 minutes of the game were a different proposition for Argyle, in increasingly difficult weather conditions, and it looked as though they may have to settle for a disappointing point, before Ruben Lameiras, who had been busy all night, was clumsily clattered by Shrews midfielder Anthony Grant with only a minute of the original 90 left to play.

Carey, who perhaps felt he owed his team-mates after conceding the earlier spot-kick, stepped up in an atmospheric cauldron of tension and frayed nerves, to rip the penalty into the top-left corner. It may only be three points, but, at this stage of the season, with the league table as congested as it is, that penalty represented a real sliding doors moment.

“Graham obviously gave away the penalty, and he took it very well,” said Derek. “There was a lot of pressure on him, but he was composed and he dispatched it very well. It was all about getting the three points and we were able to do that.”

Argyle’s win on Tuesday night extends their unbeaten home run in Sky Bet League One to seven games. In that time, the Greens have hauled themselves from rock bottom on Boxing Day, to the giddy heights of twelfth after the taming of the Shrews.

“I think that home form is vital,” added Derek. “We’ve shown that we can go away from home and get points. There’s a lot of pressure on us at home because of the expectancy of the supporters, and there was another big crowd here [on Tuesday] to cheer us on.

“It’s extremely tight, and we’ve had a difficult period of games, we’ve still got nine games to go, and we’ve obviously got a number of wins that we require to put us in a good position.”