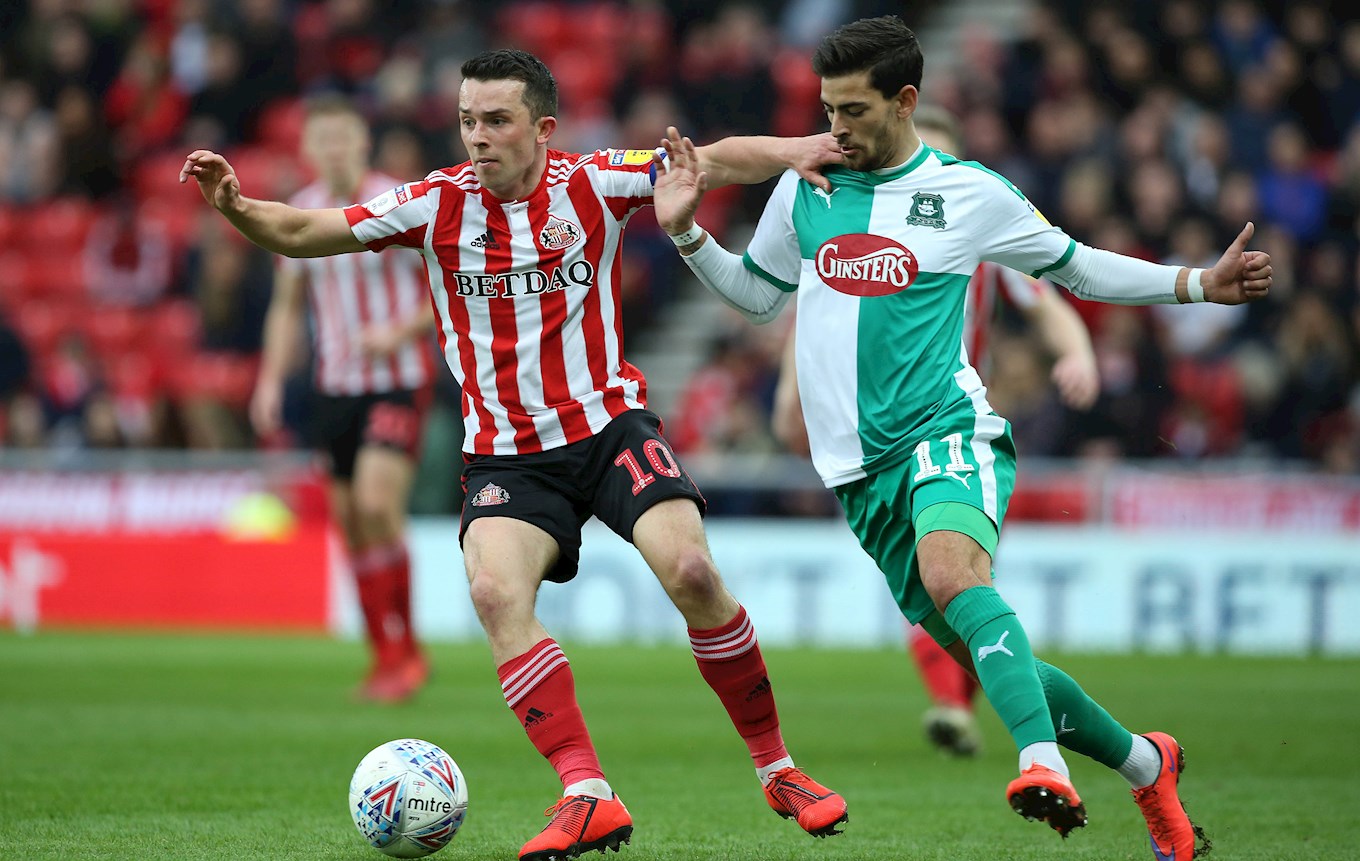 ARGYLE suffered only their second defeat of 2019 in a game of variety of shades at the Stadium of Light.

After a fairly non-descript opening from both sides, the Pilgrims faded and went behind when Lee Cattermole profited from some sketchy defending.

The Pilgrims were an entirely different prospect in the second half, and the result of the match might have been so different had a robust appeal for a penalty against Sunderland been upheld.

Argyle’s post-interval efforts were finally snuffed out when the Black Cats clawed their way to a second goal deep into the match through captain George Honeyman.

The in-form Pilgrims had made one enforced change to their starting line-up for their third ever visit to the Stadium of Light, necessitated by Antoni Sarcevic’s two-match suspension.

Oscar Threlkeld, an impactful and scoring substitute in the previous week’s 5-1 thrashing of Rochdale at Home Park, was given the task of filling the considerable boots of Sarcevic, who missed Argyle’s biggest fixture of the season – heartbreakingly, for someone who has been so influential in the Pilgrims’ recent resurgence –and was reduced to Carlsberg South West Peninsula League duty at Saltash.

With Threlkeld promoted from the substitutes’ bench, there was a recall to colours – on his 28th birthday – to Jamie Ness. The Scot’s first action since suffering a calf injury in December had come in a Premier League Under-23 Cup game five days earlier, when he played only the first 45 minutes. Happy returns, indeed.

Sunderland, looking to take their unbeaten league run at the Stadium of Light to 19 consecutive matches, made one change from the side that won 2-0 at Bristol Rovers the week previously, with Lewis Morgan coming in for Duncan Watmore.

Threlkeld took his place in a three-man midfield, alongside Yann Songo’o with the pair of them a little bit advanced of David Fox. Freddie Ladapo, a fitness doubt before the game, led the line, with Graham Carey and Ruben Lameiras in support of both him and what soon became evident was a disciplined defensive line.

Lameiras created the game’s first real chance, playing the role of the two in a sweet one-two with Ladapo, whose raking shot from just outside the area had the beating of goalkeeper Jon McLaughlin but skidded just the wrong side of the custodian’s right-hand post.

It was a rare opportunity for either side during a close-quarters first quarter in which neither goalkeeper was obliged to make anything resembling a save, a source of satisfaction to the Pilgrims and frustration to the home side and their supporters.

The Black Cats sprung into life just before the half-hour point, with Kyle Letheren preventing a header by centre-back Jimmy Dunne doing what Matt Done had done for Rochdale, and scoring.

Almost immediately, Letheren was called into action again, diving to his right to keep out a shot from Aiden McGeady, looking to add to the two goals he scored in the earlier fixture between the two sides this season at Home Park.

The sighters gave Sunderland an appetite and obliged the Pilgrims to defend more vigorously.

Their rearguard action was brought to an end when they spurned an opportunity to clear their lines, with Carey apparently caught in two minds. Morgan seized on the brief moment of hesitation to purloin the ball and tee it up for Cattermole to crash it home.

The goal momentarily brought Argyle out of their shell but, for whatever reason, the Green Machine spluttered, rather than purred, and failed to move smoothly through the gears on the Stadium of Light’s lush surface.

The half ended with Sunderland looking for a second to take into the break, and McGeady was denied only by some astute goalkeeping from Letheren, who came off his line quickly and made himself big to get the better of a one-on-one.

Even better was to come from Argyle’s last line of defence as he read the intentions of Will Grigg when the Black Cats’ £4m striker was allowed to turn in the six-yard box and fire off a shot which he must have thought was in when the ball left his foot.

Argyle started the second half with real purpose and a slightly tweaked shape which saw Carey in a more central role with Threlkeld, who blazed a headed clearance of Fox’s free-kick over the Sunderland crossbar.

The tactical switch gave the Pilgrims more of the ball and, consequently, more hope.

A week after right-back Ashley Smith-Brown scored a rare goal, his team-mate on the opposite flank, Gary Sawyer, came close to doing likewise after showing no little skill on the ball.

His shot was deflected wide, with the Pilgrims’ insistence that the block had come from a Sunderland hand being shaken off by referee Graham Salisbury, the same official who had harshly punished Ryan Edwards for a not dissimilar infraction at Southend in January.

Smith-Brown then showed how a much-improved Argyle’s half-time changes were taking affect by striding forward and unleashing a long-range drive that McLaughlin was sure about only after it zipped wide of his goal.

Suddenly, the Pilgrims were unquestionably the dominant force. Songo’o stretched McLaughlin with a curler from the edge of penalty area, and Threlekd, the instigator of the attack, slammed the loose ball into the side-netting below an increasingly buoyant Green Army.

Re-enforcing the positivity, Taylor was sent on for Threlkeld, but Sunderland did not permit the Pilgrims to have everything their own way and nearly put the tin lid on the victory when Reece James supplied a delightful cross that Grigg headed wide.

Argyle fielded two more substitutes in the 80th minute, with Letheren giving best to what looked like a groin injury to be replaced by Matt Macey, and Paul Anderson coming on for Lameiras.

Maybe the changes robbed the Pilgrims of momentum but, for whatever reason, they thereafter struggled to regain the impetus which they had held, and Sunderland cashed in late on through skipper Honeyman.