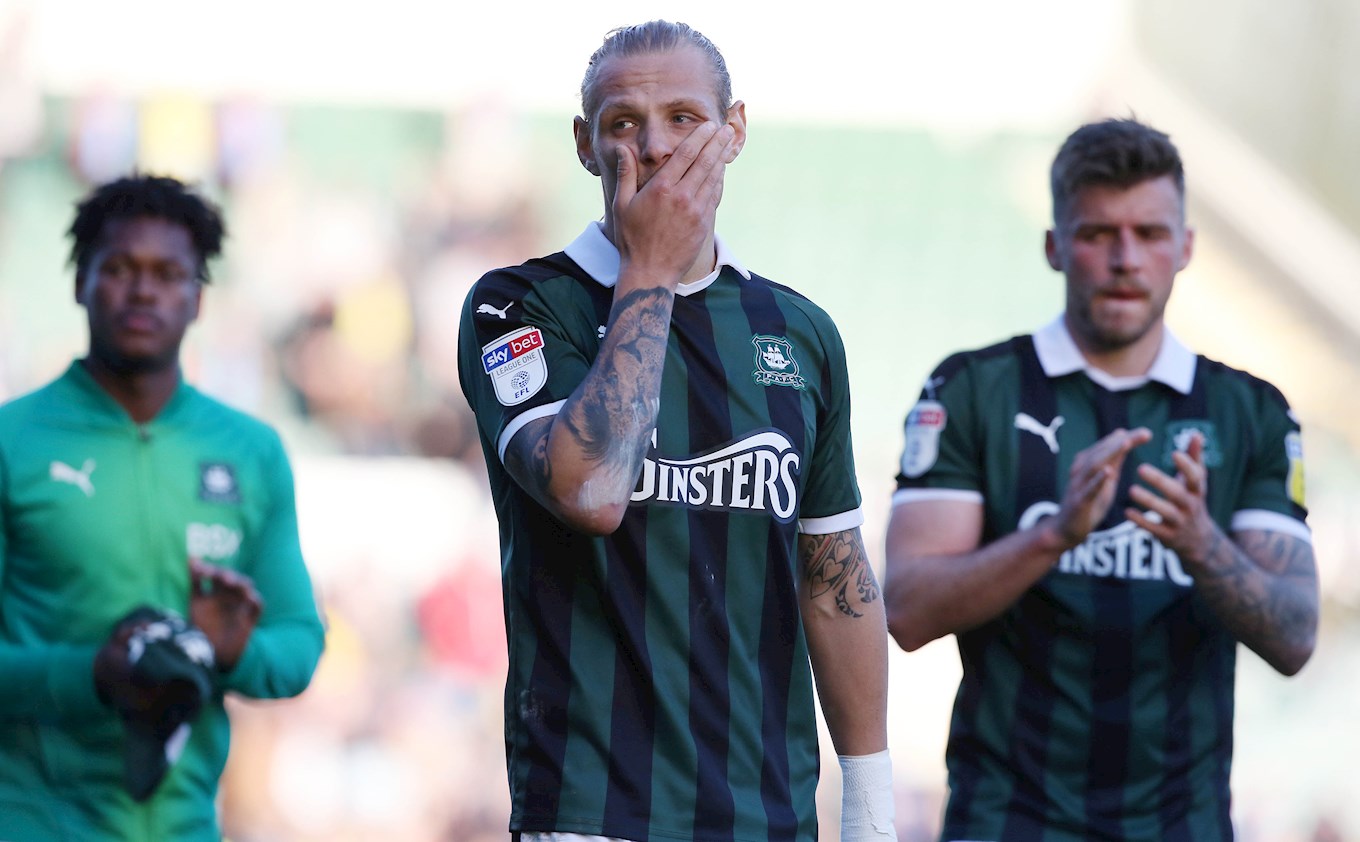 ARGYLE produced a display full of heart and courage as they overcame Scunthorpe United 3-2 at Home Park on Saturday, but results elsewhere meant that it was not enough to avoid relegation to Sky Bet League Two.

The Pilgrims led 2-0 through goals from Lloyd Jones and Freddie Ladapo, before Kyle Wootton and a controversial goal from Josh Morris, who intercepted Matt Macey’s ball out of play due to injury, brought things square. Graham Carey smashed home a goal that, at the time, looked to have secured safety, before a cruel, late winner for Southend over play-off placed Sunderland condemned Argyle to the drop on goal difference.

The Pilgrims entered their date with destiny knowing that, following what chairman Simon Hallett referred to as an “inexorable slide” in the previous few weeks, Sky Bet League One safety was not solely in their hands. A win for the Pilgrims at Home Park would mean that a draw for Sunderland, sitting fourth in the table, away at Southend would keep the Greens in the division.

If the Pilgrims could only muster a draw against Scunthorpe, they would require Sunderland to win at Roots Hall, and Walsall to fail to gather a win away at Shrewsbury. In the event where Southend upset the league table and secured a win – the Pilgrims would have to win, and hope that AFC Wimbledon were defeated on their travels by already-relegated Bradford.

The already intense situation inside a completely sold out Home Park was only enhanced by the plight of the visitors, who would only have a chance of survival if they won at Home Park. Both sides were operating with a caretaker manager, of sorts, although Argyle’s first-team coach Kevin Nancekivell refused to be referred to as such following the departure of Derek Adams.

With only a week, and one game, left, Nancekivell and his interim aide Rhys Wilmot opted against wholesale changes to the side whose capitulation at Accrington one week earlier sealed the fate of their previous gaffer.

There were two changes, which were far from surprising given their influence this season and the carpet-like surface they would be playing on. In came top scorer Freddie Ladapo and freshly-crowned Player of the Season Ruben Lameiras, with Ryan Taylor and Jamie Ness dropping back to the bench. Kyle Letheren’s struggles with a groin issue left him sidelined for the final game of the season, leaving Michael Cooper on the bench, and Matt Macey between the sticks.

It has not been lost on many commenters leading up to today’s game that, this time last year, the two sides were clashing in a play-off decider. The disappointment for both sides that they found themselves in this position was palpable, and Andy Dawson, another potentially taking charge of his final game for the visitors, also made two changes for the final showdown.

If the Greens were to achieve survival on the last day, it would need to be a game of firsts: firsts in heart, firsts to the ball, arguably first to score. As the players emerged from the tunnel, an almighty roar from a sell-out crowd greeted them. One thing was for sure, the Green Army would not go down quietly.

Nancekivell had promised a reaction from his players, and he was not wrong. From the off, Antoni Sarcevic threaded Ladapo through for a stinging drive from 20 yards. Jak Alnwick was equal to the test.

Sarcevic was next to try from range, curling an effort that Alnwick could only tip wide after a great through ball from Graham Carey. From the resultant corner, Argyle took the lead, and nearly blew the roof off Home Park in the process, after Carey’s deflected delivery fell for Ladapo two yards out, who somehow failed to turn the ball in. From the resultant melee, the ball hit the crossbar, and Plymouth-born, Plymouth-bred Jones showed no shortage of heart and desire to throw his head at the ball and bundle it into the net among a minefield of Scunny boots.

The visitors should have been level soon after, though. A speculative effort from range by Matty Lund hit the inside of Matt Macey’s post, and the rebound richocheted off the Arsenal loanee, straight to Wootton, who had the simplest of tap-ins to restore parity. Somehow, he did not.

There had been no shortage of bite from either side, and James Perch became Scunthorpe’s third booking of a fiery opening twenty minutes after protesting aggressively at Roger East, following Argyle’s decision to play on as Novak stayed down following a dive in the box. The farcical routine was complete when, having received treatment for, presumably, a bruised ego, Novak was forced to step off the pitch by East before resuming play, in order to comply with the rules.

For Scunthorpe, remember, only a win would do, and so finding themselves a goal behind, they began to commit more men forward. Experienced wide-man Adam Hammill began to play further up the pitch and found himself a pocket of space to work in on the left-flank before whipping in a dangerous cross that evaded everyone.

Just as it felt the Iron were beginning to get a grip on the game, Argyle netted a devastating second. A cute ball over the top found Sarcevic in behind, after Scunthorpe skipper Rory McArdle misjudged his header. Sarcevic dropped the neatest of headed passes into the path of Ladapo, who sublimely lobbed Alnwick from the edge of the area to provide some much-needed breathing room.

It was a dream start for the Greens, but there remained the matter of the games outside of their control, which, at this point, were still goalless. A goal at Roots Hall in favour of Southend would still leave the Greens in the drop zone. In addition, they had been in a similar position before, and failed to hold onto their lead. Fortunately, though, Scunthorpe continued to be profligate in front of goal, as Lund lashed a golden opportunity to reduce the arrears over the bar with only Macey to beat.

The Pilgrims were dealt a double blow in the matter of moments, one in their control, one outside of it. News that Southend had taken the lead against Sunderland, by virtue of an overhead kick from centre-back John White, filtered through the airwaves in Devon, seemingly in synchronicity with Scunthorpe’s goal. Wootton was offered a reprieve for his earlier miss, turning home from point-blank range after Hammill and Lund kept the ball alive inside the Pilgrims’ area. It could never be that easy, could it?

Half-time arrived, and, as it stood, the Greens would still be relegated on goal difference, having tied on points with Southend and AFC Wimbledon. Without results changing elsewhere, Argyle would need to extend their winning margin by a further three goals to stay up.

The result was by no means secure at Home Park, though, and Perch had a decent opportunity to level things early in the second-half, but connected off-key with his header from a corner, letting the Greens off the hook.

What happened next, though, nobody could expect. Scunthorpe drew level in the most un-sportsmanlike of ways. Macey, having claimed the ball and suffered an injury, signaled as such and rolled the ball towards the touchline. Morris, though, paid no regard to the unwritten conduct of professional sport, and intercepted, lifting the ball over Macey and celebrated as if he had won the World Cup. Macey hobbled off moments later, and Mike Cooper replaced him for his first, and last, league appearance of the season.

The sheer, raw injustice seemed to spur the Pilgrims on, and Lameiras and Carey both burst forward with a renewed vigour, trying to restore the advantage in a game they did not deserve to be drawing. The regained the lead through Graham Carey’s thunderous drive, after Lameiras showed the sort of class absent in Morris's goal – evading two challenges to thread Carey in on the far side. Carey blasted the ball into the back of the net, nearly taking Alnwick with him.

It is funny how football works, is it not? Having been in control in the first-half, and then thrust out of it by virtue of other results and an act of God, Home Park erupted. News of a Sunderland penalty, converted by Chris Maguire, had sent Argyle outside of the relegation zone again. With a little over ten minutes left to play, the Greens had a lifeline.

In an attempt to preserve Argyle’s precious lead, former Iron players Ness and Niall Canavan were brought on to introduce some steel at Argyle, against an opposition who had thrown caution to the wind in search of the two goals they needed to snatch safety away.

It became immaterial again soon after. Southend re-took the lead against Sunderland at Roots Hall with just three minutes to go.

In stoppage time, Lameiras danced through the back-line, like he had all game, all season, to hit the post, before Ladapo did so again moments later. At the other end, Cooper produced a fine save to deny substitute Kevin van Veen the satisfaction of an irrelevant equaliser.

“Down with the Scunthorpe,” was the half-hearted chant of the away fans. I think we can all agree, that if Morris’s antics are the barometer, that is not a good place to be.

However, the league table does not tell lies and we accept our fate with dignity, but also determination to come back even stronger.

Thank you to the Green Army for their magnificent support today, and always.