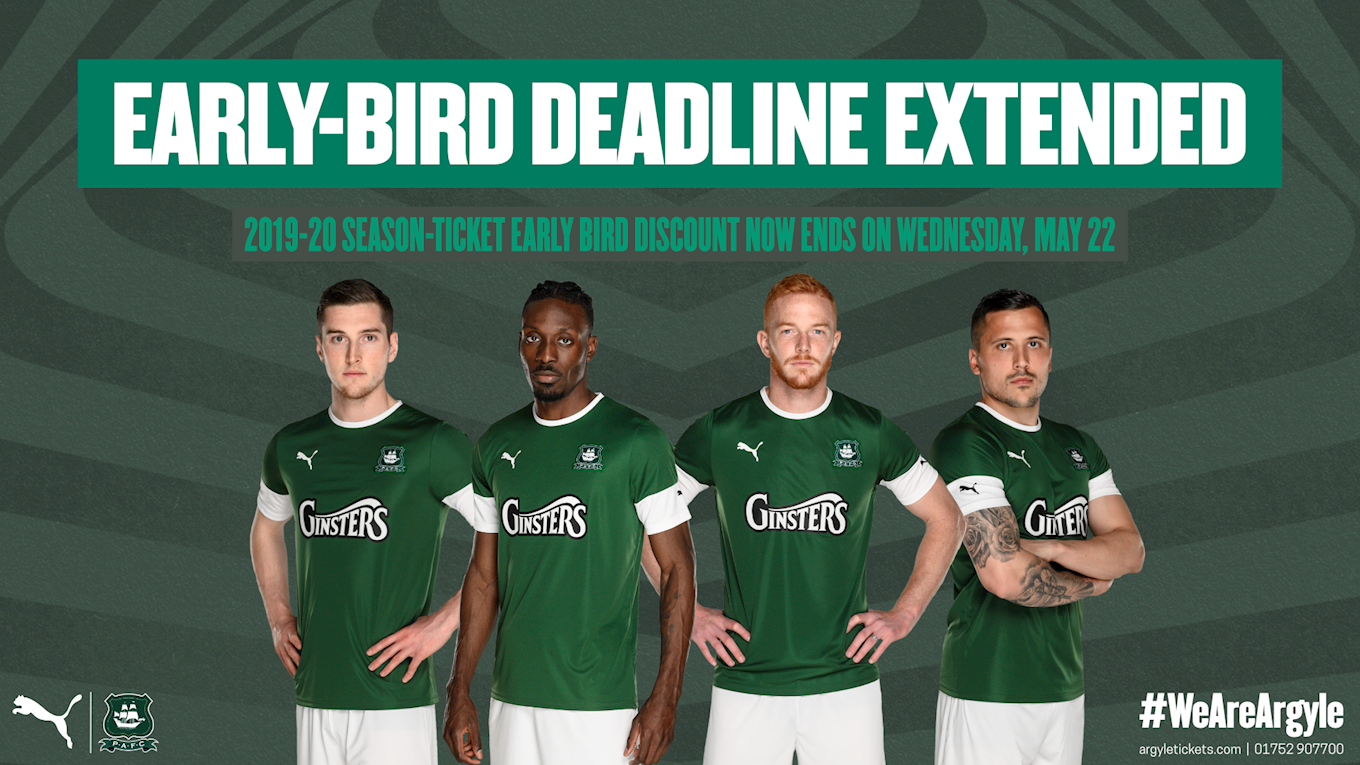 THE Early-Bird window for purchasing season-tickets for Argyle’s 2019-20 campaign has been extended until Wednesday, May 22.

Despite a difficult season on the pitch, the Green Army has again shown their unconditional support for the Pilgrims and the club would like to thank them for their dedication by holding the Early-Bird prices for a little bit longer.

There is much going on at Home Park, with fresh developments taking place on and off the pitch. One of these developments occurred this week, as Andrew Parkinson, formerly Executive Lead for Conferencing and Events, became the club’s new Chief Executive.

Speaking of the Early Bird extension, Andrew said: “The Green Army’s support, especially in recent weeks, has been phenomenal. We hope by extending the Early-Bird window we can go some way to repaying their loyalty.”

The 2019-20 season will herald the start of a new era at Home Park, with the £6.5 million Mayflower Grandstand project due to finish, and be opened to supporters, in the final quarter of 2019. The club hopes that the development will add significant buzz to the match-day and non-match-day atmosphere at the Theatre of Greens, as well as provide long-term additional revenue to support the playing budget.

By purchasing a season-ticket in the Early-Bird window, supporters can expect to make significant savings on regular match-day prices, with a regular adult ticket working out at £17.17 per game. That drops to £13 for over 65s and under 23s, while under 18 tickets are equivalent to £4.17 per game.

“We are working exceptionally hard to lay the foundations for a prosperous and sustainable football club, on and off the pitch,” said Andrew

“That work continues into next season, with an exciting opportunity to hire a new manager to challenge for promotion back into League One and, hopefully, further.”

The club also acknowledges the difficulties caused for members of the Green Army by the switch to a new credit application provider, and we hope that an extension will help ease concerns in this area.

Early signs are extremely positive, with the Home Park Ticket Office noting a spike in season-ticket interest since Saturday, despite the club’s disappointing relegation to Sky Bet League Two.

For more information on the various ticketing packages on offer for next season, click here, or call the Home Park Ticket Office on 01752 907700.