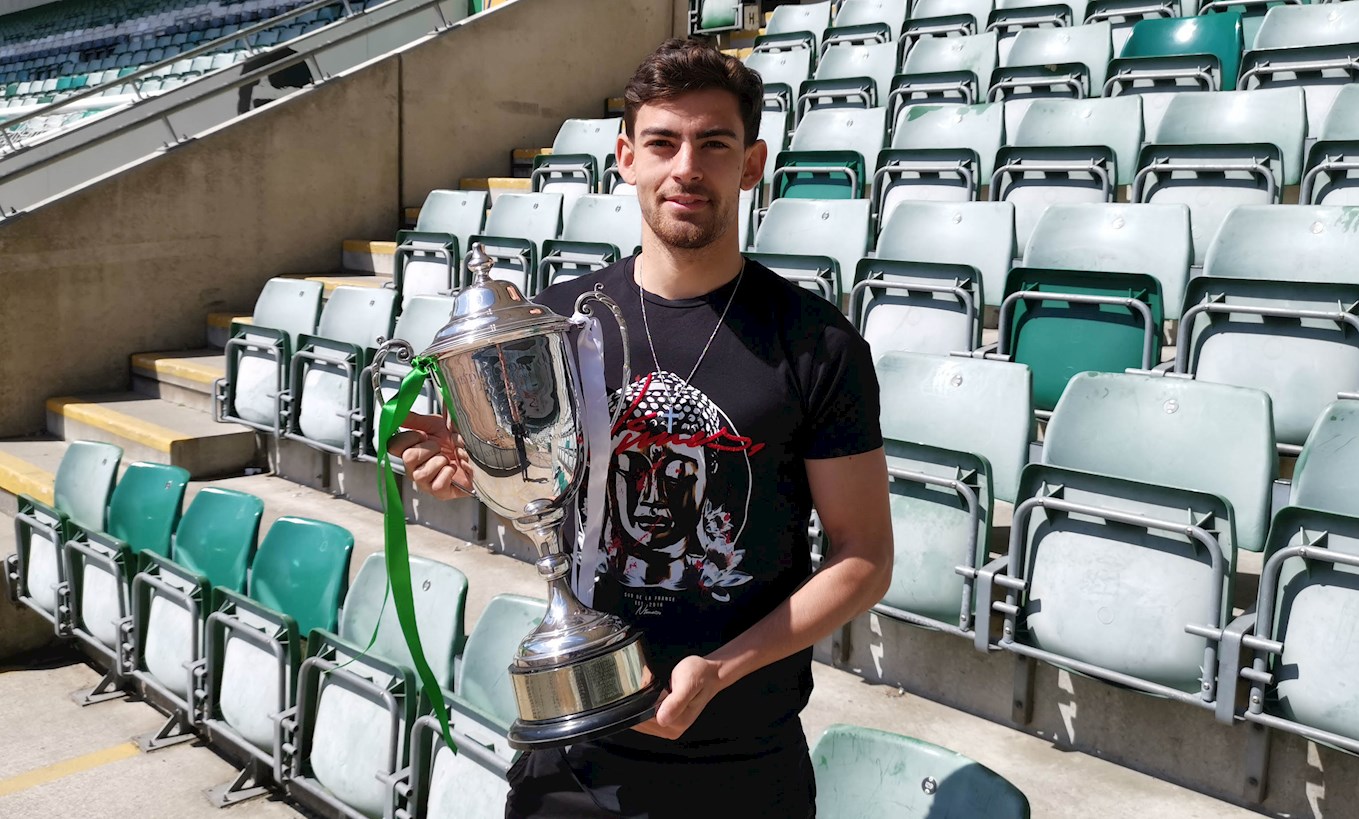 Ruben Sweeps the Board

EIGHTEEN months ago, Portuguese midfielder Ruben Lameiras was on the brink of cutting short his stay at Home Park with barely a first-team appearance to his name, having struggled to force his way into contention following a summer move from Coventry.

On Tuesday, he was front and centre at an end-of-season press call with local media, having swept up every individual accolade available on his way to winning the Pilgrims’ Player of the Season award for 2018-19.

“It was hard, because I felt like, at the time, I should’ve had more of an opportunity,” said Ruben. “I’m the sort of player that doesn’t want to be out of the team, just sitting and waiting for my chance.

“The opportunity wasn’t coming, so I thought I should go and play somewhere. I want to be in the team, doing what I can to help.”

Having attended a trial at fellow Sky Bet League One side Oldham in November of 2017, Lameiras was, in his own words, “near enough out the door”, before a first-team recall at Christmas offered the Spurs academy graduate a chance to prove himself – and prove it he did.

“I came back [after the Oldham trial] and I was meant to go somewhere else the week after,” recalls Ruben, “but the gaffer [Derek Adams] pulled me to the side and said: ‘Listen, you’re going to be playing’.

“As you can imagine, that was a big surprise for me. It was just my moment to say, no matter what happens, I give it my all. I took it as an opportunity to show people what I can do.”

Lameiras starred in a 4-1 home win over the side he was thinking of joining only weeks earlier. The rest, as they say, is history. Lameiras’ influence helped a resurgent Argyle side finish narrowly short of the play-offs in his first season, before going on to win the Pilgrims’ Player of the Season award the following year. Ruben’s trial in Greater Manchester turned out to be a real Sliding Doors moment.

“It wasn’t a case of not loving the club,” said Ruben. “It was more about me, mentally, thinking I need to be playing. At the time, I was basically near enough out the door, but I stuck with it and tried to turn it around.”

In his two-year career, and hopefully counting, at Home Park, Lameiras recalls the second-half of last season as his personal highlight, as a buoyant Pilgrims outfit bounced back from rock bottom to mount the unlikeliest of play-off challenges.

“I think it’s just winning,” he said. “Like many will tell you, there’s no better feeling. When you’re with a group of boys, like the special run we went on last season, the whole team really stood out in the division. We just kept taking teams, game-by-game; that was a highlight in itself.”

Despite Argyle’s struggles on the pitch this season, Lameiras says he is grateful for the way the fans have taken him to heart – which was evidenced by the landslide Player of the Season voting. Ruben polled more than half of the total votes at 51%, with his good friend Yann Songo’o a distant second on 22.3%.

He said: “The fans have been great since I came, but it would be wrong of me to say it’s just all me.

“My team-mates have been really good with me throughout the two years. You’ve got Yann, who was immense this season; Freddie [Ladapo] has scored goals; G [Graham Carey] has chipped in with goals and assists; Sarce [Antoni Sarcevic] runs miles; you’ve got Foxy [David Fox] who plays every single game – it’s a massive credit to him keeping himself fit. It’s the whole team.”

Despite his individual accolades, which includes the League One PFA Fans Player of the Month award for a scintillating January, Ruben says that he would have traded them all to have avoided relegation on the final day.

“It’s not an individual sport,” said Ruben. “I would have given this to someone else if it meant staying in League One. For me, it’s very disappointing to end the season like this. It’s nice to win any award, but at the same time, I would have taken it back and chosen to stay up over it any day of the week.”

The final Saturday’s topsy-turvy encounter with Scunthorpe signaled the last game of Lameiras’s initial two-year contract and he has been offered an extension by the club. He has made no decision as to his future just yet, but has not ruled out representing the Pilgrims next season.

“Whatever happens with me personally, the club will bounce back,” he said. “It’s too good of a set-up not to.”