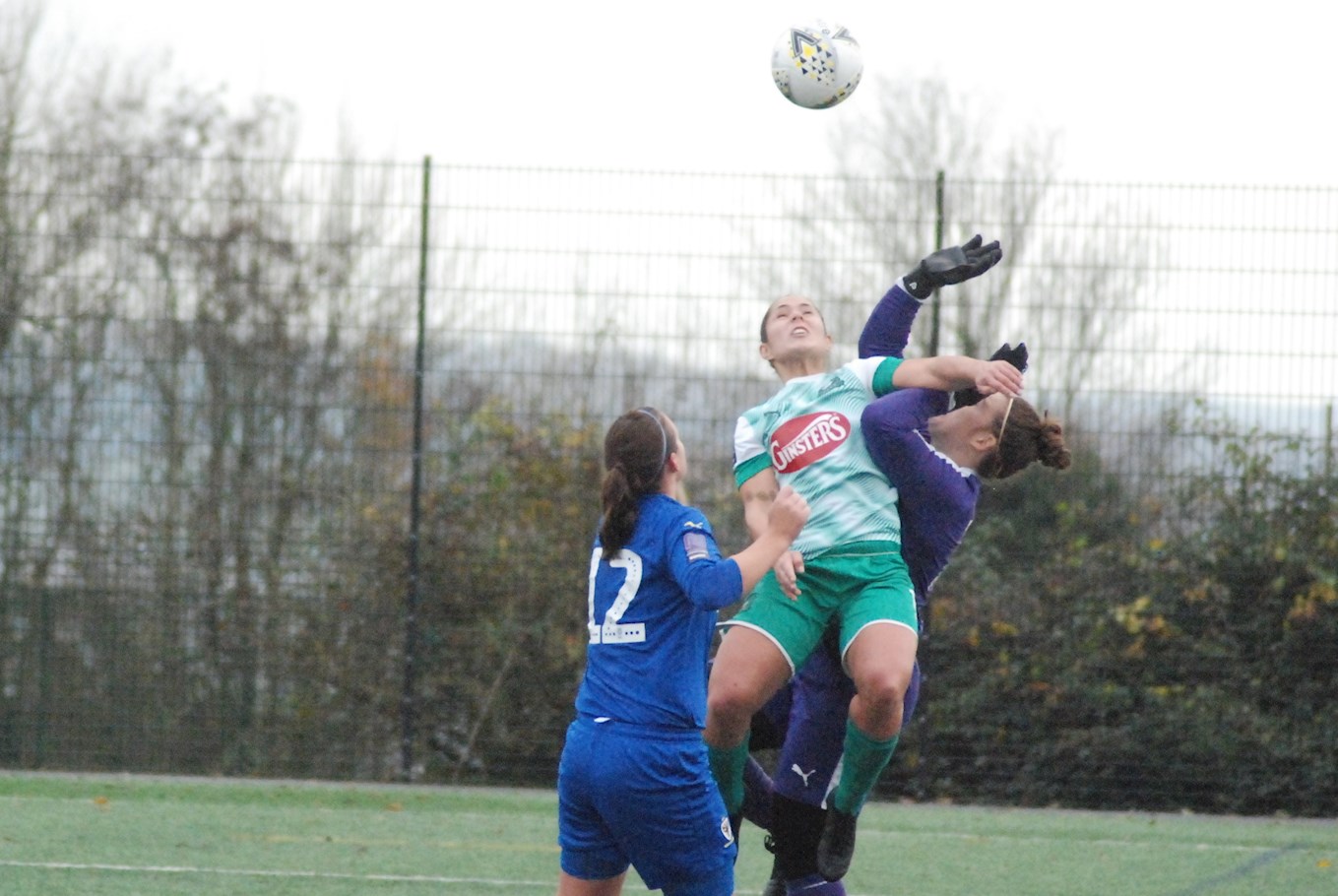 ARGYLE Ladies eased into the quarter-finals of the National League Plate competition in a game that can best be summed up as a typical battle of 'two halves'.

Wimbledon went into the game in a confident mood thanks to an unbeaten start in Division One South East and with Jessica Jones on holiday, Kayley Lane still nursing a knee injury and captain Kate Middleton donning the gloves due to the injury of regular custodian Ben Kyle, Argyle manager Dave Leonard brought into the squad Development player Beth Everson. This meant starts being given to Steph Beck and Ebony Dover.

Argyle started on the front-foot by not allowing the visitors to play themselves out of defence and their persistence was rewarded when, in the 11th minute following a foul on Becky Dandridge, Helen Bleazard’s dangerous free kick was parried by goalkeeper Charlotte Ferguson for the alert Natasha Knapman to pounce from three yards for the opening goal.

The Pilgrims then had a scare when a mistake by Mollie Taylor let in Wimbledon but Taylor quickly made amends by closing down Helen Ogle and forcing her to shoot wide.

Argyle’s pressure quickly earned them a second goal seven minutes later when a Ferguson clearance went to Becky Dandridge who rolled the ball to Knapman and, without hesitation, she let fly from 30 yards to score low into the corner of the net.

Two minutes later, the elusive Dandridge was up-ended in the penalty area but with the normal penalty-taker Middleton in goal, Zoe Cunningham stepped up to slam the ball into the net.

Argyle were now threatening to overwhelm their visitors when Amber Pollock just failed to get on the end of a great Bleazard cross. Cunningham then worked her way into the penalty area, only for Ferguson to pull off a fine save. The ball fell to Bleazard who once again found Cunningham but her effort was blocked.

With the tie virtually won, Argyle made a double substitution at half-time, with Beck and Taylor being replaced by Faye Ivall and Lydia Huntley. Unfortunately, the second-half performance didn't live up to the first.

Argyle were caught on the break after a free-kick had been cleared and Wimbledon's Kate Syanley raced up the field to cross but Middleton dived bravely at the feet of Georgia Heasman, sustaining a head injury for her troubles.

The tackles were now flying in with Pollock producing two crunching tackles. Wimbledon were then given a lifeline when in the 65th minute, when Burridge and Dandridge were deemed to have fouled Stanley, leaving Heasman to convert the spot-kick, but Argyle stayed strong in the closing stages for an impressive victory.

“It was the proverbial game of two halves, how different can two halves of football be,” said Argyle manager Dave Leonard. “The girls went in at half-time knowing that they had won the game and took their foot off the pedal and I don't know why.

“We saw a team looking to come into our league, they came down her confident but I don't think they played against a team that would put in such a press. We scored from three basic mistakes.

“I'm not angry, just disappointed that we didn't go on and put them to the sword and that's the first time we have not done that this season. I'm trying to instil good standards and I don't think we did that, we just dropped off it.”

The Development squad fielded a team of teenagers for this powerful win and the young squad started on the front foot with a Dani Wyatt effort cannoning off the crossbar. Isla Brumhead and Nicola Champion set up Hannah Brock who cleverly chipped the goalkeeper. Wyatt then knocked in the next four to make the half time score 5-0.

The second half saw 16 year-old goalkeeper Maisie Frickleton making her debut in senior football and the impressive Beth Everson who had come on as a late substitute for the first team. It was Everson who followed up a fierce Rachel Heron saved shot to set up Wyatt for her fifth goal, with Champion making it 7-0.

Argyle’s relentless pressure continued with Kiara Robins firing in an unstoppable volley. Nelinha Barros scored the next with Robins making it 10-0. There was then a long delay as the visitors captain Abigail Burrows sustained an injury which resulted in an ambulance being called. Beth Cowd added the next two with Champion completing the scoring.