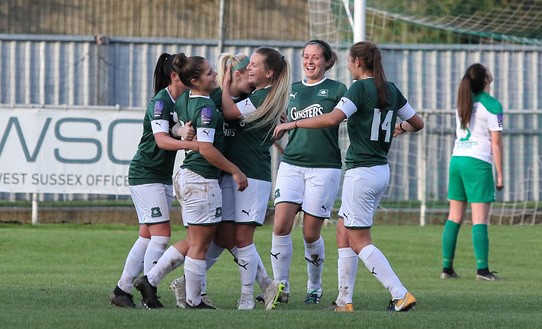 THERE is something special about this remarkable set of players who are slowly becoming title challengers. This was the eighth match away from home in a row for Argyle Ladies and they have all yielded victories.

Such is the strength in depth the Pilgrims have, manager Dave Leonard was able to put Steph Beck and Zoe Cunningham into midfield as their replacements. Argyle were also without coach Vicky Fannon, who was ill overnight, so Leonard called in Director of football Trevor Rodd to give a hand at short notice.

“Not only do we pull out all the stops on the pitch but off the pitch as well and we are grateful for it,” said Leonard.

“I can't tell you how delighted we are [with the result. I know people will say Chichester are bottom of the league, but it is a tough place to go to and they had their tails up after their close defeat against Watford last week. We put their fire out, we did a professional job.”

As expected, Chichester came out on the attack and shot narrowly wide in the early exchanges. Argyle responded with Leah Burridge finding Helen Bleazard who lost her footing before shooting narrowly off target.

The Greens slowly got into the game with captain Kate Middleton finding Natasha Knapman, who also dragged her shot wide. An Argyle corner was then cleared to Middleton whose effort was blocked.

Argyle kept up the pressure and Knapman just failed to get a connection on a superbly-flighted Bleazard free-kick. Chichester goalkeeper Isobelle Foster then made a superb double save – first to deny Bleazard with the ball rebounding to Becky Dandridge, whose follow-up effort was also saved

The pressure eventually told but they had to wait until the 40th minute to open the scoring, when Amber Pollock collected the ball some 35 yards out before firing in a half volley with an a absolute rocket.

It took Argyle just five minutes into the second half to double their lead when Mollie Taylor celebrated her 150th appearance by heading in at the back post. The game then became a little scrappy although Argyle continued to create chances.

Bleazard worked herself an opening only to shoot over while at the other end Chichester also fired over. Back came Argyle when good work between Cunningham and Bleazard ended with the latter's cross being headed over by Dandridge. Another Bleazard cross found captain Kate Middleton who drove the ball over the crossbar.

With so much pressure, another goal had to come and after a Cunningham effort was saved, Middleton appeared at the near post in the 71st minute to head in a Dandridge corner. The fourth goal came from another Dandridge corner which was headed out to Cunningham who looped the ball to the back post where the predatory Knapman headed in at the back post. Knapman knocked in her second goal with a clinical finish to complete the victory.

“It showed the quality of depth we have, with still having girls coming in, so it was a great result,” said Leonard. “I said to the girls after the match we should put the league to bed now for three games, which is all cup matches and we can't do nothing until December 8, when we play Watford.

“I genuinely think it will make the teams around us to think Watford struggled to beat them 3-2 last week and we have gone and posted five. We were very professional in our attitude and application and that was as good a result as we got away at Cardiff. We have got to go away from home and win games and we are on the front foot from the off.”