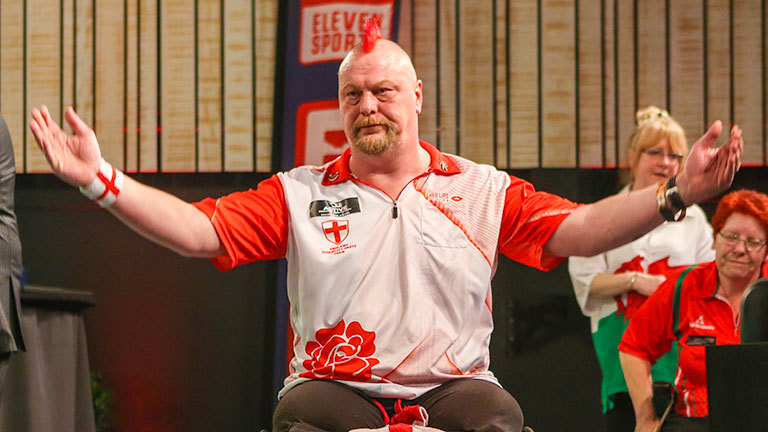 Snowy represented England in the sport’s first-ever World Cup in Belgium in February and threw the winning double as the team brought the trophy back across the English Channel.

Nicknamed ‘The Apache,’ double-amputee Snowy kept his cool to dispatch the winning dart against local rivals Wales in the final. Snowy, 49, is looking forward to the opportunity to take to the ‘hallowed’ pitch of Home Park.

“I’m really honoured to have been invited as a guest for the game against Bradford,” said Snowy, whose form saw him climb to the number one British ranking earlier this year. “I just hope that my wheels don’t damage the hallowed turf!”

A former member of the forces, Snowy’s services career took him all over the world. Whenever he was back in Devon, though, he would his best to catch the Greens in action.

Since returning to Plymouth, Snowy has been a driving force in helping more people get into the sport, founding the Plymouth Disabled Dart League in the process. The league is played on Thursday nights, across three venues in the city.

“I have been an Argyle fan for a long time, although work made it slightly harder to get to games,” said Snowy. “I am very excited to attend the game on Saturday and hope for a big win!”