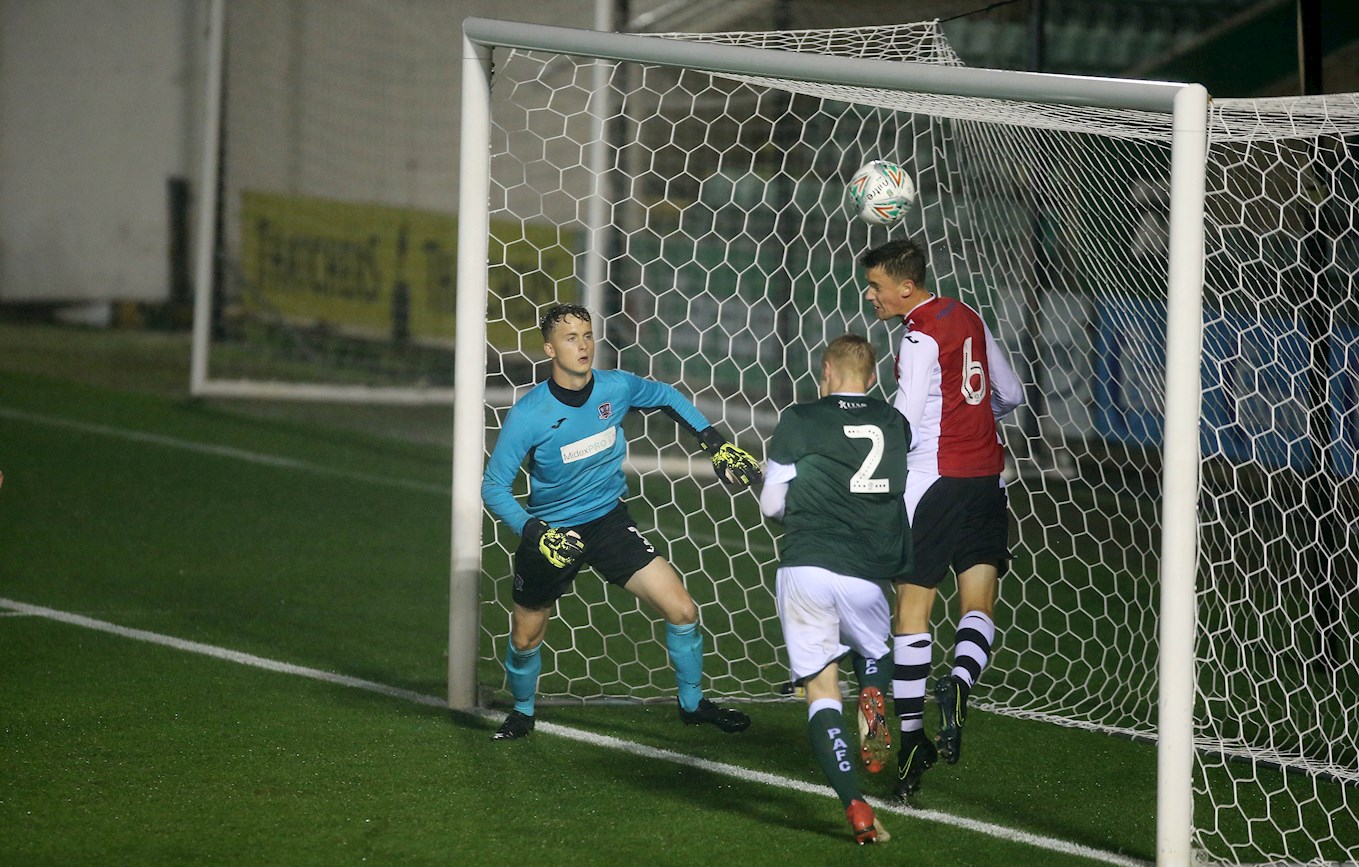 A LATE goal from Exeter’s Harry Ford was the difference on a night when Argyle were very unfortunate to bow out of the FA Youth Cup at Home Park.

Played in ferocious wind and rain, the Pilgrims controlled the game for long periods but were twice denied by the woodwork, plus some solid Exeter goalkeeping, opening the door for the Grecians to pinch a fortunate victory.

The first chance of the evening came from Reuben Collum charging down a hesitant Grecian defence and when Exeter goalkeeper Jack Arthur struggled to grasp the loose ball, the visitors were forced into a hurried clearance with Jeremiah Medine lurking ominously.

It was the sort of scruffy opening that proved to set the tone of the evening, as both teams battled to contend with a howling wind across the Theatre of Greens, but the Pilgrims were definitely the quickest in adapting to the awkward conditions.

A free-kick from the Argyle left flank was a losing battle against the ferocious wind, prompting a sensible decision to play the ball short and eventually win a corner. Although the second set-piece came to nothing, there was a pleasing clarity of thought from the young Greens.

A vicious cross from Reuben Collum, against the aforementioned wind, was just too high for Rubin Wilson on 16 minutes and the same man’s next cross won a corner for the Pilgrims, which was whipped over to the near post. A ricochet fell to a Green head nodding the ball goalwards but the visitors managed to scramble the ball away from under their own crossbar.

It was a Pilgrim chance that seemed to galvanise Exeter and an excellent deep cross picked out the run of Nelson Iseguan, who stabbed his effort on the bounce narrowly wide of Harry Townsend’s near-post.

The battle between Iseguan and Argyle’s right-sided Jarvis Cleal was one of many intriguing sub-plots to a positive first period for the Pilgrims, with both players looking the most likely source of a breakthrough moment in horrific weather conditions.

As the first half crept toward a breezy conclusion, the game had turned into an understandably scrappy affair, with set-pieces seemingly the biggest danger for both sides, but that was changed by a superb sweeping break from Argyle.

Rubin Wilson brilliantly cut inside before threading a pass into the right channel for Cleal, who dinked his cross to the edge of the area, where Medine steered a low drive goalwards and huge credit to Exeter goalkeeper Arthur for a strong hand in turning the ball on to the outside of the post.

It was a huge reprieve for the Grecians and, after what had been a decent spell for the visitors, a sense of nervousness had returned to the Exeter defence. At the other end, however, Argyle’s defensive trio of Isaac Burdon, Brandon Pursall and Ollie Tomlinson provided a calm platform to a confident opening half.

There was no wind advantage in the second period, as both sides contended with a howling gale blowing across the pitch and concentration was the key on a difficult night at Home Park.

Cleal remained a constant option for Argyle in attacking areas and his crisp pass into the feet of Rubin Wilson saw the rangy striker turn inside for a shot that looped harmlessly into arms of Arthur. Exeter responded with a Ford long-range drive that was equally comfortable for Townsend.

Jude Boyd then found space for a snap-shot well held by Arthur and a general spark into proceedings after a quiet start to the second period. Argyle reacted with their first change of the evening, removing midfield linchpin Carlo Garside for the fresh legs of Charlie Miller.

The game then descended into a scruffy affair and it needed a sharp pass down the line from Isaac Burdon for Rubin Wilson to break the pattern. When the Pilgrim forward was dragged down for a free-kick, Wilson picked himself up to drive the resultant set-piece narrowly over Arthur’s crossbar.

It was an evening developing into one moment of magic or, unfortunately, one mistake that could decide the outcome. The biggest plus for Devon’s two EFL clubs was a new generation of stars, from both teams, consistently attempting to play a fluid passing game on a night when it was easier to resort to the industrial hoof.

A clever drop off the shoulder from Boyd on 75 minutes offered Argyle a free-kick opportunity from 25 yards, on the left side of the pitch. Boyd took the shot and curled it nicely over the wall, but Arthur calmly read his intentions to gather the shot with little fuss.

From nowhere, Argyle were punished by one moment of inspiration from the Grecians and a speculative cross by Iseguan trundled through to Ford at the back post and he squeezed the ball past Townsend at the near post for a goal that was extremely harsh on the Greens.

The Pilgrims immediately introduced Oscar Massey for a tiring Rhys Shirley, while fellow substitute Miller looked to inject some urgency into the Greens, who were so very unfortunate to be behind in the game.

A succession of corners was the Argyle response and the second from Cleal drifted over Arthur before clipping his bar and into the safety behind the goal. It proved to be the last Pilgrim opportunity and a night when a positive performance failed to reap reward.

The Greens can be proud of their display and attention now switches to the second instalment of a Devon derby weekend, as we travel to St James Park in Sky Bet League Two tomorrow lunchtime.