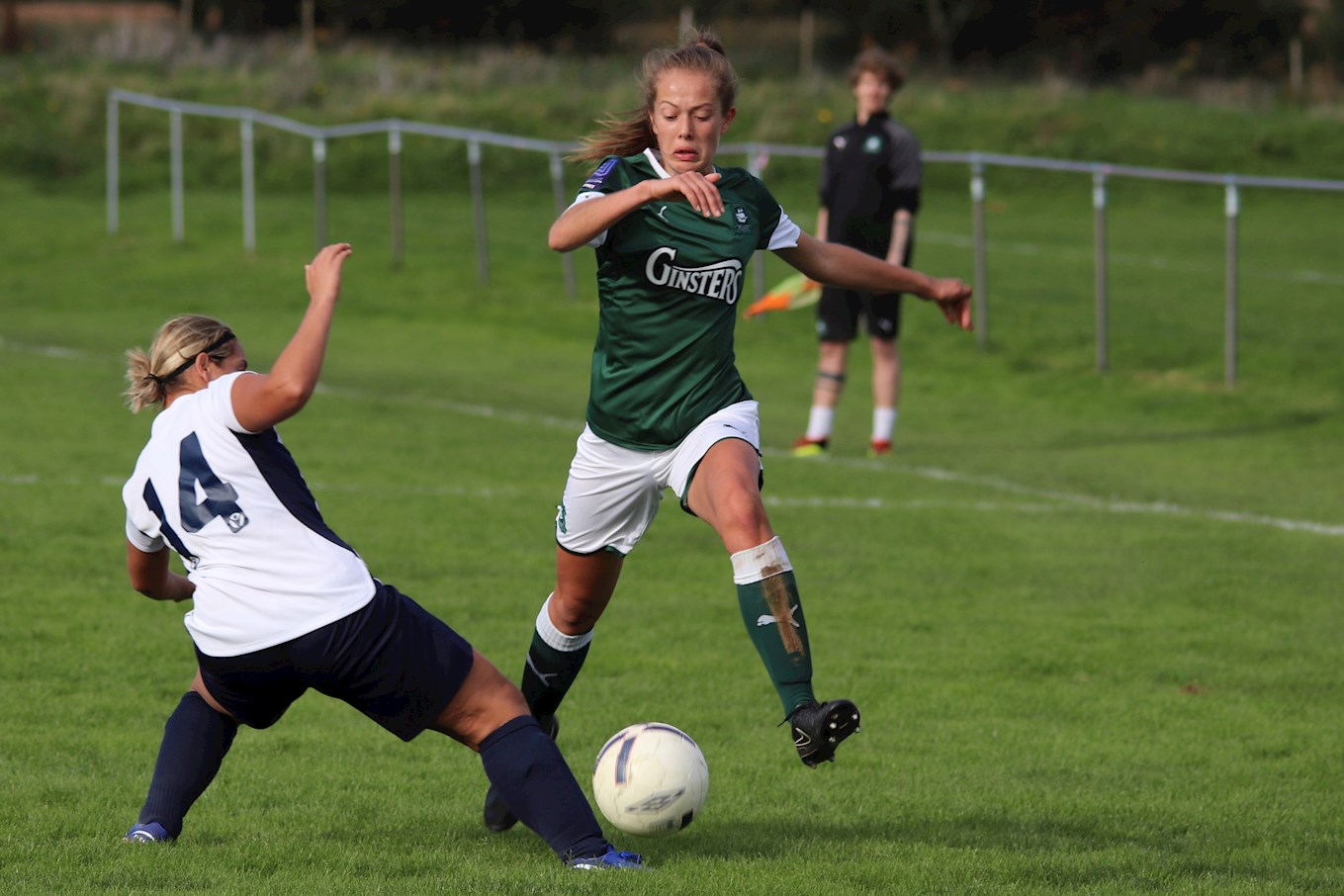 ARGYLE Ladies returned from South Wales with all three points thanks to a last-minute Natasha Knapman goal and some superb goalkeeping from Becky Kyle.

While the Pilgrims have certainly performed better this season, it was another terrific result in a very strong start to their campaign in the FA Women’s Premier League Southern Division.

Manager Dave Leonard said: “When we spoke in the huddle, I pointed out that if it wasn't for goalkeeper Becky Kyle, who pulled off two worldy saves, we would have been 3-0 down at half time.

“It was two of the best saves I have seen at this level of football. I pointed out to the girls she [Kyle] got you the three points. She put in a massive contribution. We are picking up results not just through her but to our defending, I can't give her enough credit, that three points goes down to Becky by the way she conducted herself in the first half.

“We had all the reports about how to counter-attack them and hit them on the break, only to find they changed their strategy to counter-attack us. It was about our worse performance of the season but you could say it made our performance even better against a team who I reckon are going to be a top-four team. They got in our face, they didn't allow us to play our free-flowing football and we looked a bit nervous and uptight.”

Argyle found life difficult in the first half and went behind in time added on when Corrie Williams headed in a corner. Leonard commented: “We got caught out when we struggled to change our shape after Mollie Taylor went off injured.

“She was replaced by Faye Ivall. We spoke at half-time that this wasn't my team. We came out for the second half having made a few changes and that pleased me. I knew we could get something out of the game through our never-say-die attitude.

Amber Pollock came on for Zoe Cunningham on the hour mark with Ebony Dover replacing Kayley Lane with 15 minutes to go. Then Argyle got the lift they needed when captain Katie Middleton converted a penalty awarded for handball.

Leonard added: “There was no way I was going to sit back and draw the game. I wanted to win the game and this is why I have so much confidence in the girls. We kept plugging away and kept shooting and Pollock had a great effort. But with time running out, who should pop up to grab the winner but that predator Natasha Knapman, who headed in a corner from close range.

“We just weren't on it but for me it wasn't about the performance, it was the character and the resilience of these girls who never give up. They are just relentless, they are just hungry with a never-say-die attitude, they don't know when they are beaten and just keep going.

This was a remarkable win for the young Development outfit, who came from 4-3 down to knock in five second-half goals to inflict the first defeat of the season on Feniton and to go top of the division.

Argyle knew that their title hopes would be over with a defeat but with Lucy Solloway helping herself to a hat-trick, they came away from East Devon with a battling win.

The game could not have started worse for the youngsters in the opening ten minutes. Feniton, with the strong wind behind them had Argyle on the back foot, and a poor clearance was seized upon by Stef Churchill-Matthews whose initial effort was saved by Maddie Walsh but she tucked away the loose ball.

It quickly became 2-0 when an unforced defensive error allowed former Argyle player Kate Finch to score. This goal seemed to wake up the young Argyle team and they started to play and pass the ball around. Unfortunately, they suffered a blow when Leah Johnson went off with a groin strain to be replaced by Rachel Javan, who was back from injury herself.

Maisie Williams was causing panic up front and after being brought down converted the spot-kick. A minute later, a great ball over the top of the Feniton defence by Jodie Randall found Nicola Champion, who made no mistake to level the scores.

Argyle were chasing the game again when the defence didn't deal with a corner, leaving Amy Salter to tap in. The reaction was positive with wide players Beth Everson and Lucy Solloway proving a threat with their pace. It was the latter who latched on to a great through ball from Beth Cowd to level the scores with a great strike. Once again, indecisive defending allowed Finch to give the home side a 4-3 lead.

Argyle attacked from the off in the second half with Champion having a couple of early chances well saved by Caragh O'Brien. Undeterred, it was a Williams through ball that allowed Ellie Bishop to slot home the equaliser. And O'Brien could do absolutely nothing about Kiara Robins’ 35-yard effort that found the top corner of the net.

The team were now playing great football and a Bishop though ball saw Everson fire a fierce shot across the face of the goal for Solloway to finish the move off. The seventh goal was a mirror image, with an Everson shot being half saved and Williams snapping up the rebound.

Feniton managed to pull a goal back through Churchill-Matthews but Argyle added their eighth when Solloway followed up a saved Champion effort to complete her hat-trick. Just before the final whistle, Everson rounded off her good performance when she finished off a move between Williams and Bishop to complete the scoring.

Manager Rob Bonney commented: “We got off to worst of starts but the girls showed a lot of character to get themselves back into the game. What really pleased me was how the players took ownership of their mistakes.

“They did not hide or blame anyone else but themselves, that is a great attribute to have. Some of our play was brilliant to watch and we were a lot more clinical in front of goal. We know we have to iron out the silly errors but this is a work in progress and we just need to keep improving week by week.”