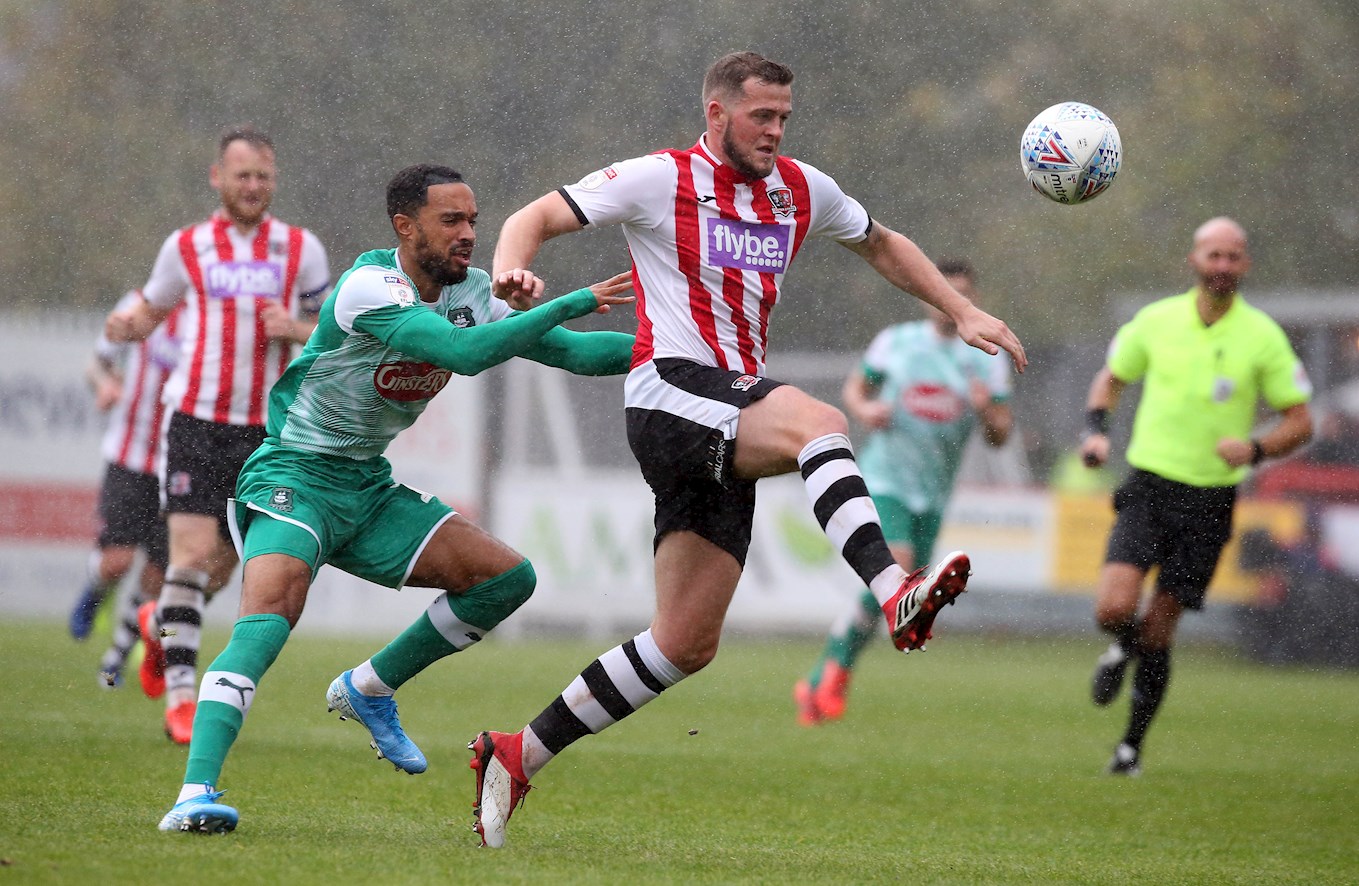 A DESPERATE Devon derby for Argyle, as Exeter City inflicted their biggest win over the Greens in almost a century.

A penalty from Nicky Law on the stroke of half-time changed the tone of what had been a poor, but relatively even, game and a Tom Parkes header immediately after the restart proved fatal to Pilgrim hopes.

Randell Williams turned the screw even further with a clever third midway through the second period and the final chapter to a horrible day was a brace from Law seven minutes from time.

Argyle manager Ryan Lowe opted for Josh Grant as his man to replace the suspended Scott Wootton in defence. It was the only change from Tuesday’s 4-0 demolition of Leyton Orient at Home Park, with Danny Mayor again having to sit among the replacements behind George Cooper, who provided three assists in midweek.

Perched alongside Mayor on Argyle’s attack-minded bench was striker Ryan Taylor, back from the injury that had kept him in the treatment room since the Leasing.com Trophy win at Swindon in early October.

Exeter City boss Matt Taylor was far more ruthless in his team selection, making six changes to the side that went down 3-1 at Scunthorpe United in midweek, a second successive defeat for the Grecians.

Given their opportunity in the cauldron of a Devon derby were Law, Pierce Sweeney, Craig Woodman, Jake Taylor, Williams and former Pilgrim loanee Lee Martin.

Despite a tough week for the home side in Sky Bet League Two, the Grecians just edged last night’s Devon derby appetiser at Home Park with a narrow 1-0 win over the Pilgrims in the FA Youth Cup.

If that was a boost for Exeter, the Argyle impetus was provided by a magnificent noise being generated by the travelling Green Army, although they briefly quietened to anxiously watch a deflected effort from Jake Taylor spin wide of Alex Palmer’s far post.

The resultant corner was half-cleared before being lofted back into the box for Lee Martin, who was forced wide by Niall Canavan and steered the eventual shot high into the raucous arms of the Pilgrim support.

Exeter’s bright start continued with a deep cross from Law nodded wide by Ryan Bowman and a definite chance for the former Torquay United striker. Unlike last night’s affair between the Devon juniors, which was dominated, and often spoiled, by the swirling wind, conditions were a little more favourable for the seniors.

Argyle were gradually finding some rhythm in their play when a quick break involving Law and Bowman released Williams in the right channel, prompting a robust challenge from the retreating Callum McFadzean, who could have no complaints about his subsequent yellow card.

The Pilgrims conjured their first genuine chance on 17 minutes and it stemmed from a clever pass by Argyle’s former Grecian, the in-form Joel Grant. Antoni Sarcevic was the beneficiary, breaking into the box, but his low drive was well held by goalkeeper Jonny Maxted.

McFadzean was enjoying an ongoing tussle with Williams, winning the latest encounter on 23 minutes with some excellent covering. In truth, however, it was an opening period where endeavour was overshadowing quality, a point emphasised by an overhit pass from Cooper that was far too strong for the run of Zak Rudden.

The striker on loan from Rangers won a free-kick in the left channel from his next involvement. Joe Riley was given the responsibility from 25 yards and struck it well, but straight down the throat of Maxted. Exeter responded with an incisive break down the right and a cross for Lee Martin, who stabbed his shot on the stretch well over the bar.

As the half drew to a close, it became increasingly scrappy in the midfield areas and a blank scoreline was probably the right outcome but that all changed in one moment of scruffiness from the Pilgrim defence.

Josh Grant was caught the wrong side of Lee Martin and lunged into the fair-haired forward in the penalty area. The Grecian forward took his chance to stumble in the turf and referee Darren Drysdale immediately pointed to the spot for what looked a soft decision.

Argyle complaints were abruptly waved away and Law remained the calmest man in the building, guiding his penalty straight down the middle with Palmer diving to his right. It was a well-taken spot-kick and the Greens had to regroup for an important 45 minutes to come.

The worst possible start to the second period arrived in the form of Parkes glancing a near-post header into Green net after a whipped free-kick from the left boot of Williams and a Devon mountain to climb for the Pilgrims.

A massive chance to change the momentum arrived when a loose backpass from Exeter fell to Joel Grant, who skipped past the onrushing custodian Maxted but credit to centre-back Aaron Martin for reading the situation and executing a goal-saving tackle for the Grecians.

Lowe reacted to the dilemma facing his team by withdrawing McFadzean and Rudden for Mayor and Byron Moore. The hope was to change a frustrating pattern to the game for Argyle, just as the weather took a change for the worse, with the wind and rain now reaching Youth Cup proportions.

Gradually, Argyle’s tempo was improving and a succession of crosses from Cooper caused mayhem in the home defence but the lucky bounce you need in a crowded penalty area failed to arrive for Byron Moore, and the Grecians were reprieved even further by a generous offside flag.

The Pilgrims continued to push forward and the combination of Moore and Mayor was definitely having an impact, but disaster struck for the Greens on 66 minutes, when the lively Williams latched on to a threaded pass before dinking a calm finish beyond the despairing dive of an exposed Palmer.

Realistic hopes of getting something from the derby had effectively gone and Argyle’s new priority was to avoid a humiliating defeat at their fiercest rivals. Billy Clarke replaced Joe Edwards in a last roll of the dice from Lowe to at least get something positive from the game.

There was a brightness in the play of Williams that summed up the confidence flowing through Exeter ranks, although he was a happy bystander as the Grecians piled on the Pilgrim misery.

Taylor came within a whisker of scoring a belter from 25 yards but his disappointment at seeing a cracking effort rebound back off the post quickly turned to joy, as Law pounced on the loose ball with a stroked finish into the empty net.

It was a final act for the excellent Law, who was replaced by Matt Jay for the final five minutes. For those of a Green persuasion, it was a painful five minutes on top of a rough day to be a Pilgrim.

Well played Exeter, one to forget for Argyle.