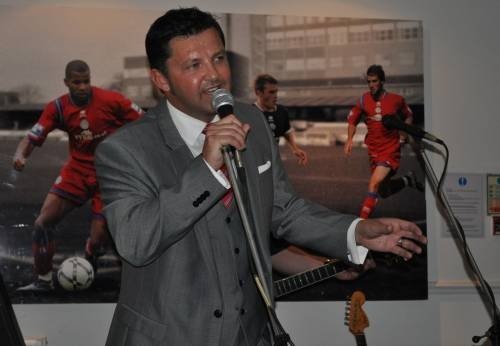 OUR half-time guest for the visit of Scunthorpe United will be former Pilgrim forward Nicky Banger.

The Hampshire-born striker made 11 appearances for the Greens under Paul Sturrock in Argyle’s 2001-02 record-breaking title-winning season, netting twice – including one on his debut, a 3-1 win over Swansea City.

Scoring debut goals, by this point, had become a bit of a trademark for Banger, who netted a debut hat-trick for hometown Southampton in a League Cup tie against Rochdale.

After five years with the Saints, Nicky moved to Oldham Athletic for reported fee of £250,000 in 1994, spending three years at Boundary Park before moving on to Oxford.

Spells at Dundee and Scunthorpe followed, before Banger signed for Luggy’s Pilgrims on a short-term deal. A series of injuries limited Nicky’s opportunities to earn a longer stay at Home Park, and he moved on again in November 2001. Spells with Torquay United, Eastleigh, Merthyr Tydfil, and Woking followed.

Upon retiring from playing, Nicky has worked in commercial operations at a number of football clubs, including Woking, Eastleigh, Aldershot and Havant and Waterlooville. Currently, he serves as Chief Executive Officer of The Knights Foundation - which provides support to disabled children and their families.