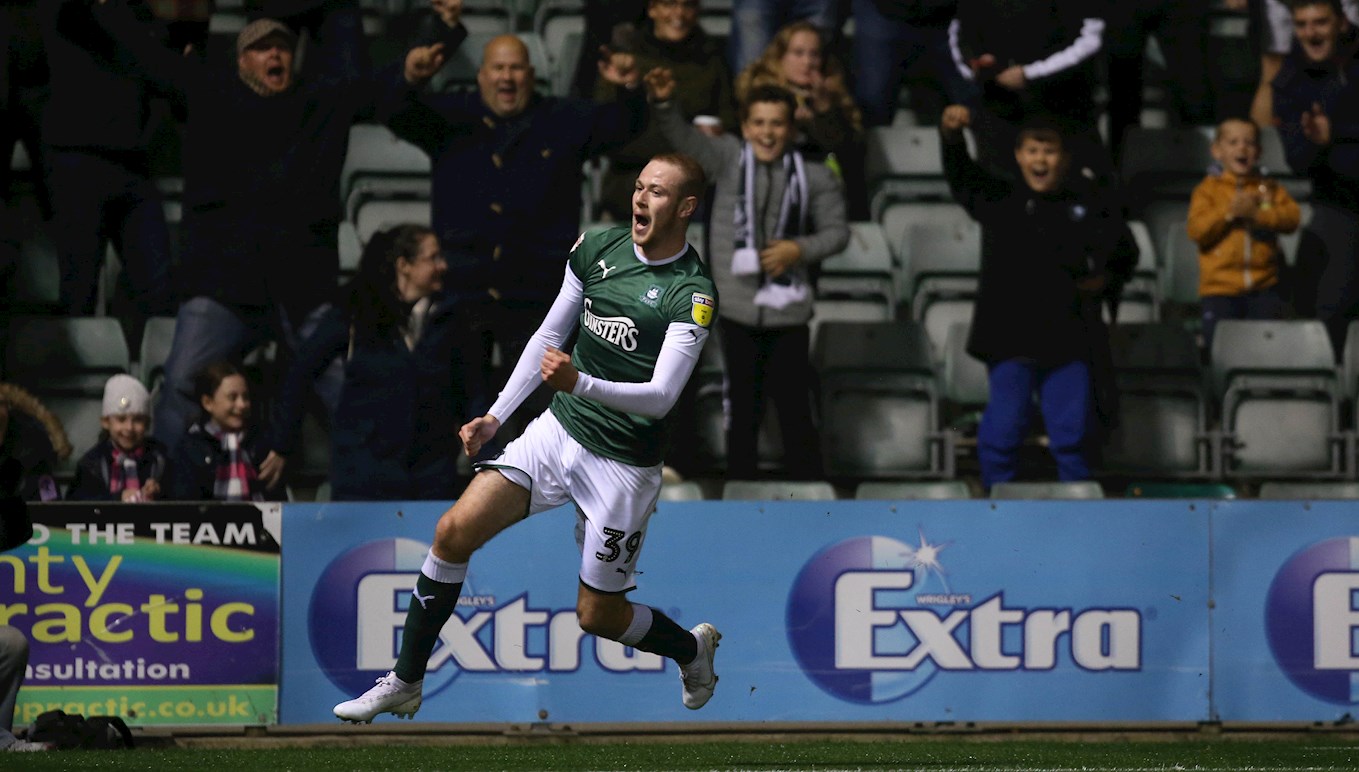 A DEVASTATING first-half display from Ryan Lowe’s rampant Pilgrims ensured that Carl Fletcher’s return to management at Home Park was an unhappy one.

Joel Grant’s fourth goal in as many games fired the Greens into the lead on 14 minutes, before Zak Rudden headed his first league goal moments later. Callum McFadzean put the result beyond doubt on 35 minutes with a close-range finish, before Joe Widdowson’s own-goal summed up a miserable evening for the visitors, and sent Argyle heading into Saturday’s Devon Derby with Exeter City full of confidence.

Despite being only a third of the way through the Sky Bet League Two season, this match represented the second Tuesday night meeting with Orient at Home Park this campaign. The Greens went into the clash with the O’s one to the good, having triumphed 2-0 in the opening round of the Carabao Cup back in August.

It did not seem sensible, though, to believe that result would have any bearing on this outcome. Orient were heading into a new era, under former Pilgrim captain and manager Carl Fletcher, who was officially taking the manager’s seat vacated by the tragic passing of Justin Edinburgh in the summer. Although the clash at Home Park was his first in the dug-out for Orient, ‘Fletch’ watched on from the stands as his new side put in a stunning performance to win by four goals away at Grimsby just a few days earlier.

For their part, though, Argyle were beginning to evidence a turn in their own fortunes. Unbeaten in five games in all competitions, the Greens had recovered from a September slump to return to the brink of the play-off places after Saturday’s victory over Carlisle.

The players’ new-found resolve was acknowledged by Lowe in his selection; making the brave decision to leave talismanic midfielder Danny Mayor on the bench after his return from a one-match ban.

Lowe had made a point in the build-up to the game to praise the work Fletcher put in during challenging times at Home Park. He was also clear that, come kick-off, the welcome mat would be firmly withdrawn. The Argyle manager could have only dreamt of the opening-term annihilation that was to come.

The emerging partnership of Joel Grant and Rudden set the tone early on, with Grant’s weighted through ball nearly finding the Rangers loanee in the clear, save for the quick reactions of goalkeeper Dean Brill.

Rudden returned the favour moments later, sending his strike partner in behind with a smart angled header. Grant cut back inside, shaping to shoot on his right foot, but towering defender Marvin Ekpiteta stole the ball from the Jamaican’s toes.

Orient, keen to provide their new boss with a winning return to Devon, responded through James Dayton who ghosted down the right channel before curling one wide of Alex Palmer’s far post. At the time, Fletcher might have been encouraged. It was a false dawn.

On 14 minutes, the Greens had their first. George Cooper’s superb deep cross found the head of Antoni Sarcevic at the far post. The midfielder caught it sweetly, but Brill denied him with a superb save from point-blank range.

The ball flew up into the air, and was helped towards goal by Rudden, only to be superbly denied by Brill again. The Orient ‘keeper did not deserve to concede, but was finally overcome by the third attempt, thumped emphatically home by Joel Grant for his fourth in as many games.

The visitors felt they had a claim for handball against Rudden in the build-up to the first goal but could have no complaints about the legitimacy of Argyle’s second, with Cooper again the architect.

The Pilgrims’ tactic of sending early deliveries into the Orient box was causing havoc, and eventually took its toll as the visitors repeatedly failed to clear their lines. The ball fell at the feet of Cooper, who whipped a ball to the near post, where Rudden had timed his run to absolute perfection to flick beyond Brill and into the far corner for his first goal in the EFL.

The game remained remarkably open, with both sides getting the ball down and playing on the carpet-like turf of Home Park. Unfortunately for Orient though, it was Argyle who did so with a touch more guile. Just after 30 minutes, the best move of the match yielded Argyle’s third goal, sending the Green Army into nosebleed territory.

Rudden, with his back to goal and a defender planted firmly against him, dropped a deft header perfectly into the path of Sarcevic, who burst between the lines and hurtled towards the box.

His ball across the box dropped narrowly behind the run of Joel Grant, but rolled kindly on for McFadzean, who took a touch to set himself, before swinging a right peg at the ball, sending it beyond the despairing lunge of Brill to net his fourth of the season, and his first since the cup tie against the same opposition in August.

The forcefulness of Argyle’s ruthless attacking spirit appeared to be having something of a psychological impact on a beleaguered Orient defence, who contributed to their own downfall on the brink of half-time.

In the thick of things once more, and exhibiting the confidence of a player in the prime of his Home Park spell, Cooper drove the ball into the area with full force. Alert to the danger, Brill placed two fists on the ball and punched it away from goal, only to watch it cannon off the back of Widdowson and roll apologetically over the goal-line to complete a miserable first-half for the visitors.

On returning to the dressing room at half-time, Rudden bore the brunt of the frustration from the 200-plus travelling Orient contingent for his involvement in a dubious opening goal. That level of scrutiny appeared not to have been placed on the Orient back-line which had been torn apart time and again.

If we were playing cricket, the Greens’ would have already declared, and the second-half was played out with the air of a foregone conclusion. With the points secure, Lowe opted to withdraw the three most devastating players from the action; Cooper, Rudden and Grant clocked off early, with Mayor, Byron Moore and Billy Clarke introduced for the closing stages.

Orient, spurred on by a sense of pride, nearly snatched Palmer’s clean sheet away from him in the dying stages, but a firm hand from the West Bromwich Albion loanee denied substitute Louis Dennis the small consolation. From the resultant rebound, fellow substitute James Alabi fired inexplicably wide from six yards.

Attention had switched to the Devon Derby in the stands, too. Exeter’s defeat at Scunthorpe sets up a fascinating clash on the weekend at St James' Park.

The one blot on an otherwise perfect copy-book for the Greens came in the form of Scott Wootton’s fifth yellow card of the season.