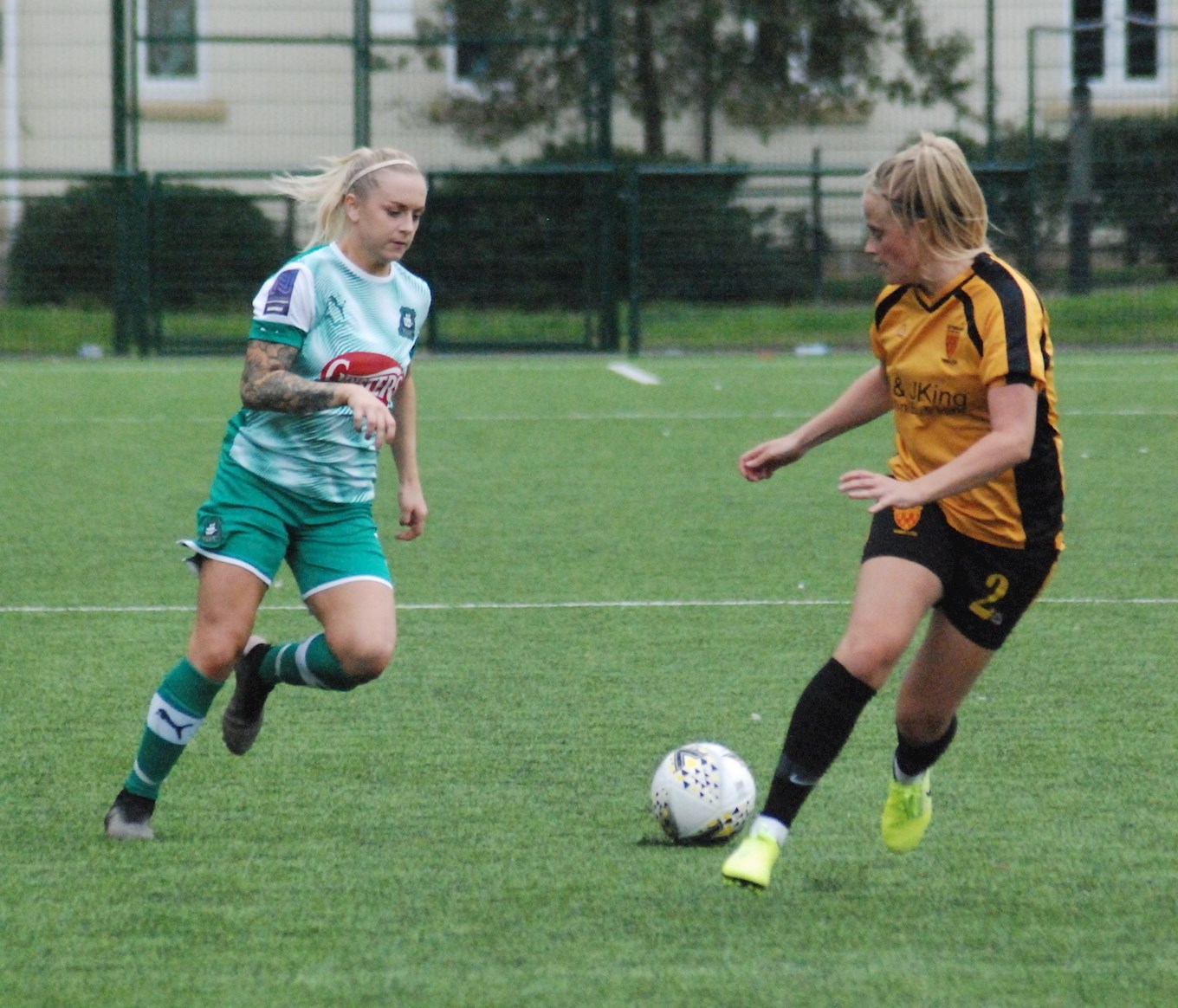 It was a match that saw the Pilgrims play some of their best football for some time. Watching on was Argyle players Tafari Moore and Joel Grant, who were impressed with how well the girls played: “We will be back,” said Moore. Taf and Joel also took time out after the game to have a chat with some of the players, which was greatly appreciated.

Argyle went into the game on the back of an excellent 2-0 win at Gillingham and manager Dave Leonard decided to go with almost the same team, with teenager Beth Everson returning to the Development team and Helen Bleazard, who missed the game at Gillingham, along with Ebony Dover and Holly Cole on the bench.

The Greens took time to settle into the game with their final pass not quite reaching the target, despite good build-up. Kayley Lane and Natasha Knapman both went close, with Amber Pollock having her shot saved and Knapman's follow-up effort going wide.

Pollock, who was playing wide on the right, continually tormented the visitors’ defence with some great runs and crosses. Argyle eventually got the goal their efforts deserved when Faye Ivall set Jessie Jones on a run into the penalty area, where she was unceremoniously felled, leaving skipper Katie Middleton to fire in the 25th-minute spot-kick.

Jones and then Knapman both went close as Argyle started to dominate the game. The Pilgrims doubled their advantage in the 36th minute when Pollock set up Kayley Lane, who scored at the second attempt, and Knapman made it 3-0 minutes later when she got on the end of another pinpoint Pollock cross.

Argyle continued on the attack in the second half, with Burridge setting free Knapman but she was denied by the goalkeeper diving at her feet. Twelve minutes after the restart, Lane made a quick break to find Cunningham, and her cross was bundled into the net at the second attempt by Lane. Argyle were now playing some scintillating football, with Pollock, Jones, Dandridge and Lane all going close.

Keynsham got their consolation with a rifled drive past into the home net but, with ten minutes remaining, Knapman threaded a pass to Jones, who made no mistake. Jones had another go on 87 minutes but her shot was saved. The rebound fell to Bleazard, who slammed it into the net.

Manager Leonard said: “I was very pleased. In places, we looked really good. We controlled the game well.

“Shooting in the final third will be something we will be concentrating on this week in training. I think the scoreline flattered the opposition. The most pleasing part was the 203 people who came out to watch us, I hope they weren't disappointed and they saw that we can play. We controlled the game for long periods but our entry in the final third was very average.”

Despite having seven debut players in the starting line-up and another two on the bench the new look Development side started off the season in confident fashion, eventually going down 3-2 at Alphington in the FA Women’s South-West League Western Division.

The home side took the lead when Argyle lost possession in midfield and a simple through ball to Helen Kukor allowed her to open the scoring. Undeterred, the youngsters were next to threaten when Beth Cowd caused havoc in the opposing penalty area, only for her final effort to be blocked.

Next to try their luck was Maisie Williams and Leah Johnson but the home ‘keeper saved comfortably. The equaliser looked on the cards but it was Alphington who increased their lead through Kukor again. Once more she found room on the edge of the penalty area and shot home past Maddie Walsh. The game moved from end to end up until half time but with no further goals.

The second half followed the same pattern as the first, with Argyle enjoying the majority of possession without being able to make a breakthrough. It was Alphington who increased their lead further when Kukor completed her hat trick.

With nothing to lose, Argyle changed their formation and used all three substitutes. Dani Wyatt had an effort pushed over the crossbar by the ‘keeper, who was then tested by Leah Johnson who had her shot pushed around the post. Alphington did have sporadic counter attacks and Maddie Walsh brought off a great save from the ever-dangerous Kukor.

The youngsters finally made a breakthrough when Steph Beck found the top corner of the net with a great free-kick. Argyle now sensed they could get something out of this game and piled on the pressure. A lofted through ball from Scarlett Williams saw Wyatt bravely go into a challenge with the home ‘keeper, the ball broke loose to 16 year-old Nelinha Barros, who lobbed the covering defenders to make it 3-2.

Unfortunately, they ran out of time and did not have a chance to grab an equaliser. Manager Rob Bonney said: “Despite having a lot of possession, we were not clinical enough in front of goal. Some of our approach work was decent enough but unless we finish it off, teams will always have a chance.

“We played a decent Alphington team who were in with a shout for the league until the final two games of last season, so this was a tough start. We made elementary mistakes and were certainly punished. This team is a work in progress and there is a lot of work to be done, but the signs are encouraging.”