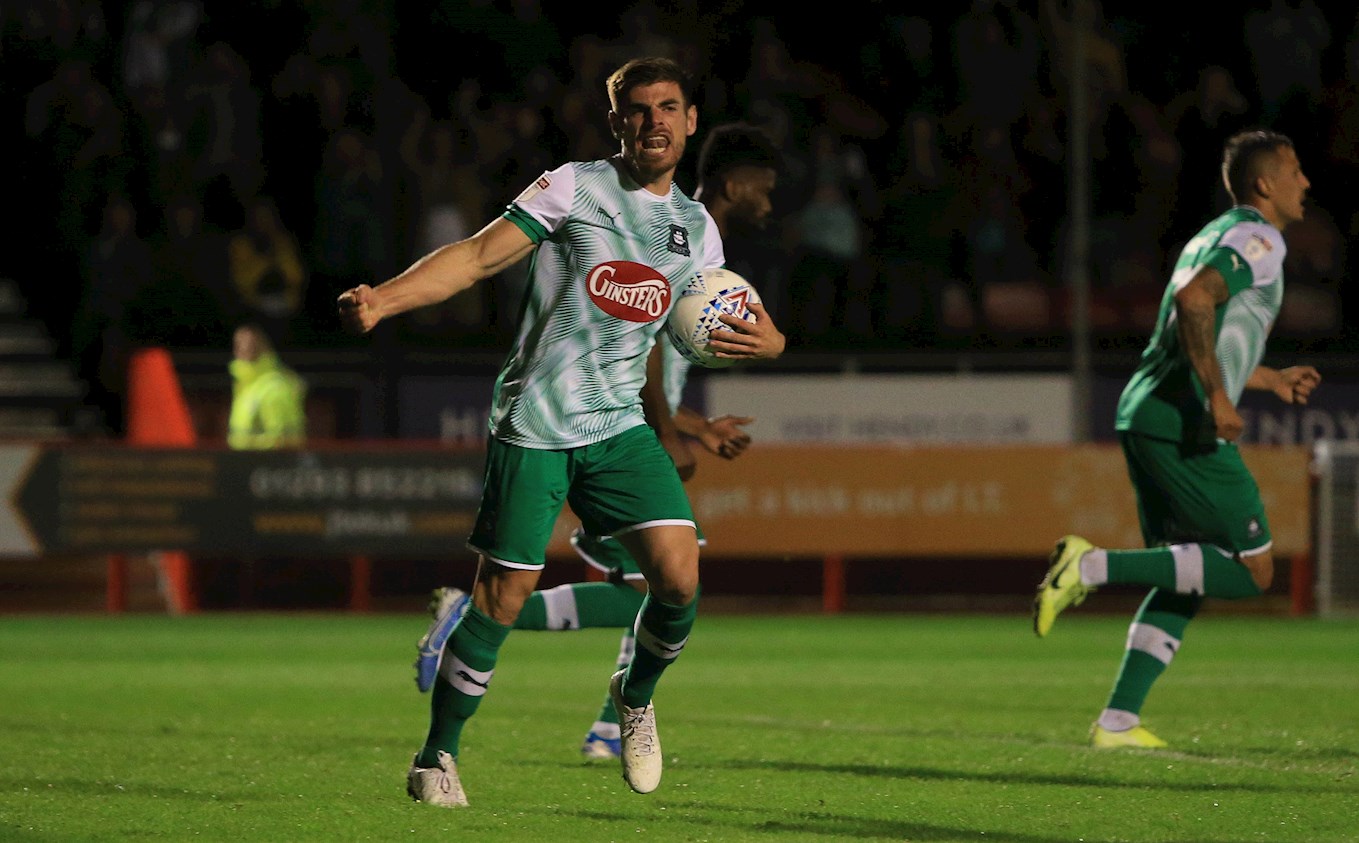 JOE Edwards’ second-half brace was not quite enough to earn Argyle all three points in a topsy-turvy battle at The People’s Pension Stadium.

The Pilgrims’ utility player, operating at wing-back on this occasion, scored twice late in the game to bring the Greens back from their half-time 1-0 deficit. Substitute Ollie Palmer netted an 85th minute penalty to rescue a point for the hosts, after Reece Grego-Cox, who scored Crawley’s opener on nine minutes, was fouled by Callum McFadzean.

The Pilgrims headed to The People’s Pension Stadium looking to overcome an unprecedented hoodoo in the month of September, in which they have not won a game since 2016, when they beat Cambridge United 2-1 courtesy of a Jordan Slew winner. This season’s autumn blip culminated in Saturday’s 1-0 defeat at Port Vale, leaving Ryan Lowe’s side sitting narrowly outside of the Sky Bet League Two play-off places.

With that in mind, the manager opted for three changes from the Pilgrims’ late defeat in the Potteries three days earlier, with Joel Grant returning to the starting eleven for the first time since the second game of the season.

The other changes occurred in defence, where Will Aimson and Gary Sawyer, both promoted from this division at their last attempt, replaced Niall Canavan and Scott Wootton in the back line - alongside Josh Grant.

Crawley, by contrast, have been gradually improving as the season progresses, winning three of their four home encounters in the process. The Red Devils’ manager, Gabriele Cioffi, made only one change from his side’s 1-0 home win over Mansfield at the weekend, with Mason Bloomfield replacing Palmer up front.

Argyle, backed by a vociferously vocal travelling contingent of 800 Green Army, opened brightly. First, Danny Mayor threaded Edwards in on the right wing, only for his cross to be deflected away to safety, before Byron Moore danced behind the Crawley back four to see his shot from a narrow angle palmed away by Glenn Morris.

The problem from a Green perspective, though, is that they have often enjoyed excellent opening spells, only to be undone cheaply at the other end. It proved to be the case again on a warm West Sussex night, as Town dangerman Bez Lubala found enough space on the left flank to roll the ball hopefully towards the penalty spot, where Grego-Cox clipped the ball goalward. The forward did not catch it sweetly, but it was clean enough to see the ball tumble into the far corner past a scrambling Alex Palmer.

The Greens should have been level within 10 minutes of falling behind, with some superb intricate play from Antoni Sarcevic on the edge of the area releasing Moore in behind. The Pilgrims’ pacey strikey nipped between the defensive line and Morris, took a touch around the ‘keeper, and shot from 10 yards, but the recovering Morris saved.

From the resultant corner, Argyle continued their hearty response. Aimson won a header at the far post, which Joel Grant held up well, before laying off to the Pilgrims’ centre-half. The import from Bury nearly marked his full debut with a goal, but his low drive was once again kept out by Morris – who had been the busier custodian in the opening half an hour, despite the scoreline.

In fact, in many ways, the opening term was a representation of Argyle’s season so far in a nutshell. Territorial dominance, inspired by some beautiful passing play between both boxes, and not much to show for it.

This was epitomised by a superb passing move which found Mayor on the edge of the area via a one-two with Joel Grant. In shooting range, Mayor shaped to shoot, only to be fouled by a Crawley defender. Determined to get his shot away, Mayor stumbled on towards the box and struck off-balance, the ball screwing off-target. Upon turning to consult referee David Rock, he was informed that he had spurned his advantage and there would be no free-kick.

As the half-time whistle blew, Argyle had accrued 64% of the game’s possession; seven corners to Crawley’s two; four shots on target to Crawley’s one. Of course, in the one stat that mattered, the Greens trailed.

Argyle began the second-half as they had finished the first, penning the hosts back into their own territory. As the clock ticked over 50 minutes, the Pilgrims’ corner-count entered double figures. A flurry of deliveries into the box eventually conjured an opportunity for Argyle – and Aimson, again.

Baxter’s deep delivery was nodded across goal by Joel Grant, and turned venomously toward goal by Aimson, but his volley from six yards was somehow kept out by another superb save from Morris - who was hell-bent on holding Green tide at bay.

One got the sense that, if the Pilgrims were able to crank the Crawley back-line open and grab a deserved equaliser, they could go on and snatch the game. Baxter, sensing that the intricate methodology was not bearing fruit, took matters into his own hands, striking from range. Once again, Morris was equal the Argyle assault, tipping the ball away from danger. Skipper Sawyer also had a pop from range, striking with surprising venom, but his effort swerved off-target.

Eventually, the Greens’ pressure took its toll. McFadzean, who had bounded up and down the left-wing all game to no avail, finally delivered the cross befitting his efforts. At the far post, Edwards leapt, unmarked, to head sweetly down and into the bottom corner in front of a Green Army that nearly swallowed him whole in the resultant celebrations.

Crawley, who had defended with discipline for much of the game, began to show signs of strain. Tails up, Argyle surged forward in search of a second, which came just five minutes after their leveller.

The catalyst for the move, as it often is, was Argyle’s no.10. Leaving his marker on his back-side deep into his own half, Mayor turned with embarrassing ease, launching an Argyle break. He found Sarcevic bounding into the Crawley half, and the Argyle midfielder laid the ball on a plate for Edwards, who smashed into the back of the net, via a deflection.

With the points looking as though they would be heading back to Devon, there was another critical twist in the tale. On a rare second-half offensive foray, Crawley found Grego-Cox down the right. He forced his way beyond McFadzean and into the box. The Greens’ wing-back, perhaps fatiguing, leant too heavily into the challenge. From the spot, substitute Ollie Palmer levelled matters.

At full-time, the Crawley supporters seemed the happier of the two sides, and goalkeeper Morris was announced as man-of-the-match.

So very near, for Lowe’s side. When it fully clicks, it could be spectacular.