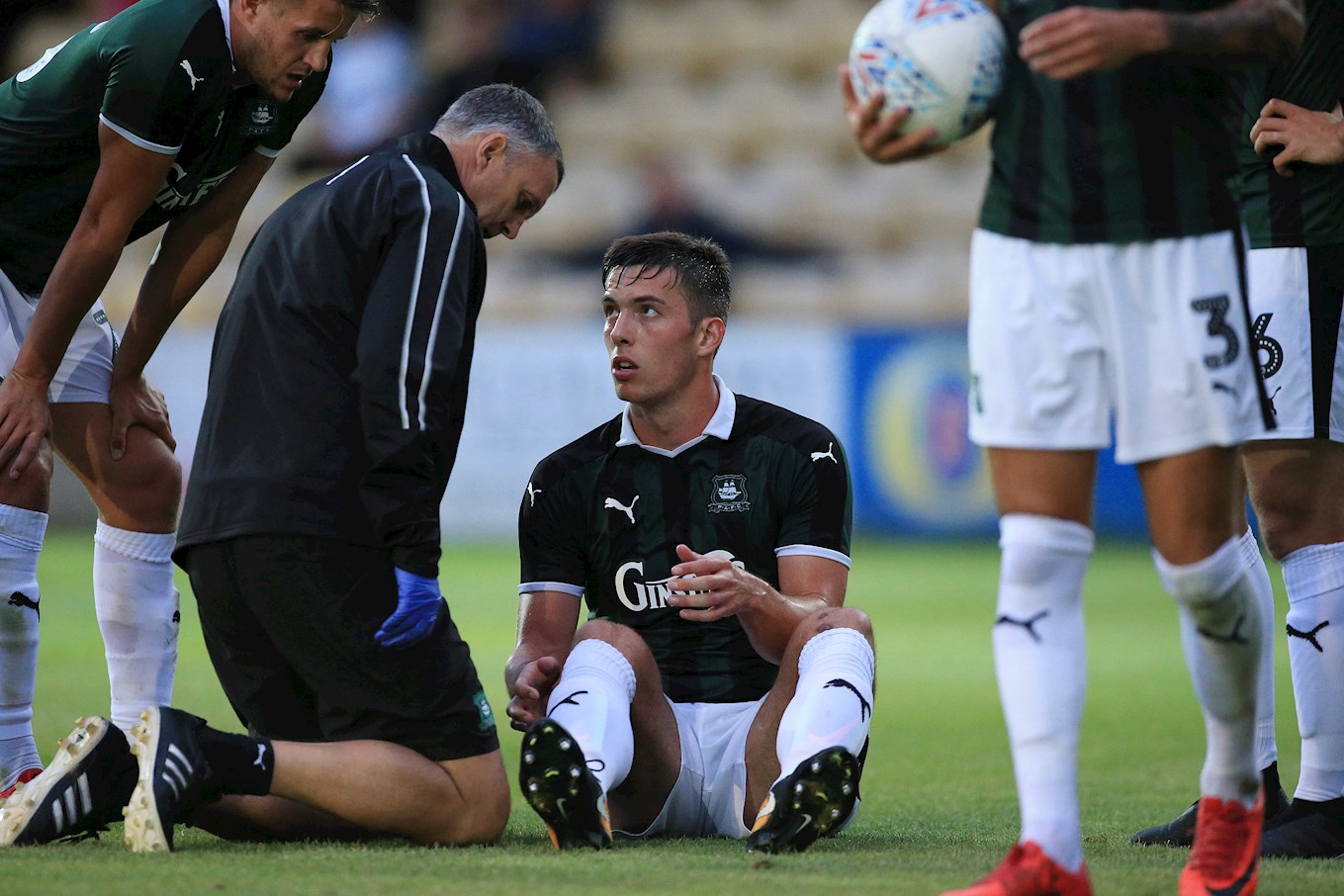 IN the second of three exclusive interviews, Argyle defender NIALL CANAVAN talks openly for the first time about living with an incurable illness

HAVING been diagnosed as having type 1 diabetes midway through last season, and assured that his son would not be similarly affected, Niall Canavan’s thoughts turned to his immediate future.

After more than 250 games for Scunthorpe United, Rochdale, Shrewsbury Town and the Republic of Ireland Under-21 side, would the 28-year-old central defender’s career be prematurely curtailed by his body’s inability to produce insulin?

Fate is a capricious mistress and, having dealt the Yorkshireman a blow, it delivered him a helping hand in the shape of a fellow sporting sufferer.

He said: “A lot of the people within this sector in the South West are very heavily aware of Henry Slade at Exeter Chiefs and, thankfully for me, one of the consultants I spoke to has worked quite closely with him.

“So, he was able to sort of reassure me on that level ‘You can still play – there’s no worries about that.

“They didn’t understand how I’d been playing with my sugars as high as they have been for however long I may have had it. Most people who have their sugars at that level can’t operate, never mind live a full professional sportsman lifestyle.

“They were able to spin it quickly for me in the sense that ‘It’s going to take some time to get used to and you’ll learn as you go along, but the best thing we can tell you is that you’ve been doing it and you’ve been playing well by all accounts while being ill, so, if we can sort this out, it only says good things for you.

“'You’ll feel better, you’ll be able to give more physically; there’s only upsides for you, given that this hasn’t stopped you yet.'

“That all I needed to hear at the time and I just tried to take it in my stride as best I could.”

He said: “Things had just started to turn for us, so that helped a little bit. It was just something else to cope with. I wasn’t aware of it before and then, all of a sudden, I can check my blood sugar and, if it’s really high, I know why I don’t feel right.

“The hard thing that the medics were trying to get across to me was that there isn’t one fix for everyone and I was going to have to play it by ear. There would be times when I won’t have a clue what’s happening, the blood sugar levels will change and I’ll feel different without really understanding.

“The staff at Derriford Hospital have been really good. If ever I’ve needed anything, they’ve been on the end of the ’phone, or I can email them and they can get straight back to me whenever I have any questions, which I have at certain times.”

Those questions have revolved around supplying his body, initially through injections, with the insulin that it is incapable of manufacturing itself, without which Niall will suffer serious harm. At the other end of the scale, too much insulin can lead to hypoglycaemia that, if ignored, can be fatal.

“Last summer was my chance to sit down and properly look at things,” said Niall. “I was very slowly increasing insulin at the start, because I don’t want to send me the other way and end up in a coma. It’s been very much trial and error and trying things, and I’ve got it wrong at different times.

“Training is the best time to try and figure stuff out, but it was hard, at times, because I’d gone from being in a state where I’d had a lot of sugar in my body and I couldn’t use it so I was passing between 800-1,400 hundred calories a day.

“So I had a real craving for sugar all the time: the famine amongst the feast – your body has got everything there it needs to use but can’t use it, so it cries out for more and just makes the problem worse.

“I’d gone from having a very, very sweet tooth to suddenly not really being bothered at all. You’ll see me carrying around sweets or something and it’s not because I’m craving sweets, it’s because if I need them, I can take them, and it keeps me going.”

Dealing with diabetes off the field is one thing; on it is an altogether different test.

“Games were a challenge – I am not going to lie,” he said. “We found out very quickly that adrenaline blocks the ability to use the insulin you’ve got.

“I remember the first game that I played after I’d been injecting. I came off after 80 minutes because I was absolutely spent, and I started cramping. I remember that the other side put a ball down the channel and I’d seen it out of play. Kyle [Letheren] was in goal and I turned and looked at him and he said ‘Are you alright?’ and I said ‘Not really, no – I don’t think I’ve got anything left’.

“I came off and my blood sugar level was 30, which is incredibly high – for optimum performance, you want to be between 5-8. By the time I got home an hour later, my level had dropped to 8. I went on the phone to my old man for 10-15 minutes, like I always do, and I checked it again –  now 4.

“I started getting the cramping feelings. I had this big build-up of getting everything right for the game and then, as soon as I’d be finished, everything wore off and my body started spasming because it couldn’t cope.

Finding out how to deal with the madness was now the challenge.

Next: “As soon as you get any sort of complacency, it’s the sort of thing that can really bite you in the backside.”