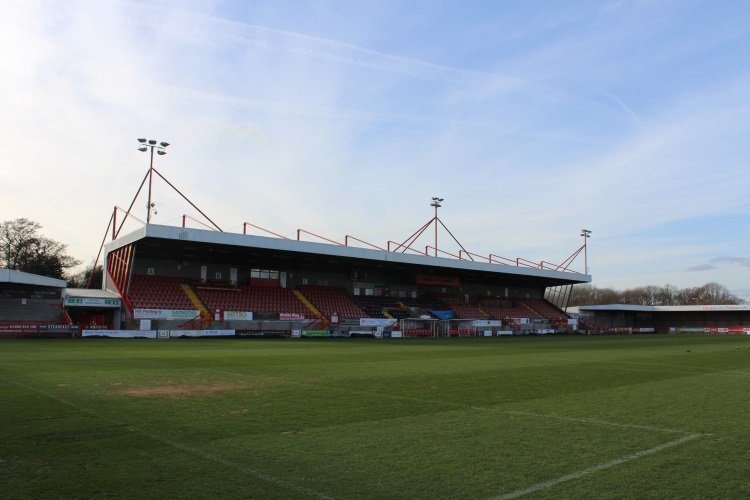 THE fans at the Broadfield Stadium in Crawley like to drape a banner on the perimeter fence at the front of the home stand bearing the self-effacing legend “Tinpot But Proud”.

A quick vox pop among the Crawley faithful before the match with Argyle on Tuesday evening failed to find anyone who believed that the Red Devils (no, not that lot) were destined for anything better than mid-table. One lady felt that manager Gabriele Cioffi (or Mr Coffee, as she rather endearingly called him) had given the team a bit more self-belief, but even she was not prepared to target anything as lofty as a top-seven finish.

Such modest ambitions are perhaps not surprising, given that Crawley are embarking on only their ninth season in the EFL, having won promotion from the Conference as champions in 2010-11 under manager Steve Evans (yes, that one). Remarkably for a self-styled tinpot club, three of those seasons were spent in the third tier, following promotion at the first attempt in 2011-12.

In recent years, though, they have made few waves, failing to finish higher than 14th since their relegation to the fourth tier in 2014-15.

The fact is, though, that the home side ended the evening in the play-off places, following the late penalty that denied Argyle what would have been a well-deserved victory.

If Crawley’s presence among the early pace-setters comes as a surprise to even their own supporters, the company that they are keeping at the top end of the fledgling table is of similar ilk.

Cheltenham and Forest Green, with their average home attendance at or below the 3000 mark, are not many people’s idea of big clubs, but they sit in the top five, while pace-setters Exeter and Crewe are currently only the 9th and 10th best supported teams in the division.

Of the so-called big hitters who were expected to challenge for the title, only Swindon Town currently occupy a play-off spot. Bradford City sit in 9th, Argyle in 12th, big-spending Salford City in 16th and Scunthorpe, who reached the League 1 play-offs just 16 months ago, have only one team below them in the entire league.

While it’s rather premature to be drawing any conclusions, still less to be talking about a changing of the guard, the early skirmishes of the 2019-20 season have shown that nothing can be taken for granted.

Ryan Lowe, the last man ever to take anything for granted, given his experiences at Bury last term, has often spoken of the size of Argyle, and of the expectations that come with that stature. But he knows as well as anyone that no-one has a divine right to win matches just because they are supposedly a big fish in a little pond.

He has spoken, too, of the extra pressure he places on his captains and best players, because they are the ones that he sees as being pivotal to the team’s success.

No-one is more aware of that than club captain, Gary Sawyer, who had not featured in the starting line-up since being hooked at half-time in the 3-1 defeat at Northampton. His return to the colours at Crawley meant that he regained the armband that had been worn in the interim by Joe Edwards, who in turn spoke of the extra limelight that had come with wearing that small but significant piece of elastic on his sleeve.

Not that Edwards suffered in any way by giving it up, as he became the third Argyle player this season to score twice in a match, following the example of Callum McFadzean and Ryan Taylor.

But what was very noticeable when the final whistle sounded, after a late penalty had nullified Edwards’ brace, was the reaction of the two sides.

The home fans and players looked for all the world as though they had won the match, while all in green had the dejected look that normally accompanies a defeat.

It could be that the difference in emotion simply resulted from the sequence of the goals, since nothing boosts the spirits like a late leveller (other than a late winner), and nothing is as deflating as conceding in the final few minutes of a match that is there for the taking.

It could also be that Crawley knew that on another day they would have been well beaten, had it not been for an outstanding display from goalkeeper Glenn Morris.

Size isn’t everything, as the saying goes, but Argyle will carry with them the tag of ‘big boys’ wherever they go this season, and there are plenty of other teams just as proud as Crawley who are going to make life hard for them.

Even if no-one else likes to call themselves tinpot.