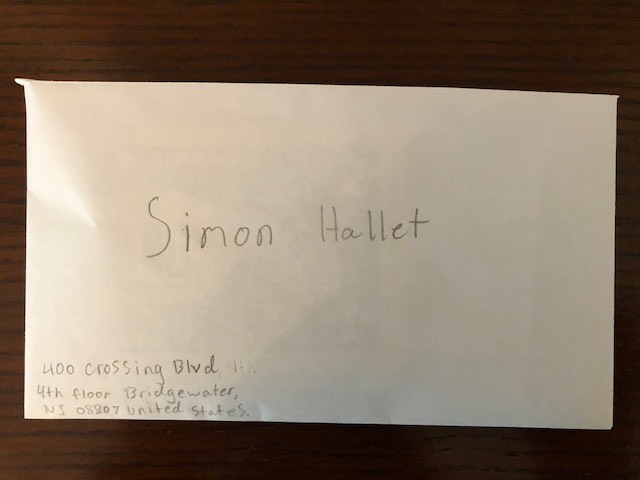 That open letter resonated with many of us – but none more so than 10-year-old Kasra Sherrell, a resident of New York and an avid Argyle fan.

Kasra, a mascot for the Pilgrims’ Carabao Cup first round victory over Leyton Orient on his last visit to Home Park, read Simon’s article on the club website, and immediately felt compelled to act.

Cobbling together his pocket money, alongside a £10 note he received from his uncle on his last visit to the UK, Kasra compiled a letter to our club Chairman, resourcefully finding the postal address of Simon’s New Jersey office, before leaving it on his father’s bedside table ready for sending.

I read the note that you wrote on Thursday, April 23, 2020. I read that the club is going to have some financial difficulties. I wondered if I could help. I hope this does the club some good. I hope that we all come through this crisis very soon, I can’t wait for the Green Army to set sail once again.

Hope you and your family are well.

“I read and appreciated the ‘Note from the Chairman’ on the PAFC website, and shared it with my wife and three children, who I knew would be interested,” said Kasra’s father, Matt.

“Two hours later I found a letter on my bedside table, ready for posting, together with an envelope containing his pocket money.  He had obviously raided his piggy bank!

“I believe he got Simon’s address from looking him up on the internet and using his company’s website. Kas had read about football clubs potentially having financial difficulties, and wanted to help Argyle out during its hour of need.”

The Sherrell family have roots in Tavistock, and have been Argyle supporters for generations. As a child, Matt played football with Pilgrim legend Mickey Evans. Since emigrating to the States, they are now part of a growing group of US-based Argyle supporters, and have attended a few events in the company of Simon and Jane Hallett to stream the Greens’ fixtures via iFollow.

Matt said: “The US supporters’ meetings are lively events, with plenty of passion from the fans.  A cooked English breakfast is always served to remind us of home, alas, no pasties though!”

“The attendees tend to range from lifelong Argyle fans who now live on the US East Coast (and their families), or friends and acquaintances who are interested to see what all the fuss is about.

“As many supporters as possible wear the Argyle colours and we try to ensure there is a match atmosphere.  This being Argyle, it’s always a roller coaster ride during the course of the match.  I love the way these gatherings bring together fans from all walks of life, united by their passion for the Pilgrims, and that passion definitely comes from the top, with Simon and Jane at the centre of every moment of celebration or disappointment. Indeed, Jane sometimes gets so nervous watching Argyle that she has to leave the room!”

Despite having to contend with a number of sporting giants on the US’ East Coast, the Pilgrims are still Kasra’s first love, and he wears his Argyle kit with pride.

Matt said: “We have lived away from the UK for many years - in Hong Kong and New York - but Kasra follows Argyle’s fortunes from afar, and we always watch match highlights.  He gets lots of questions from his school friends in America when he wears the Green Army kit!

“Kasra and his two sisters have been to watch the Pilgrims twice as we visit the Westcountry every summer, but sometimes the dates of games don’t align with our trip.”

The generosity of spirit shown by young Kasra has been replicated by supporters the world over, with our Crowdfunder campaign reaching its target of £50,000 with four days left to run.

The club extends its heartfelt thanks to the Green Army, epitomised by people like Kasra, for their support.