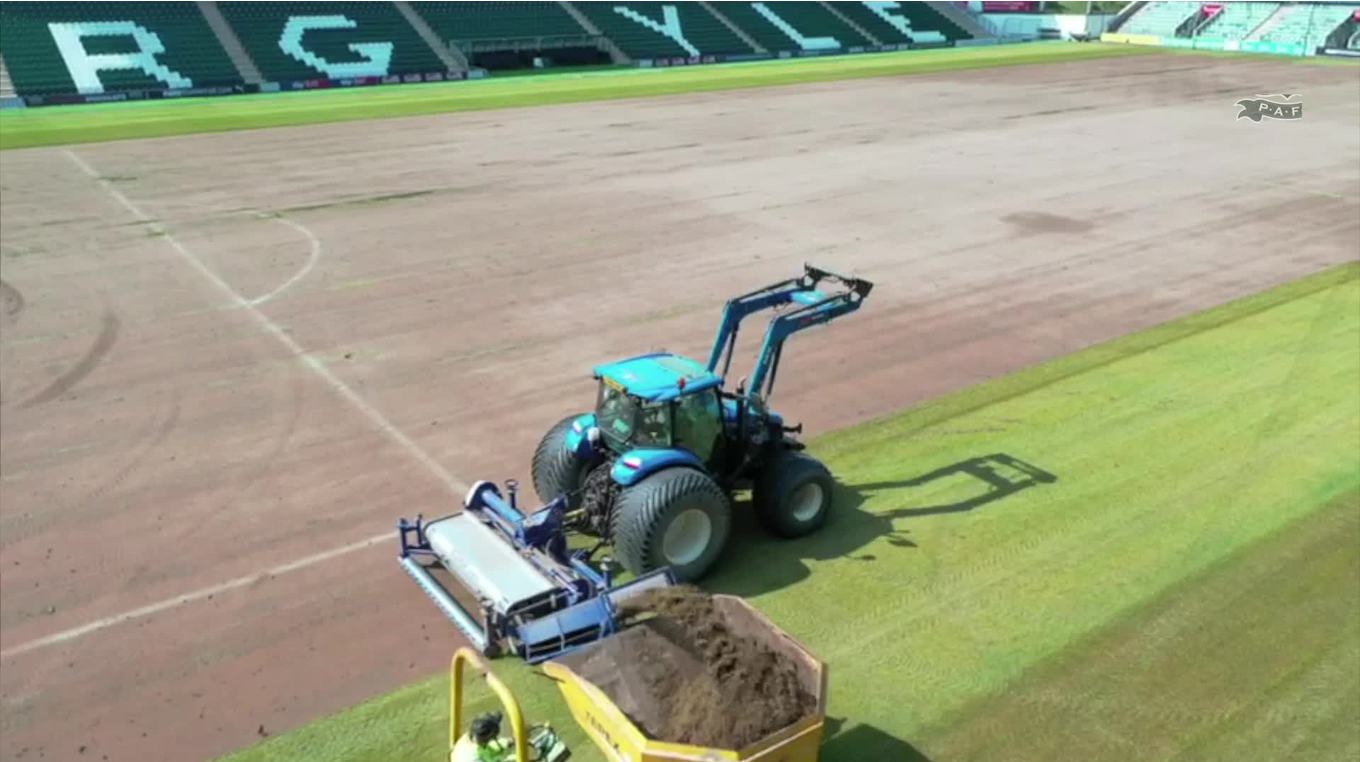 With football at Home Park suspended indefinitely due to the coronavirus pandemic, Argyle’s grounds staff have seized the opportunity to undertake essential maintenance of the playing surface.

The team, led by Grounds Manager Chris Ralph, began a renovation of the pitch over the weekend – not only ensuring that it is in the best possible condition for the remaining four games of the Pilgrims’ 2019/20 Sky Bet League Two campaign, but also for the season following.

‘Ralphy’, as he is affectionately known by his colleagues, said: “It is a similar renovation to what we usually do at the end of a season, although it is slightly less ambitious – so we can turn it around quicker. The pitch refurbishment needs to be ready to go if the season resumes in the short-term.”

With no decision yet made on a timeline for next season, the club agreed, in consultation with the grounds staff, that it would be prudent to undertake a mini renovation to the Home Park pitch during this enforced break – offering the most cost-effective solution to pitch care, while also providing flexibility to combat an uncertain schedule.

“As a grounds team, we are not sure how long we are going to have between the end of this season and the start of next, so the decision was taken to bring the refurb forward into this window,” said Chris.

“With the four games that we have left to play here, the pitch should still look brand new by the end of the season. Very minimal damage should occur in those games – so the bulk of the work will already be done ahead of next season.”

The process, as evidenced by the drone footage above, involves complete removal of the top surface, allowing Ralphy and his colleagues to tend to the drainage underneath, before laying seed for a fresh pitch to grow.

“We’re doing an intensive renovation – all the old grass, weeds, black layer on the surface – that’s all been stripped out. Fresh sand and material have been brought in. We’ll top dress it and over seed it. We have growth sheets to ensure that we will make the deadline for season resumption.”

“Everything we put in place was to make sure that we were ready for matches in the stadium at the beginning of June. The same with the training pitches, all the work we have done there is to ensure that they are ready for whenever the players return.”

“We have added germination sheets, which is something we don’t usually use. The process to relay a pitch usually takes about six weeks – but, because we have the sheets, we are able to speed that up.”