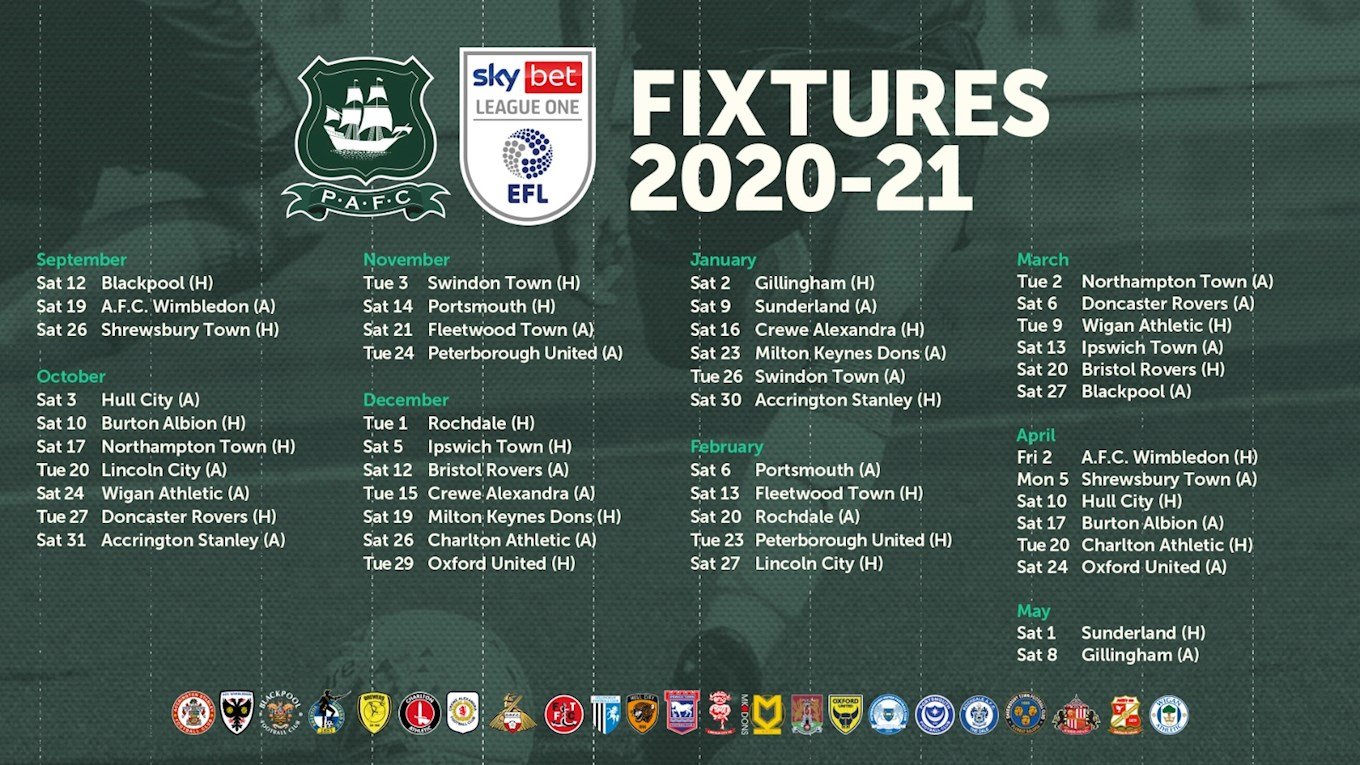 Argyle will begin their 20/21 Sky Bet League One campaign at home to Blackpool on Saturday, 12 September.

The Greens’ opening away league fixture follows seven days later, when we make the trip to face AFC Wimbledon on 19 September – although the venue is not yet confirmed, with the Dons finalising developments on their new Plough Lane stadium.

September’s league action is rounded off by a clash with Shrewsbury Town at Home Park on 26 September, while the second, third, and fourth rounds of the Carabao Cup are scheduled to run midweek throughout September – alongside the opening fixture round of this season’s EFL Trophy, which will occur on either Tuesday 8, or Wednesday 9, September.

The first round of the Emirates FA Cup will occur on the weekend of 7 November, sandwiched between two tasty home encounters against Swindon Town (Tuesday, 3 November) and dockyard rivals Portsmouth (Saturday, 14 November), before trips to Fleetwood Town (Saturday, 21 November) and Peterborough United (Tuesday, 24 November) lead us into December.

Argyle begin the final month of 2020 with two home fixtures – against Rochdale (Tuesday, 1 December) and Ipswich Town (Saturday, 5 December), before trips to face Bristol Rovers and Crewe Alexandra a week later. We host Milton Keynes Dons on Saturday, 19 December, a week before our Boxing Day fixture at Charlton Athletic.

Our final game of 2020 pits us against last season’s defeated play-off finalists Oxford United at Home Park (Tuesday, 29 December), before kicking-off the new year with a home tie against Gillingham on Saturday, 2 January.

On Emirates FA Cup third-round weekend (Saturday, 9 January), the Greens make their longest trip of the season to face Sunderland at the Stadium of Light, before hosting Crewe Alexandra a week later.  Trips to Milton Keynes Dons and Swindon Town follow, before we host Accrington Stanley on Saturday, 30 January.

February begins with a trip to Fratton Park to face Portsmouth, before hosting Fleetwood Town a week later. After heading to Rochdale in midweek, the month ends with back-to-back home ties against Peterborough United and Lincoln City.

On Tuesday, 2 March, Argyle travel to Northampton Town, and is followed by a trip to Yorkshire to face Doncaster Rovers a few days later. A midweek home tie against relegated Wigan Athletic comes in quick succession, and a busy period of four games in eleven days concludes with an away fixture against Ipswich Town. On Saturday, 20 March, the Greens host Westcountry opposition in Bristol Rovers, before travelling to Blackpool seven days later.

The Greens conclude their league campaign at home with a mouthwatering tie against Sunderland on Saturday, 1 May, before heading to Kent to face Gillingham on the final day of the season (8 May).

Please note: These fixtures are in draft stage, and further amendments may be made by the EFL in the coming days.