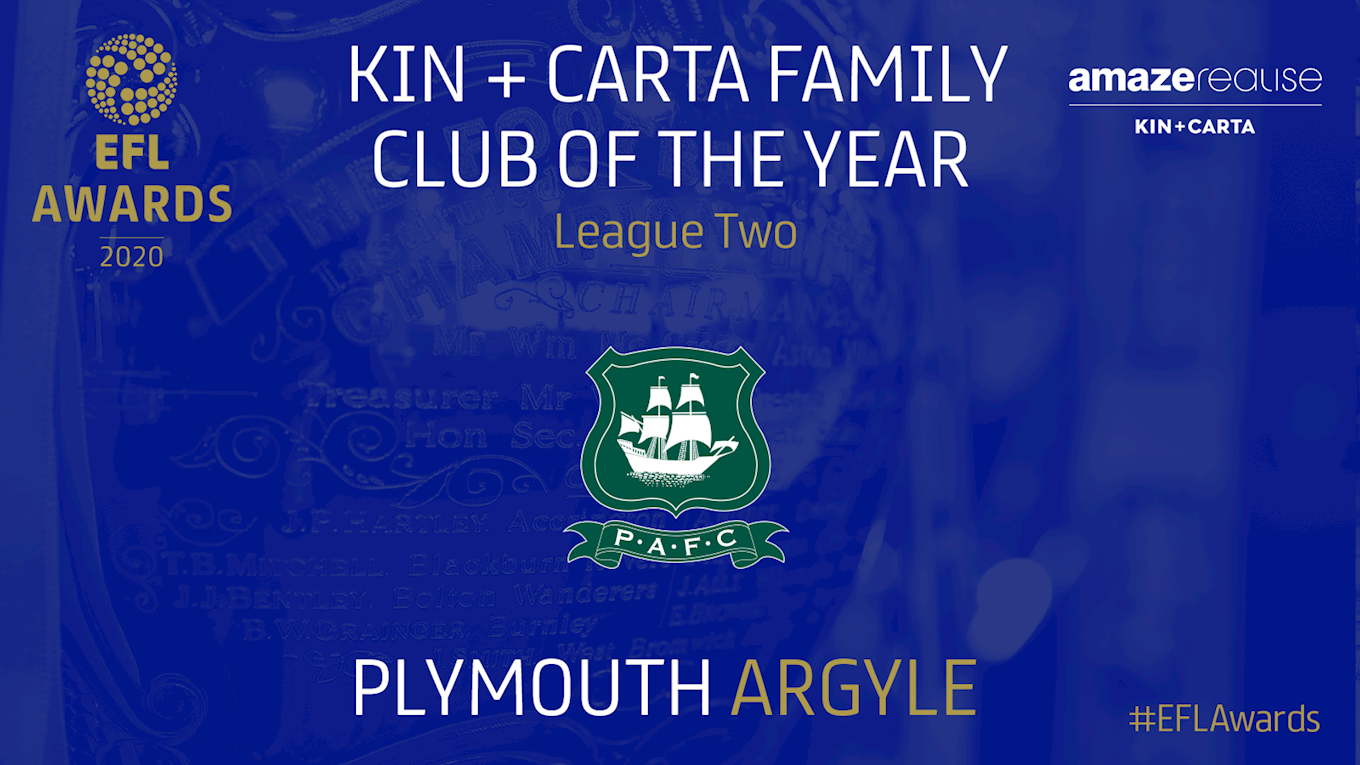 EFL Family Club of the Year

We are proud to announce that Argyle have been named as the EFL’s Kin + Carta Connect Family Club of the Year for Sky Bet League Two (2019/20).

With the annual EFL Awards ceremony for 19/20 suspended due to COVID, the Pilgrims share the prestigious honour with fellow divisional winners Luton Town (Championship) and Peterborough United (League One).

The club has invested heavily in the supporter experience in recent years, with a particular focus placed on families. Innovations, including the Family Fan Zone, which offers entertainment, music, activities and games at Home Park before kick-off, and the Family Stand – which provides further entertainment inside the stadium - have proven to be hugely successful with home and away supporters alike.

Argyle chief executive officer, Andrew Parkinson, said: “We are delighted to have been awarded the Kin + Carta Connect Family Club of the Year award this season.

“In line with our club Vision and Values, we have placed significant focus on improving the match-day experience for supporters, particularly those with families. We are proud to have received such an honour, and will continue to work hard at providing the best possible match-day experience at Argyle.”

Simon Hallett, Argyle chairman, said: "I am delighted that our long-term efforts to improve the quality of the experience at Home Park for families has been recognized in our being awarded the Family Club of the Year award for League Two. I thank everyone for their contribution to this award.

An EFL spokesperson said: “Congratulations to the three winning Clubs, they all hugely impressed the judging team with the standard of their entries and their engagement with families in and around matchdays. Each demonstrated a clear, strategic and impactful approach to attracting and engaging young fans and families to deliver a first class family experience in their respective division.”

The Family Club of the Year award is not the only honour associated with Argyle this time around, with outgoing forward Joel Grant also winning the PFA Players in the Community award for the fourth tier.

Sky Bet League One Player of the Season

LFE Apprentice of the Year – Championship

LFE Apprentice of the Year - League One

Mitre Goal of the Season

Screwfix Moment of the Season

PFA Players in the Community (announced in March 2020)

YouGov Sport Community Project of the Year (announced in March 2020)