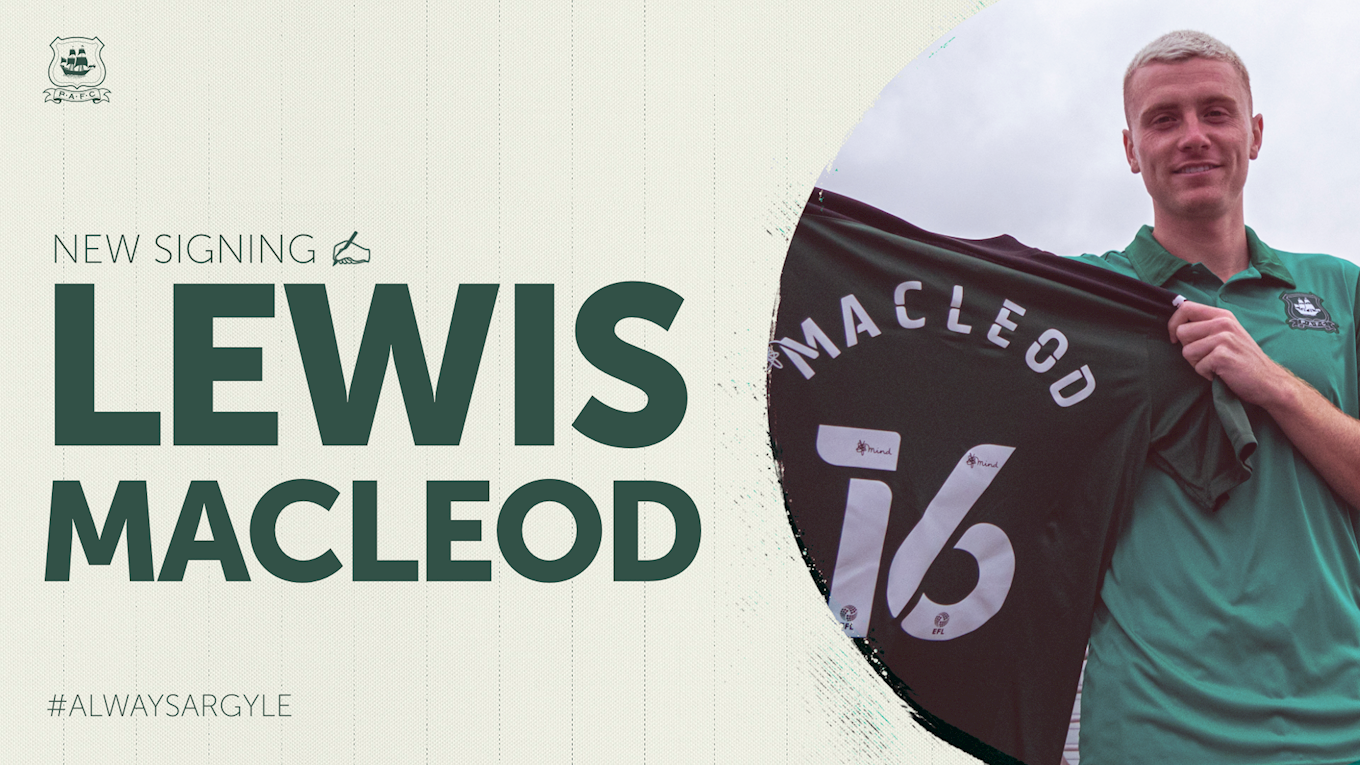 Argyle manager Ryan Lowe has bolstered his midfield options with the signing of former Rangers and Scotland under-21 international Lewis Macleod.

The former Gers prodigy, 26, joins the club as a free agent, and met up with his new teammates on their pre-season training camp in Scotland before signing on to become the Pilgrims' fifth signing of the summer.

Adept in the holding role and in more advanced positions, Macleod left Sky Bet Championship side Wigan Athletic in the summer, but he is perhaps best known for his spell at Ibrox, where he was an influential member of the team which rose back through the Scottish leagues post financial crisis, earning him a move to Brentford for a reported seven-figure fee in 2015.

Macleod began his association with Rangers at ten years of age, and impressed through the age groups, for both club and country, before signing pro terms in 2012.

Macleod’s form for the youth and reserve sides secured a first-team opportunity in his first pro season, which he snatched with both hands. Lewis nailed down a regular position in the heart of midfield and was swiftly rewarded with a five-year deal early in a campaign which culminated in the Third Division title for his team, and the Young Player of the Year award for himself.

Lewis’ form continued at a higher level, and he began life with Rangers in Scottish League One by scoring four goals in seven appearances, including a spectacular overhead kick in a 2-0 victory over Ayr United in October 2013, before a peculiar viral infection kept him sidelined as the club raced to back-to-back promotions and into the Scottish Championship.

Macleod marked his return to full health in style, beginning the season in Scotland’s second tier with four goals in his opening four games, and that purple patch was extended to see him win Scotland’s Young Player of the Month award for October – a month in which he netted a stunning bicycle kick that would go on to win the Rangers' Goal of the Season award, as well as a first call-up to Scotland’s senior squad.

A couple of months later, Macleod moved south of the border to join the Bees, but an injury sustained towards the tail-end of his time at Rangers delayed a competitive debut for the west London club until the following season.

After a stop-start four years at Griffin Park, Macleod moved on to fellow Championship side Wigan Athletic for the 2019-20 campaign, where he made 12 appearances.

Lewis will wear the no.16 shirt ahead of the Greens’ 20/21 Sky Bet League One campaign.

Lewis' home and away shirts for the upcoming campaign are available for sponsorship.