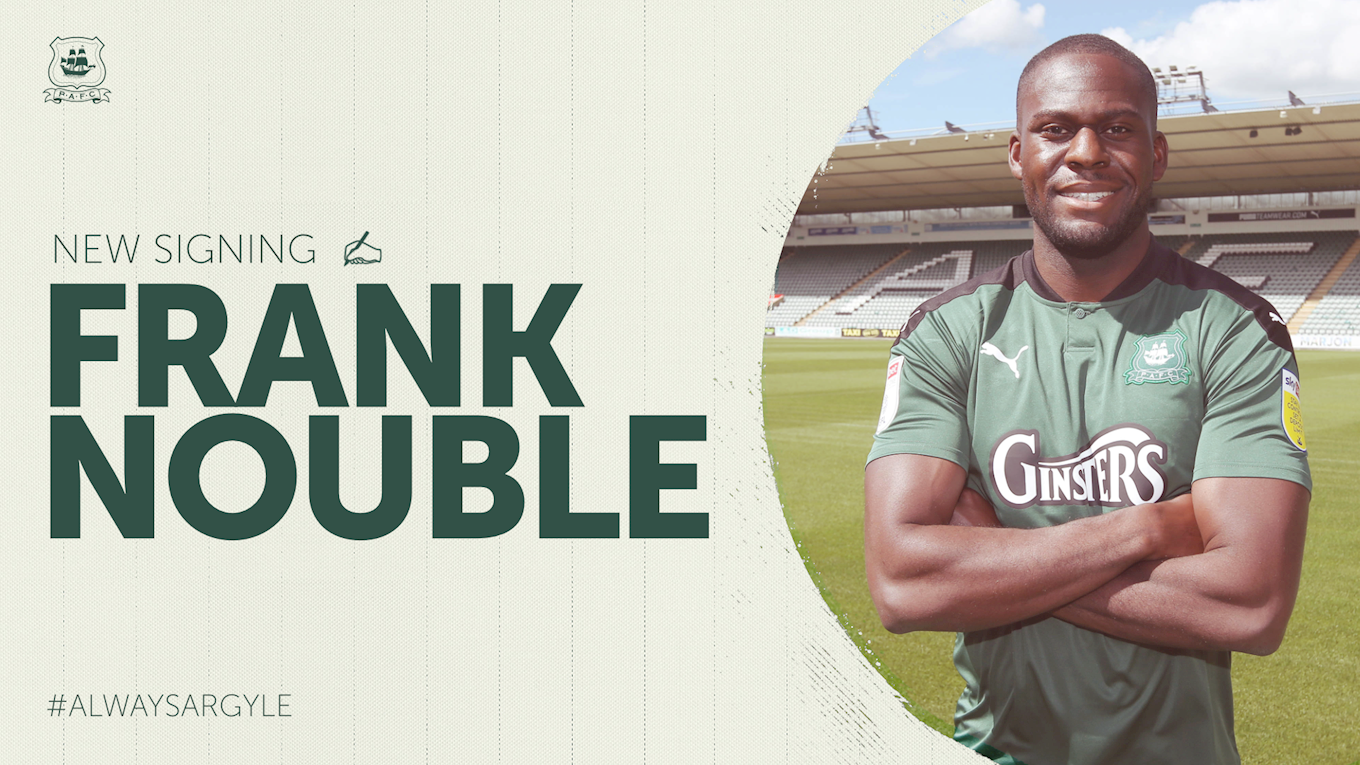 Nouble, 28, joins the Pilgrims after the expiry of his contract at Sky Bet League Two side Colchester United, where he contributed five goals and six assists in 38 appearances as the U’s fell short in the play-offs.

A powerful centre-forward who is also adept out wide, Lewisham-born Nouble began his youth career at Chelsea’s Academy, before moving across London to join West Ham United on a long-term professional deal in 2009. Showing significant promise at Upton Park, Frank made ten appearances for the Hammers in his first season, including eight in the Premier League.

Already an England international at under-17 level, Nouble was called up to the England under-19 squad during his impressive opening season with West Ham, and he went on to score twice for the Young Lions in the 3-2 victory over Austria in the UEFA under-19 Championship in the summer of 2010.

His debut professional campaign included loan spells at West Bromwich Albion in the Championship and Swindon Town in League One. In his sophomore season, Nouble extended his footballing education with loan spells at Swansea City, Barnsley, Charlton Athletic and Gillingham – where he scored five goals in 13 appearances.

In the summer of 2012, Nouble joined Wolverhampton Wanderers, but struggled for first-team opportunities at Molineux, subsequently joining fellow Championship side Ipswich Town for an undisclosed fee six months later.

Frank enjoyed much more first-team involvement at Portman Road, making over 60 appearances for the Tractor Boys, before moving on to Coventry City.

While with the Sky Blues, Frank scored a stunning solo goal against Argyle in the quarter-final of the Johnstone’s Paint Trophy, dribbling from inside his own half, past two defenders, before slamming the ball into the top-left corner of Luke McCormick’s net.

Upon leaving Coventry, Nouble joined Chinese side Tianjin Songjiang, before returning to the EFL for spells with Gillingham, Southend United, Newport County and Colchester.

Frank will wear the no.7 shirt for the upcoming 20/21 Sky Bet League One season.

Frank Nouble’s away shirt is sponsored by Argyle Away Days. His home shirt remains available for sponsorship, alongside a number of other Pilgrims for the upcoming 20/21 Sky Bet League One season.

On behalf of Argyle Away Days, Adam Ferguson said: “When we heard that the prestigious no.7 shirt was available, we were keen to secure its sponsorship.

“With a history of influential players sporting this shirt, we were excited to see who’d be next!

We’d now like to welcome Frank who adds another very strong and exciting attacking dimension to the team and one that the @ArgyleAwayDays syndicate are very proud to be associated with.”