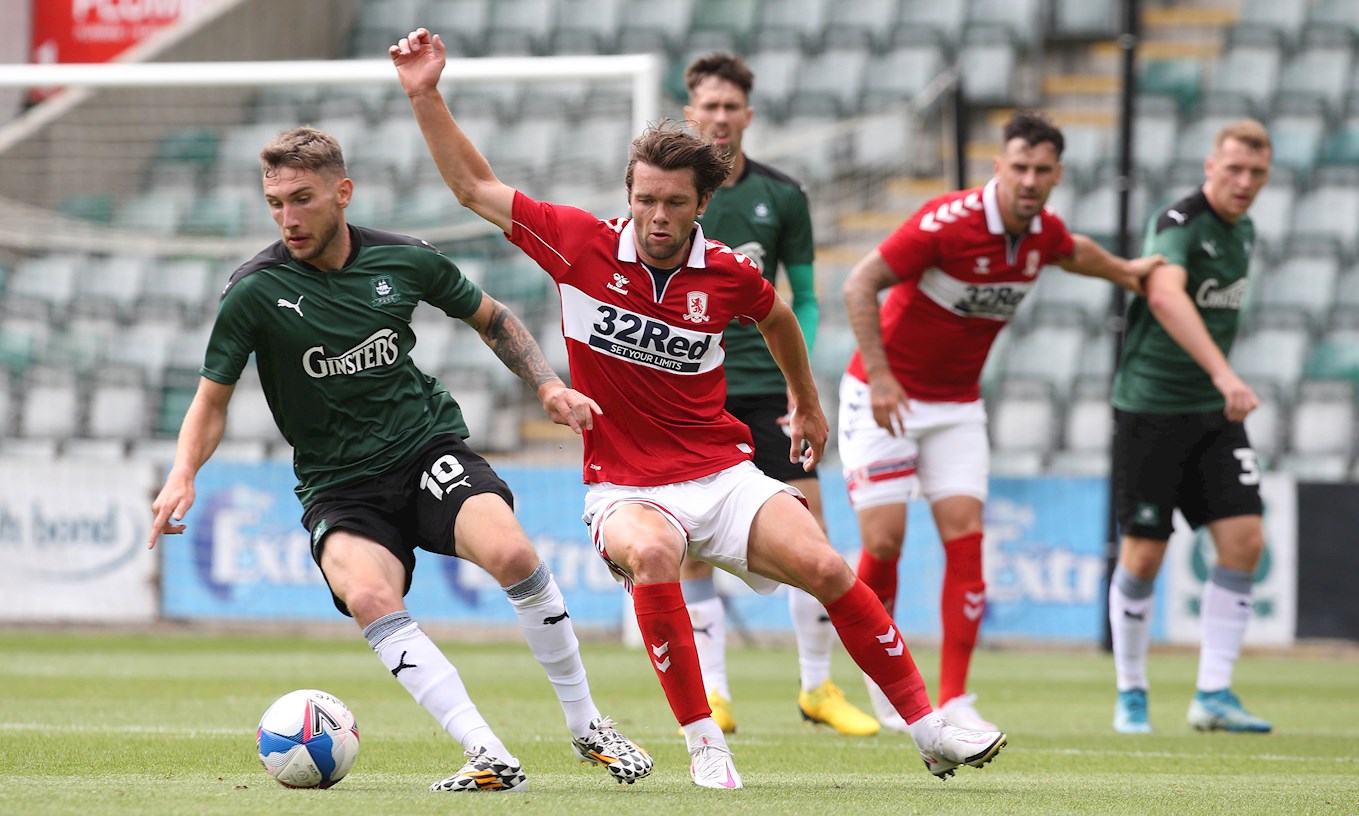 A Britt Assombalonga header proved to be the difference between Argyle and Sky Bet Championship side Middlesbrough at Home Park on Tuesday afternoon.

The Greens were more than a match for their higher-level opposition for much of the pre-season fixture, but the Congolese forward’s bullet header from a corner denied Ryan Lowe’s side a reputable draw.

Having fallen narrowly short in an impressive performance against Rangers XI last week, manager Lowe opted to freshen up his side for their third pre-season friendly of the summer against Sky Bet Championship opposition managed by Neil Warnock, a promotion-winner himself while at Argyle.

In came Ryan Hardie for his first appearance after the birth of his first child, as well as fellow Rangers academy graduate Lewis Macleod, who was making his first start in holding midfield after joining as a free agent last week. The newest introduction of all, though, came through left centre-back Kelland Watts, who joined the Greens on a season-long loan from Premier League Newcastle United a day previous. There were also starts for Will Aimson and Conor Grant, who made impactful contributions off the bench against the Gers.

Despite facing higher-level opposition, the Pilgrims committed to playing it out from the back, with goalkeeper Cooper laying goal-kicks to Scott Wootton at centre-half, before distributing further up the field. On 11 minutes, it was a back-to-front move which fashioned the Greens’ first decent opportunity.

Macleod threaded the needle with a low ball to Luke Jephcott on the edge of the area. The young striker, in line to receive his first Wales under-21 cap in a couple of weeks’ time, offloaded to trusty strike partner Hardie, who sent his marker swaying left and right before shovelling his effort wide of the near post.

The Greens continued to commit numbers forward when in possession, and a good period of link-up play between Hardie and Grant eventually fashioned a half-chance for Danny Mayor on the edge of the box.

The Pilgrims’ no.10 shrugged off his marker with deft touch before firing low at Dejan Stojanovic’s goal from 25 yards, but the ‘keeper held. On the counter, Ashley Fletcher broke the lines and advanced on Mike Cooper from a tight angle, but the Pilgrims’ stopper saved smartly with his legs.

By the first-half drinks break, the Greens were holding their own. Upon the restart, Hardie was denied a first goal back in Argyle colours by a defensive deflection that carried his snapshot inches wide of Stojanovic’s far post.

Once again, in a tie that was ebbing and flowing, Boro responded. As Argyle battled hard to clear their lines, the ball fell to Marcus Tavernier 10 yards from goal. The Boro man set himself and fired low and hard, but a brave Aimson lunge kept the clean sheet intact.

The Pilgrims’ resistance was broken just after the half-hour, from a set-piece. Having been denied a tap-in moments earlier by Joe Edwards’ timely interception, Assombalonga rose highest to clinically head home the resultant corner.

The Greens regrouped after the opener and settled back into a slick passing rhythm, but continued to be restricted, for the most part, to efforts from range. After a lovely passing move which rocked back, forward and side to side, Grant curled one over from 25 yards.

Argyle could feel a little hard done by to be a goal down at the interval, but had to be grateful for Cooper’s swift reactions that it was not two on the stroke of half-time, with the young custodian saving well as the ball dribbled through to tricky Tavernier inside the box.

The Pilgrims emerged for the second term with two personnel changes. With their first 45 minutes in the tank, Hardie and Watts made way, replaced by Frank Nouble and Gary Sawyer, respectively. The Greens’ club captain was immediate thrust into the action, putting in a crucial block as Assombalonga threatened to put the game to bed from the edge of the area.

With minutes in the legs more crucial than anything else at this stage, Lowe had rotated his entire squad, save for sole remaining substitute Klaidi Lolos, with 20 minutes to go, as the Greens looked to restore parity against a Boro outfit providing to be well-drilled and hard to break down.

At the final drinks break, Lowe urged his players to force the issue in the closing stages. A good piece of play between substitutes Panutche Camará and Nouble found Ryan Law on the edge of the area, but his lay-off to the overlapping Mayor fell inches short of the playmaker’s left boot.

With ten minutes to go, Lolos was last man off the bench, replacing Mayor in midfield. The Greens spent the final stages camped in Boro’s half, but could not find a way through their opponents’ resolute defence.

Next up, Forest Green Rovers.