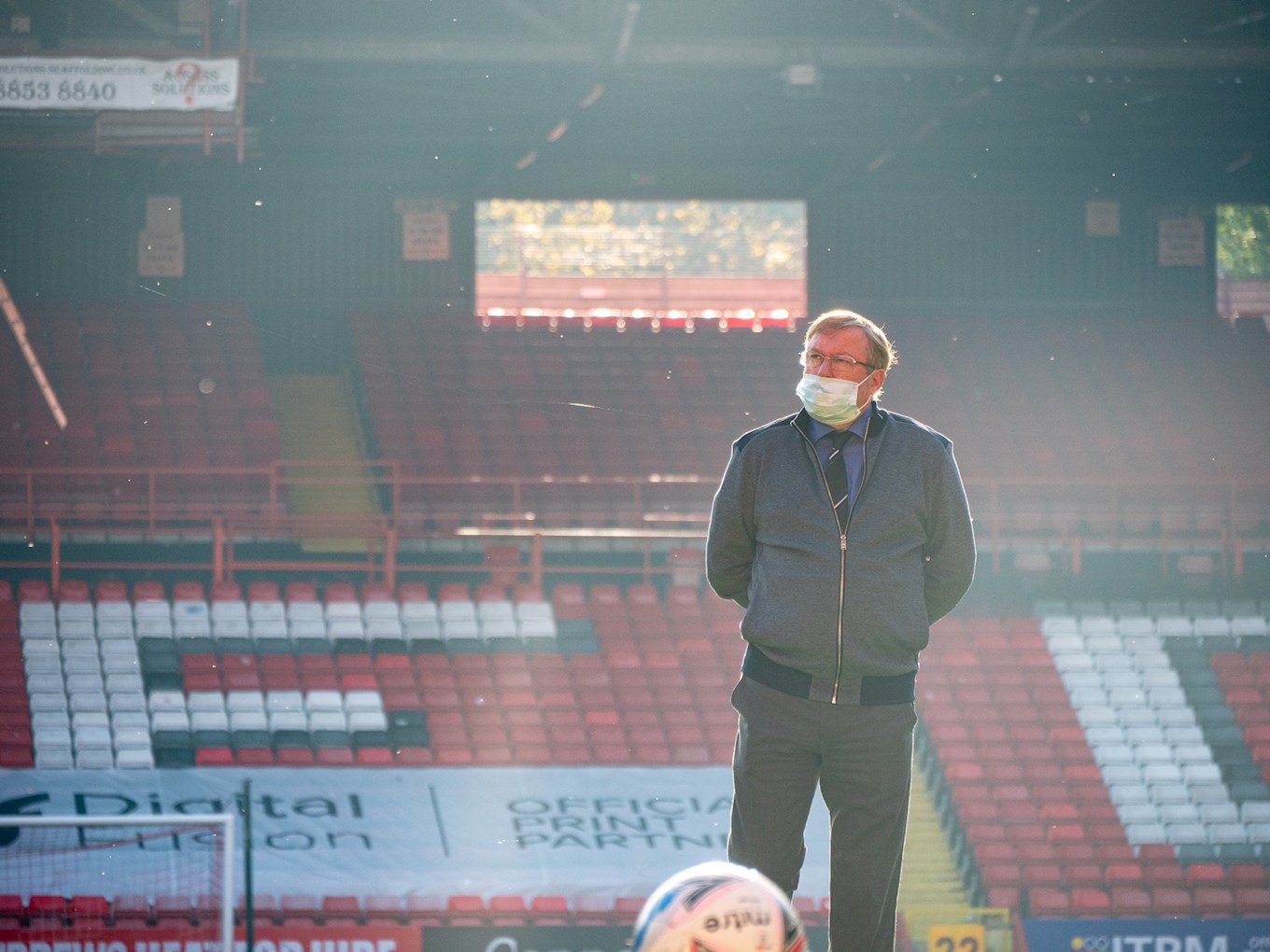 Argyle Director of Football Neil Dewsnip was appointed at Home Park last season with a mandate to guide the Pilgrims’ talented young management duo of Ryan Lowe and Steven Schumacher in their roles at Argyle.

Having initially joined the club as a consultant to the first-team coaching staff, Dewsnip was approached by the club hierarchy about a more permanent role in December of last year.

A year on from that appointment, with a promotion from Sky Bet League Two already in the bank, the former England and Everton youth coach is in no doubt that he made the right decision in answering the Pilgrims' call.

Neil said: “I had got such a strong feeling about Plymouth Argyle, in such a short period of time, that I was delighted to accept.

“One of the things that appealed to me about the football club was the Green Army. I related to them immediately. My team is Everton – at Everton if you don’t run around and try hard, the supporters let you know. I got that immediately here.

“It was that feeling that, if you try hard and give it your best go, they’ll be with you. If players or members of staff didn’t do that, then the Green Army would be right to be critical. I’m sure that, when they saw performance on Saturday against Milton Keynes Dons, they witnessed the qualities that they want to be associated with their club.

“I was also struck by the energy around the football club, on and off the field. Of course, everyone knows how much energy Ryan and Steven have as coaches, Nance [first-team coach Kevin Nancekivell] as well, but Simon [Hallett, Chairman], Andrew [Parkinson, CEO] and Zac [Newton, Club Secretary] were also major influences. You’re thinking, ‘wow, this is a good place.’

“I was conscious that the club had fallen on hard times a little bit, back in League Two, but the stadium and the pitch is to die for. I’ve been around most stadiums in my coaching time, but the playing surface here is absolutely wonderful. If I was playing out there, if I was the coach out there, I’d be thrilled. It’s a lovely environment to perform in, and long may that continue.”

Under a dynamic new management team, Argyle won promotion straight back to the third tier at the first time of asking, and a lightning start to this season in League One cranked expectations up a little higher, before a recent winless run ended with a superb victory over Milton Keynes Dons on Saturday.

It is perhaps during those difficult periods when Dewsnip’s calming influence behind the scenes is at its most valuable.

“We had a very successful season last year, a promotion – and the second promotion that Ryan and Steven have had in a row, at two different clubs. The start of the season was going quite nicely, thank you, but in recent weeks we’d hit a patch where the waters were very choppy, obviously, and we have needed to react.

“My role has been very much around supporting them [the coaching staff] – they’ve never experienced anything like this, and they’ve had to show some resilience in adversity. They’ve got fantastic support from everybody at this football club, coaching staff, office staff, playing staff – they’re all pulling in the same direction.

“We do own one or two of the performances, but seeing and being involved in the preparation ahead of the games, there is no doubt in my mind that we will continue to improve. Again, we should remember that this is a long-term objective – this is season two in a project, and it is important that we as a club, as well as our supporters, don’t lose sight of that.”

Before the Greens’ recent bad run, the team had not lost two consecutive league games in the Ryan Lowe era, as well as going 11 months (albeit with an extended off-season included) without a league defeat on home soil.

Neil said: “Ryan and Steven have had to experience something that they’ve never been through before. Expectations, I believe, are high at Argyle – and it’s possible that they’ve been too high. I’ve heard some supporters speak about back-to-back promotions.

“Don’t get me wrong, that would be lovely if it could happen, but the reality is that we’ve just been promoted – we have, pretty much, the mainstay of that team, and we’re now coming up against better teams, coaching against better coaches. The challenges are far harder.

“At times like the past few weeks, I am here to ensure that they don’t lose confidence. I believe that they have exceptional talents, but it all takes time. They are only into their third season in these roles – I could quote a million examples, but without thinking too hard, Sir Alex Ferguson got sacked in his first role at East Stirling.

“Ryan will be the first to tell you that he has lots to learn, as does Steven, and my role is to support that learning. We have a little action plan between us to work through challenges that arise – and I know that Ryan has also sought out guidance from other significant people in the game, just to take on a range of views. He knows that football is not an easy profession, it challenges every manager.”

Taking a long-term approach is an essential element of Dewsnip’s role as Director of Football, and, in his first year in the role, he has already helped to implement a number of crucial long-term projects – including an overhaul of the club’s Academy setup, as well as work on a data-led recruitment model.

He said: “Clubs that have Directors of Football, their roles are around the mid to long-term view. To develop a football club takes time – it took Liverpool 30 years to regain their status, and it will take a period of time to get to where we want to be. Simon’s vision is out there, to be in the Championship in five years.

“In year one, we got promoted straight away. There is that danger that expectations fly away, really. My role is to remind people that we’re making great progress, there will be bumps in the road of course, but there are a number of ongoing projects to take us towards that ambition.

“We are constantly developing our recruitment process, we’ve revamped the Academy to bring more young talent into the first-team squad, to support all of our staff, and to improve the performance side, sport science, and medical. There’s so much work to do to build this club into the Argyle we want it to be.

“This is very much a project, a learning experience for everyone at the club, and it is about putting the building blocks in place to go forwards again. We should not get ahead of ourselves when we’re on a good run, nor should we overcompensate when we hit a sticky patch.”

With long-term sustainability at the forefront of the club’s philosophy, Dewsnip is preaching patience during his second season at Home Park.

“My trust is very strong with the supporters, the football club in general, the players and the coaching staff, that’s for sure.”