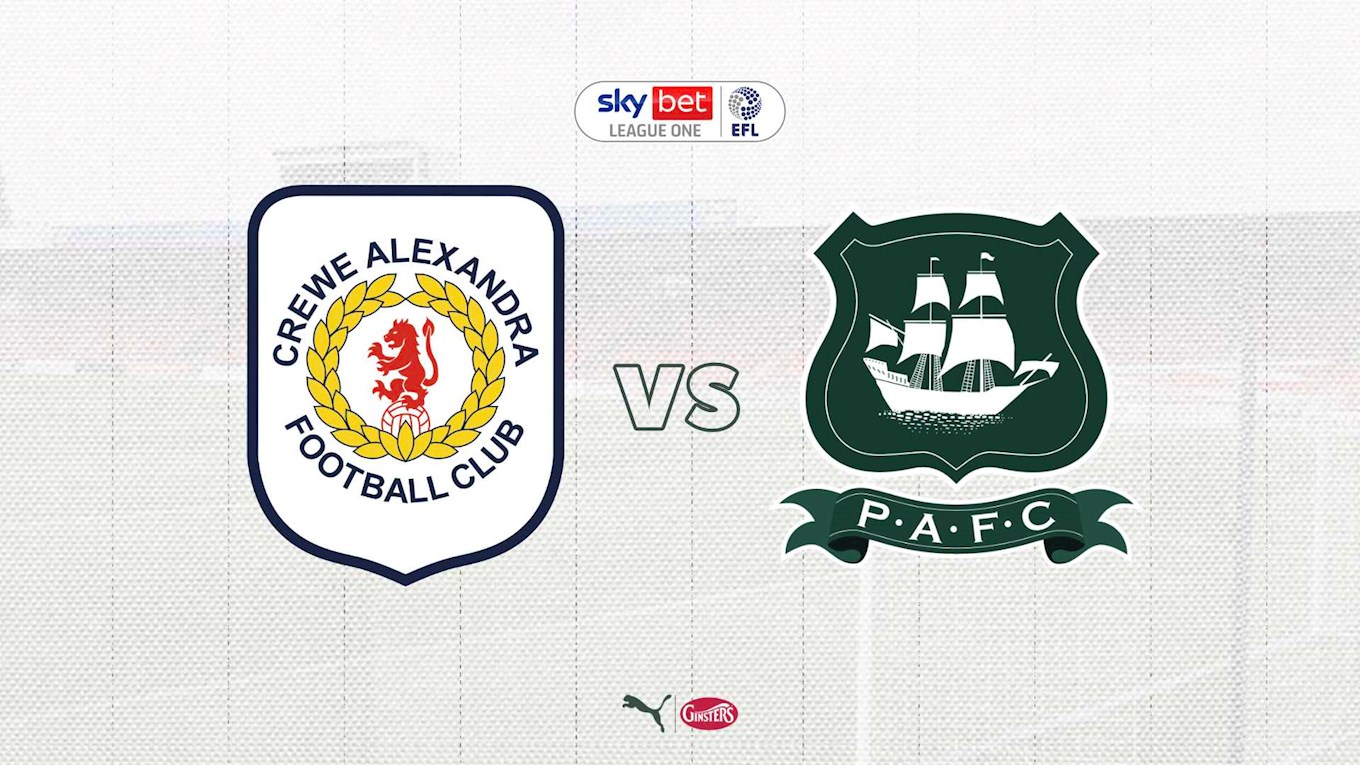 Ryan Lowe’s Pilgrims travel to Crewe Alexandra on Tuesday night looking to invoke the spirit of their August 2019 visit to the Alexandra Stadium.

In last season’s curtain-raiser, the Greens marked the beginning of the Ryan Lowe era with a superb 3-0 win over the Alex, who were promoted from Sky Bet League Two alongside Argyle and Swindon Town.

The Pilgrims began life in League One in excellent form, but a recent dip leaves them in 16th place after 16 fixtures. Meanwhile, Tuesday’s opponents, David Artell’s Alex, have climbed to 11th in the table, having won two of their last three league games.

Crewe marked the return of their fans for the first time this season with a come-from-behind victory over Northampton Town on the weekend – snatching the three points with a 94th-minute Ryan Wintle winner.

The hosts got off to the worst possible start, falling behind to Ricky Homes’ third-minute opener, but a goal early in the second period from Owen Dale drew Alex level. Joe Martin’s 69th-minute red card for the Cobblers made matters tougher, and they eventually caved in the dying moments.

The Alex are no strangers to late goals, or coming from behind. In their previous fixture, Owen Dale’s 88th-minute equaliser snatched a point on the road at Burton Albion. Before that, Artell’s men overcame a two-goal deficit to beat Swindon Town 4-2 at the Alexandra Stadium.

The Railwaymen continue to be without captain Perry Ng, who is currently serving a six-match suspension, so Harry Pickering, who netted in the Greens’ 2-1 victory over Crewe at Home Park in February, is expected to continue as captain. For the Greens, influential midfielder Danny Mayor returns to contention, having served a one-match suspension.

ARGYLE AWAY TO CREWE ALEXANDRA IN THE EFL

Billy Bingham’s men lost on their first ever visit to Gresty Road in 1969, with Dave Burnside on target for Argyle.

Left wing-back Callum McFadzean put the Pilgrims ahead after just four minutes with a spectacular bicycle kick, and former Crewe man Joel Grant doubled our advantage on 26 minutes. McFadzean wrapped up the points with his second goal of the game in the second minute of injury time, giving the Greens the perfect start to life under their new manager.

Biggest win: The 3-0 victory on our last visit to Gresty Road. This was also the first time that we had scored more than two goals at Crewe and won there by more than a single goal in the league.

Simon Walton and Matt Lecointe were our scorers, while Conor Hourihane was sent off in injury time at the end of the match. Current Crewe manager David Artell and our own Byron Moore played for the home side, while future Pilgrim Jamie Lowry came on as a sub for the Alex. Another future Argyle player, Kelvin Mellor, was an unused substitute for the Railwaymen.

A reminder, the fixture at the Alexandra Stadium kicks off at 7pm on Tuesday, and is available to stream live, worldwide, on iFollow Argyle. Click here to purchase your pass.