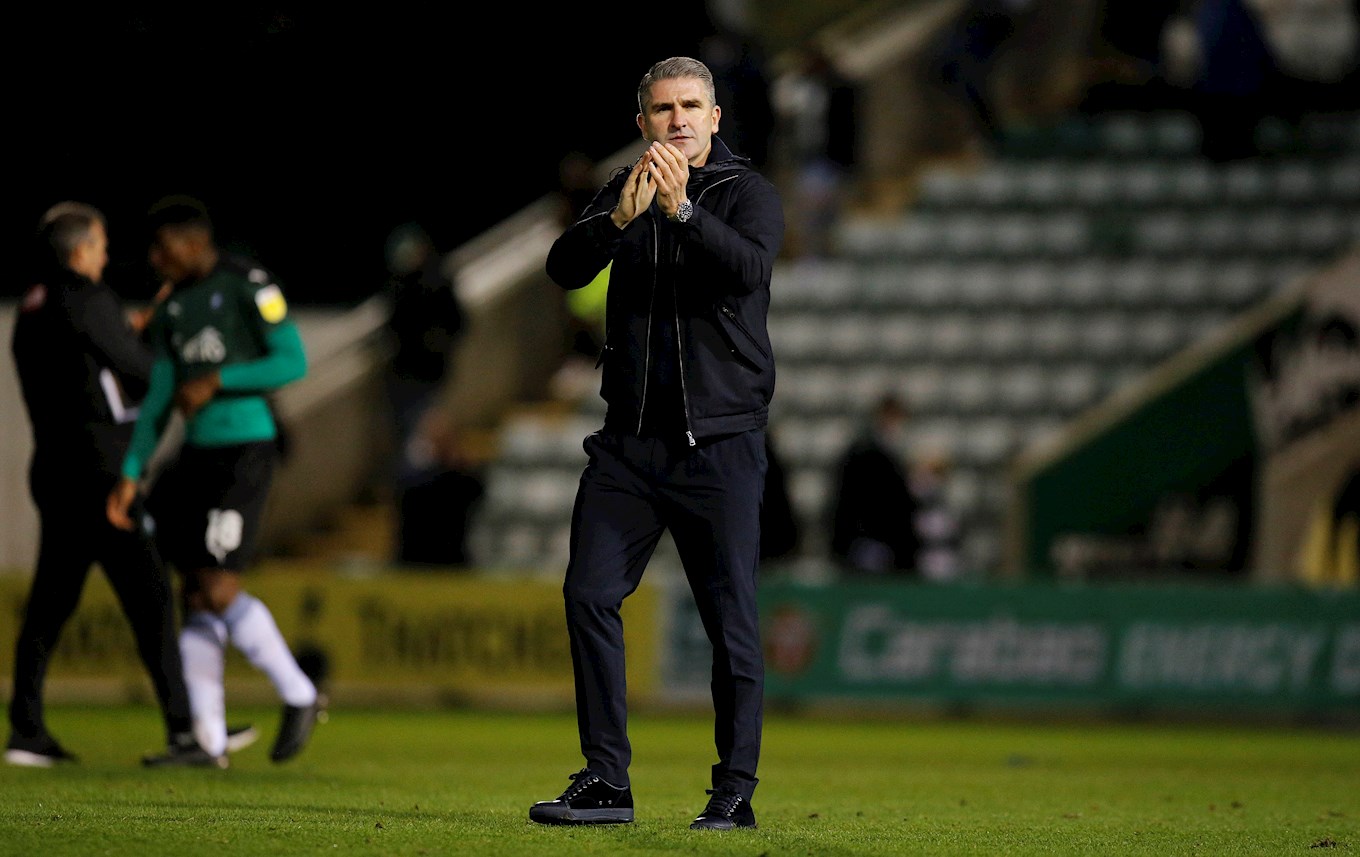 Argyle manager Ryan Lowe felt that his side paid the price for conceding too cheaply in the 3-2 defeat to Oxford United in Sky Bet League One.

The Pilgrims led early on at Home Park after Ryan Hardie’s excellent cross was converted emphatically by Panutche Camara, and the Pilgrims looked great value for their lead until the U’s equalised with their first attempt on goal.

Lowe said: “First-half I thought we were very good, we were getting the ball back, counter-pressing, counter-attacking, had some good chances and scored a great goal. Second-half we just stopped playing a little bit out from the back.

A tentative second-half ebbed and flowed, before lurching decisively in United’s favour, when Sam Long and Olamide Shodipo struck in quick succession.

The Greens fought back late on in search of a point, and Luke Jephcott reduced the deficit from the spot after Byron Moore was fouled, but Argyle could not force an equaliser.

“The second goal is a killer really, because the right-back scored it. We’ve turned our back in their half, two people around him, he’s got down the side, we haven’t stopped the cross, he’s carried on and scored a good goal on their behalf, but a rubbish goal on our behalf.

“The penalty is a sucker-punch, isn’t it? Will doesn’t need to go to ground, I think the next movement the ball would’ve gone out. That being said, he’s actually got a bit of the ball.

“I thought it was a game of two halves – the first-half was very good from us. We shouldn’t be scoring two goals and losing, but we are where we are. It’s not ideal, it’s not nice, but the lads are giving us everything.

“Is it just a lack of quality, a lack of know-how? Possibly. There were some situations in the game that we need to possibly do the same thing – to be a bit cuter and more astute.

“Sometimes you have to give the opposition a bit of credit – they were on the front foot, and they were ready to press at times, but we’ve got patterns of how we get out from that.”

The Argyle manager felt that, after an excellent first-half showing, his team did not move the ball through the thirds as often as he would have liked after the break.

He said: “I know they put a bit of pressure on, but as I always say to the lads, I’ll take responsibility if you give the ball away, because that’s the way I want them to play – I just felt we went a little bit too long to Ryan [Hardie] and Jephs [Luke Jephcott].

“Once you beat that first press, you’ve got arguably the best footballing midfielder in the league in Lewis Macleod, who can retain the ball anywhere on the pitch. And then you’ve got Danny Mayor and Panutche Camara running with the ball, and wing-backs who are high and wide, so we just felt we didn’t do it.

“We are a good footballing team in them moments, but we need to take that into 80, 90 minutes. We can’t just be a good team for 45 minutes. We have to build on it and progress as much as we possibly can.”

Attention now turns to the New Year visit of Gillingham at Home Park on Saturday, with Lowe keen to bounce back quickly.

“We’ll always keep fighting, we’ll always keep trying. Sometimes there’s a lack of quality and a lack of know-how, and that’s just the league. We’ve been through a bit of a tough period of late, and we’ve bounced out of that with a win and a draw at Charlton.”