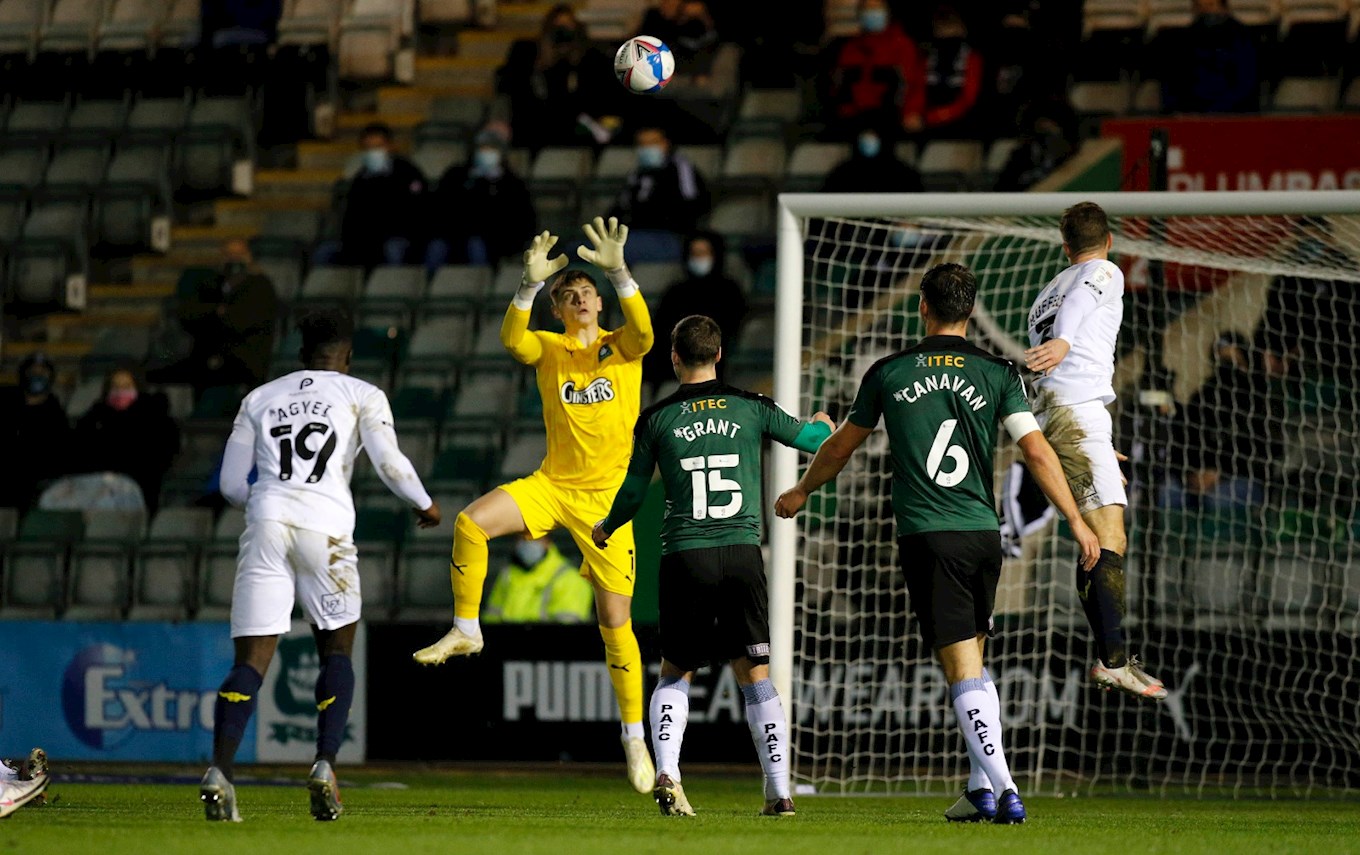 Argyle ended a turbulent 2020 for football with a stirring display, particularly in the first half, before eventually going down to an unfortunate 3-2 defeat against a powerful Oxford United.

The Greens were outstanding in the opening half-hour and probably deserved to lead by more than the 12th minute goal scored by Panutche Camara, but the visitors drew level with a close-range effort from Josh Ruffels.

There was nothing between the sides after the break until Sam Long nudged Oxford in front with 15 minutes remaining and it was seemingly game over when Olamide Shadipo converted a late penalty.

Undeterred, Argyle immediately pulled back through a spot-kick of their own, expertly taken by Luke Jephcott, but the leveller refused to arrive for the Pilgrims.

Argyle manager Ryan Lowe had the rare Christmas luxury of naming the same side for the third game in succession, as the Pilgrims looked to build on two excellent displays in defeating MK Dons and the entertaining 2-2 draw at Charlton on Boxing Day.

Oxford boss Karl Robinson made three changes from the 2-0 win over Wimbledon on Saturday, bringing in Dan Agyei, Jamie Hanson and Shodipo for Alex Gorrin, Jordan Obita and Matty Taylor.

The Green Army inside Home Park were soon in full voice following an early interception and surge forward from Camara, who was outstanding at the Valley and quickly becoming very popular among supporters.

The next engine-room burst came from Danny Mayor threading a pass to Joe Edwards, who had made a run inside from the flank and was bundled over for a free-kick in a promising position, but Conor Grant’s effort was blocked by the wall.

Argyle continued with their forward momentum and the wing-back duo of Edwards and Grant provided a constant attacking option for the Pilgrims. One clever flick from Grant released Mayor, who then slipped a pass to Ryan Hardie for a dinked cross headed clear under heavy pressure by Rob Atkinson.

The combination of Mayor feeding a pass into the left channel for Hardie provided the ammunition for Argyle’s opening goal, as the low cross was perfect for the onrushing Camara to superbly control a confident finish into the roof of the net.

It was a beautifully incisive goal from the Greens and the creative credit to Mayor and Hardie, with even more plaudits for Camara, who arrived in the box at great pace and still had the composure to stroke a delightful effort past goalkeeper Jack Stevens.

The willing runs of Hardie was causing chaos in the Oxford defence and the visitors could find no respite in their forward department, with Argyle winning the midfield battle and Mike Cooper enjoying a blissfully quiet opening 20 minutes between the sticks.

Argyle were performing with terrific belief, a point emphasised by Mayor cutting inside on his right foot for a curler that drifted narrowly wide of the far post. The U’s finally got a glimpse of Cooper’s goal from a corner but the young custodian claimed the cross with admirable assurance.

The frenetic attacking tempo from Argyle took a momentary breather before the half-hour but the Oxford threat remained limited to set-pieces. Cooper, again, was commanding in his box and launched a huge throw that very nearly found Hardie running through on goal.

Grant continued the restoration of Pilgrim dominance with a fabulous weaving run inside from the left and a low right-footed effort that was well held by Stevens.

A low cross from the right by James Henry did pose slightly more of a problem for the Pilgrims but a combination of Cooper and Edwards did enough to prevent Shodipo getting a shot on goal.

Almost immediately in response, the rampaging Camara fizzed a pass wide to Hardie, who had too much pace for the Oxford defence and his cut back to Jephcott forced the retreating Elliott Moore into a desperate interception that very nearly ricocheted past Stevens and into his own net.

It was, therefore, massively against the run of play when the Greens conceded an equaliser on 37 minutes, when a free-kick from Henry was whipped into a difficult area and Ruffels pounced first to force a scruffy goal past the stranded Cooper.

Oxford continued with the aerial barrage and Argyle were grateful to Niall Canavan for an excellent defensive header to repel the latest corner. It was an approach the visitors maintained with a deep free-kick finding the head of Atkinson to nod down in the area and Cooper made a brave block from Moore’s stabbed effort.

After playing so well for 35 minutes, Argyle ended the first period with a spell of defensive pressure but could still go into the half-time interval feeling very satisfied with the excellent fluency in their attacking work.

Camara started the second half in the same mood as the first, winning the ball in midfield and threading a pass through the middle for Hardie, but he was well tracked by Long for Oxford.

The visitors did get a bizarre look at Cooper’s goal when a shot from Marcus McGuane was shanked horribly into the sky and somehow looped to Henry on the right side of the area, but he fired over with Kelland Watts quickly pressurising the former Milwall and Wolves midfielder.

Argyle came back with a clever turn in the centre circle from Jephcott and his slide-rule pass for the run of Hardie carried just a fraction too much weight, allowing Stevens to race off his line and snuff out the danger.

While Oxford tested the Greens with successive launched throw-ins from Long, Argyle replied with some impressive patient passing and Mayor was a growing influence as the hour-mark ticked over.

One zig-zag run across the pitch from Mayor ended with a pass to Edwards for a first-time cross that almost picked out Jephcott at the back post, with Robinson deciding the time was right to make his first two changes, withdrawing Henry and Liam Kelly for Sean Clare and Anthony Forde.

The aerial bombardment continued from Oxford and a deep corner picked out Atkinson at the back-post for a downward header that was superbly cleared off the line by Edwards.

Byron Moore was introduced for Grant as the game entered the final quarter, quickly followed by Frank Nouble replacing Hardie in the vanguard.

Sadly for Argyle, Oxford edged in front moments later, as Clare found room on the right for a low cross that picked out Long, who had burst forward from full-back, and the finish was guided neatly into the bottom corner.

Mark Sykes for Jamie Hanson was the next Oxford switch but Argyle were soon on the attack with yet another mesmerising dribble from Mayor and his shot was possibly goalbound before it deflected off the head of Jephcott for a goal-kick.

Argyle’s night took a turn for the worse ten minutes from time when Will Aimson lunged into a tackle on Shodipo. The Pilgrim definitely got some of the ball but referee Brett Huxtable pointed to the spot.

Shodipo picked himself up and calmly rolled the penalty into the net for a third goal that gave the Greens a steep mountain to climb, a journey they started with instant character.

Within a minute, Huxtable was pointing to the spot for the Pilgrims after Moore had got the wrong side of Long and was bundled over. Jephcott grabbed the ball and the Argyle leading scorer duly rifled a superb penalty into the top corner.

Dom Telford and Tyrese Fornah came on for Edwards and Macleod for the final six minutes, as the maximum numbers of Green Army permitted under current restrictions made a terrific noise in rousing the troops for one last push.

The fourth official signalled five minutes for Argyle to rescue a point their performance thoroughly warranted and a low cross from Mayor forced Moore into yet another hurried clearance.

The power of Nouble was causing more trouble for the visitors and a loose ball fell to Telford for a low volley that was saved by Stevens and the Pilgrims were unable to find that breakthrough.