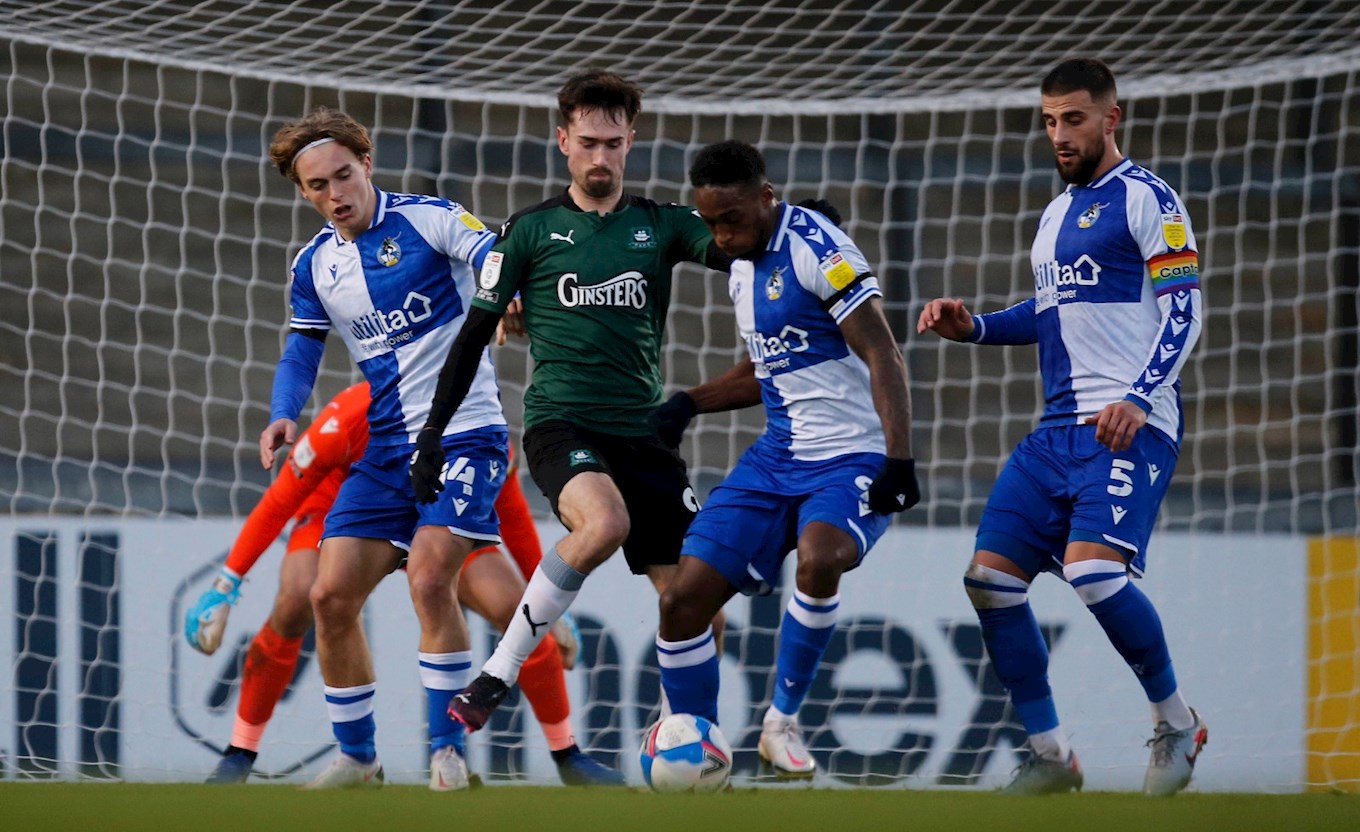 Argyle suffered defeat at Bristol Rovers after conceding two set-piece goals in the first period and a late third from Zain Westbrooke.

The Pirates scored early through a towering header from Alfie Kilgour and they doubled their lead when Luke McCormick forced the ball home following another corner just before the half-hour.

For the next 60-odd minutes, Argyle played with terrific tempo and created numerous opportunities, but were denied by some brilliant goalkeeping from Jordi van Stappershoef. The door was finally shut five minutes from time and the Greens will pick themselves up for the midweek trip to Crewe.

Argyle boss Ryan Lowe made two changes from the side that was so unlucky in going down to a 2-1 defeat against Ipswich last weekend. Ben Reeves replaced the suspended Danny Mayor and Ryan Hardie was preferred in attack to Frank Nouble, with Lewis Macleod and George Cooper returning to the bench after injury.

The new manager at Bristol Rovers, former Exeter supremo Paul Tisdale, made two changes from the 4-2 win at Wimbledon, with van Stappershoef replacing Anssi Jaakola and young Chelsea loan star McCormick (no relation to our own Luke McCormick) came in for Erhun Oztumer

Game number 147 between these two sides, making the Pirates Argyle’s most frequent opponent down the years, started in glorious sunshine but sadly still no supporters able to attend the Memorial Stadium.

The first moment of danger came from Josh Grant, who spent time on loan at Home Park last season, but the midfielder was expertly shepherded away from goal by the covering Kelland Watts.

Argyle responded with a clever reverse pass over the top by Luke Jephcott for Ryan Hardie, who used pace and strength to hold off the Rovers defence before steering a low left-footer inches wide.

It proved to be a painful miss for the Greens, as Rovers took the lead soon after. Luke Leahy delivered an outswinging corner from the left and Kilgour met the ball with a thumping header into the top corner.

The Pilgrims were thankful to the post from the next dart forward by the hosts, with Ed Upson bustling his way into the box for a bobbling effort that bounced off the upright.

Rovers conjured a slightly bizarre opening midway through the first period and a looping cross from Westbrooke hit the bar, but Mike Cooper did brilliantly to save the rebound effort from Sam Nicholson.

Unfortunately, the subsequent corner led to a second goal for the home side, as McCormick reacted quickest to the loose ball, forcing a low shot into the bottom corner and giving Argyle an early mountain to climb.

Reeves attempted to take the first step with an instinctive half-volley that forced a decent block from van Stappershoef and the one plus side for the Greens was well over an hour left on the clock to retrieve the situation.

A decent move down the right presented another half-chance, as Hardie slid a pass into the box for Jephcott, who immediately laid it back for Reeves to have a blast from distance, but it was straight down the throat of van Stappershoef.

The Green shoots of hope continued with a pass down the line from Jephcott to Hardie and the young Scot weaved a lovely run back inside and a drilled effort blocked by a painful area for Jack Baldwin.

The same combination then manufactured a terrific chance and a fine pass from Hardie picked out Jephcott, who controlled the ball perfectly but, unfortunately, dinked his shot narrowly wide with van Stappershoef beaten.

Argyle were turning the screw and a delightful free-kick from Conor Grant was met by Will Aimson with a well-executed downward header, but credit to van Stappershoef for a fantastic low save.

The Dutchman repeated the trick moments later after another exquisite Grant delivery headed goalward by Hardie, this time acrobatically turning the effort over the bar. It was a hugely encouraging end to an otherwise difficult 45 minutes and a positive platform for the Greens.

Lowe made two switches at the break to hopefully build on that momentum, introducing George Cooper and Byron Moore for Reeves and Edwards. Moore took his place on the left, with Cooper on the right and Grant shifting inside to a midfield role.

Moore soon had a cross cleared at the near post by Kilgour and the resultant corner from Grant found a way to Watts at the back post, who clipped a cross back into the box for Hardie to glance a header narrowly over.

Amid the chaos, Aimson appeared to be tripped in the box but mild claims for a penalty were waved away and Rovers had a stab at taking advantage of the reprieve with a speculative effort from Upson that was screwed wide.

The game had become incredibly stretched and promising situations at both ends, one of which culminated in a skidding shot from distance by Cooper sent wide of the post. Jephcott then had a shot from a tight angle that was comfortable for van Stappershoef.

Rovers replied with a pass from Westbrooke releasing Brandon Hanlan, who, thankfully, dragged his shot wide with Mike Cooper racing off his line to narrow the angle. Back to Argyle, and determined work from George Cooper and Jephcott presented a scruffy chance to Hardie but, again, van Stappershoef was in the right place.

Dom Telford came on for Jephcott to add fresh impetus to the attack and he was so close to getting on the end of a deflected cross from Hardie, as the Pilgrims continued their bombardment of the Pirates.

Argyle had another shout for a penalty when Cooper pinched the ball off Hargreaves but referee Carl Boyeson remained uninterested, and Lowe tried a final roll of the dice by sending on Nouble and Macleod for Grant and Tyrese Fornah.

Sadly for the Greens, the game was up moments later, as Nicholson burst down the left and cut it back for Westbrooke to steer home a low finish.  It was harsh on Argyle and a last-minute header steered against the post by Jerome Opoku summed up the pattern of the afternoon.