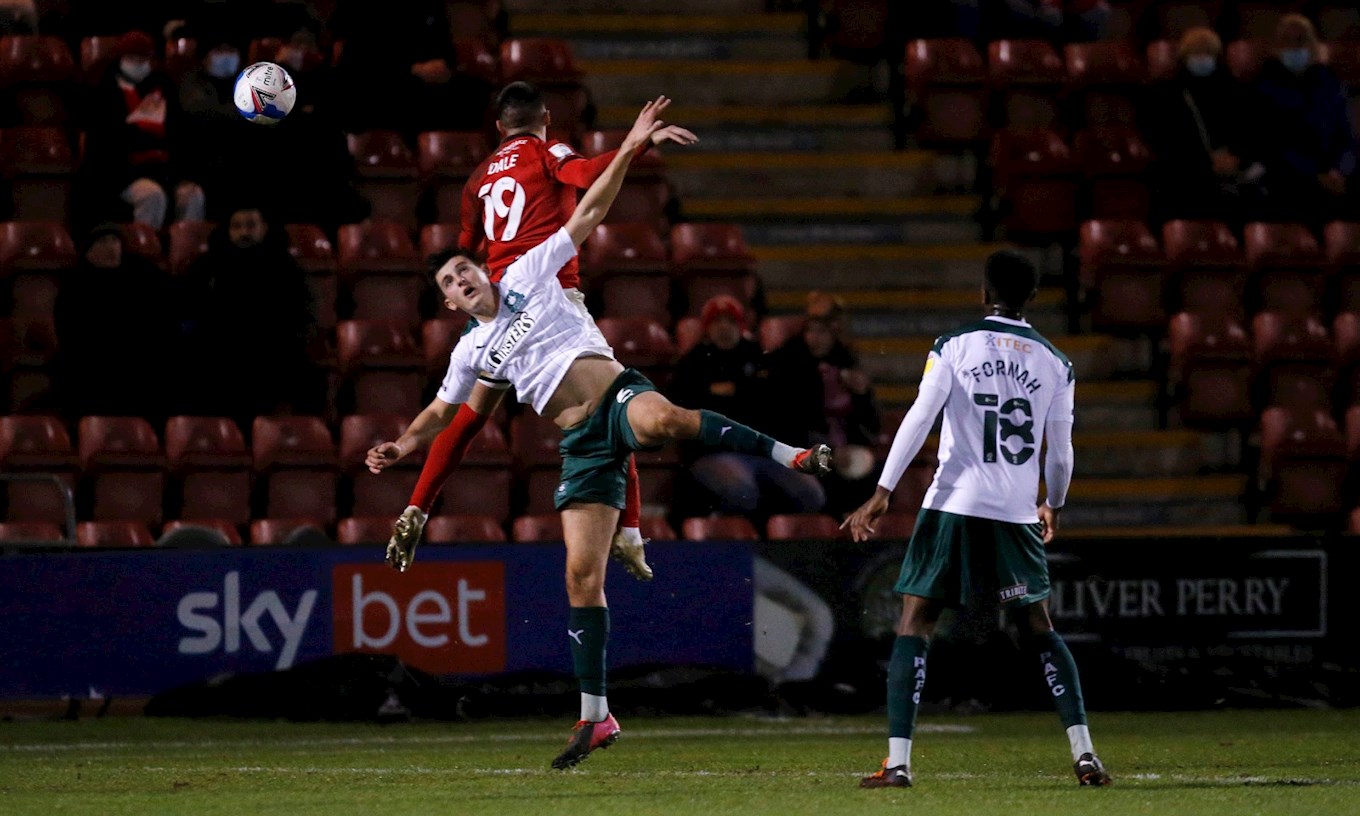 A rousing second-half display from Argyle just fell short of ending a difficult recent run with a point at Crewe Alexandra.

The home side broke the deadlock with a far-post goal from Charlie Kirk midway through the first period and the Greens were left with a big ask when Owen Dale doubled the Crewe lead just before half-time.

The Pilgrims answered that challenge with a massive effort after the break and were given hope when substitute Luke Jephcott pulled one back five minutes from time, but the equaliser refused to arrive.

Crewe manager David Artell stuck with the same side that beat Northampton Town 2-1 on Saturday, thanks to a last-minute winner from midfielder Ryan Wintle.

The early exchanges saw Cooper playing in a more central role behind Nouble and the Greens made a steady start against a youthful Crewe side, with the welcome smattering of supporters back inside the Alexandra Stadium.

The hosts conjured the first chance on nine minutes, with a sharp pass from Kirk finding Oliver Finney in the box, who quickly swivelled for a rising drive expertly turned over the bar by Mike Cooper.

Argyle came back with Kelland Watts winning a free-kick on the left flank and George Cooper whipped over a dangerous dipping cross that sparked some panic in the Crewe defence before the offside flag quelled home concerns.

Crewe won a free-kick of their own in a promising position on 17 minutes but the ambitious effort from captain Harry Pickering was directed well wide of the near post, as the much-changed Pilgrims quietly settled into a solid rhythm.

Unfortunately, that rhythm was broken by the opening goal, when Tom Lowery turned on the edge of the box and drifted a low cross to the back post for Kirk to sneak around and nudge the ball past a stranded Cooper.

A superb tackle from Canavan repelled the next Crewe attack, with Mikael Mandron finding a pocket of space on the edge of the area for a shot, brilliantly blocked by the Pilgrim skipper. Finney did, however, manage to squeeze off a shot from a tight angle that thankfully flashed across the goal to safety.

Argyle responded with a swift passage of neat passing and the ball worked wide to Watts for a cross well cleared by the Crewe defence, while at the other end, Wootton did a fine job in nodding clear a clever dinked cross from Finney.

The Pilgrims began probing in more threatening areas as the first half approached a conclusion but hopes of a recovery were dealt a severe blow when Dale doubled the lead, dancing inside from the right and a low deflected effort left Mike Cooper with no chance.

Jephcott and Lewis Mcleod were introduced at the interval, with Tyrese Fornah and Watts the men withdrawn, as Lowe looked for a reversion to the more familiar formation that has yielded success in the past.

The Greens started the second period with a pleasing spell of possession football and an incisive burst down the right from Moore ended with a cross recycled for another delivery that very nearly picked out the late run from George Cooper.

Argyle won a succession of corners in a spell that showed some shoots of encouragement and tenacious work from Will Aimson to win the third set-piece, as the Greens looked to find some attacking momentum.

There was an improved tempo for the Pilgrims, with Mcleod enjoying an immediate influence in the engine room and Aimson continued his all-action spell with a dynamic intervention in the left channel.

Hardie replaced Nouble on the hour and the work-rate was faultless from the men in green. The key component was finding the attacking edge that was so pleasingly prominent before this difficult recent run.

Hardie introduced himself with a fizzing low drive from distance that was initially spilled by Crewe custodian Will Jaaskelainen, who was mighty grateful to not find a Pilgrim lurking to snap up the rebound.

Grant for Mayor and Edwards for Moore were the final changes for Argyle, and Edwards was instantly within a fraction of getting on the end of a low cross from Cooper, who had done brilliantly to manufacture space on the left wing.

Crewe responded with a terrific low cross from the lively Kirk and Argyle were grateful to Canavan for a sliding challenge to clear the threat. Finney then lashed a shot narrowly over from 22 yards.

Argyle tried to find an answer with a delightful low cross from Grant, picking out the near-post run of Jephcott, who got a toe on the ball, but Jaaskelainen was in the right place to make a save.

The Pilgrims were looking increasingly sharp and confident. The reward came when a low Grant cross into the box ricocheted to Jephcott and he swept the ball home with an assurance that is defining his fledgling career.

Five minutes of normal time remained on the clock, and the Greens were relentless in their tenacious pressing of the hosts. It was just a case of finding that one more decisive opportunity.

Panutche Camara was a major driving force from midfield, as Crewe sought to wind the clock down. A sweeping move down the right did lead to a minor opening, with Camara laying it back to Wootton for an effort curled wide and the final whistle sounded for a home win.