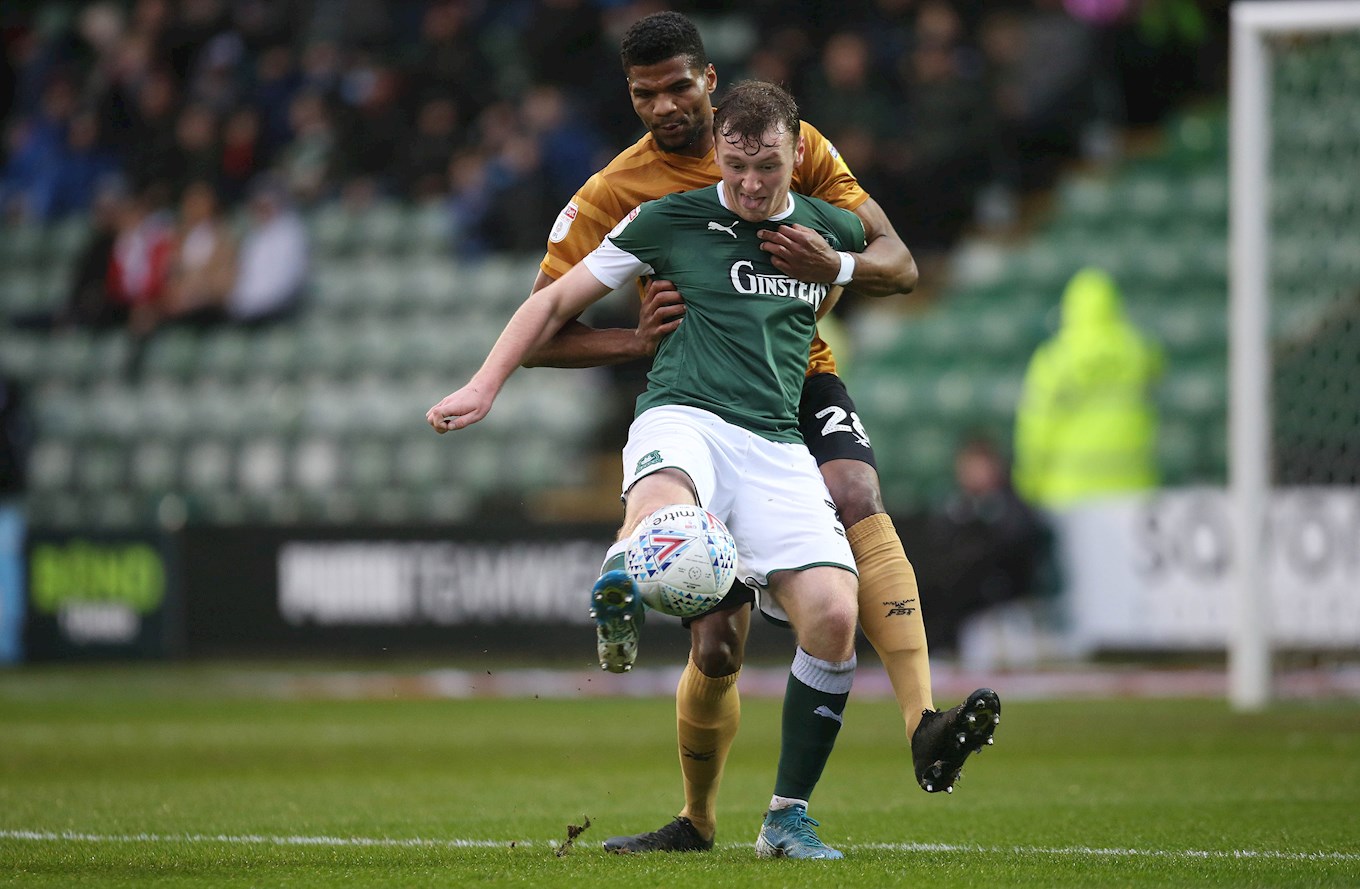 STORM Dennis? Who is he, anyway? Argyle have got Hurricane Luke.

In a year of firsts for the rejuvenated Academy product, another memorable moment put the Pilgrims on their way to three valuable Sky Bet League Two points against their title rivals.

Jephcott headed home his sixth goal of the season – since New Year’s Day – to notch his debut goal in front of the Devonport end, who rejoiced as one their own cancelled out a go-ahead strike from Crewe full-back Harry Pickering five minutes earlier in the second half.

It proved to be the platform for Argyle’s tenth home three-pointer of the campaign, with the match being settled from the penalty spot by Antoni Sarcevic, who fired home his tenth goal of the season from 12 yards.

The Argyle side that took to a pitch that passed a 1pm inspection from referee Tom Nield showed one change to the starting 11 that had begun Tuesday night’s splendid, but gruelling, 3-2 victory two minutes into added time at Salford City.

Josh Grant came into the midfield, taking over the central defensive midfield role occupied by Tyreeq Bakinson in the class of 90+2 performance.

Ryan Hardie, the substitute who showed a clean pair of heels in the Dirty Old Town to outsprint the home defence and slot home the winner, again started on the bench, from where he has scored four times since joining on loan from Blackpool in January.

Callum McFadzean, who had looked none the worse for wear in completing nearly two hours of football in four days following a two-month injury lay-off, continued at left centre-back as captain Gary Sawyer served the final game of a three-match suspension.

Thanks to the sterling work of Chris Ralph and his grounds team, the Home Park Stadium pitch more than passed muster, and was probably in better nick than Salford’s had been on Tuesday.

The overhead conditions at the start were also arguably better than the ones which the Pilgrims had overcome a few weeks earlier at Carlisle, along with the home side’s resistance.

The wind whipped up as the half progressed, though, blowing into the stadium from either end of the Mayflower Grandstand bowl to create a swirling vortex laden with rain.

There is, however, very little wind an inch from the turf, which is, of course, where Argyle like to play their football these days. They were soon into their stride, displaying the Ryan Lowe brand, moving the ball and their bodies into position with their customary alacrity.

One such fluid passage of play saw Danny Mayor play in Jephcott for a low cross that Byron Moore, who used to crew for the opposition, converted from close in. Too close, though, and the visitors were reprieved by the assistant referee flagging for offside.

Both sides coped well with the adverse weather, although there were the odd vaguely comic moments, like when George Cooper could not get the ball in play from a throw-in. Or when, even though it is acknowledged that Mayor can do most things with a football, he could not make it stick in the quadrant as he attempted to take a corner.

Mayor was at the centre of much of what was good about Argyle, and there was plenty of that, with Grant’s solidity allowing him and Sarcevic licence to roam forward. When they did, they found Jephcott a more than willing target. If there is one thing that has noticeably improved in the young striker’s game since he returned from his loan spell at Truro City – apart from the ability to sniff out a goal – it is his hold-up play.

The match turned around at the interval goal-less and Argyle attacked the Devonport end in the second 45 minutes with the wind, now approaching gale-force, behind them. And in their faces. And buffering them from both sides, to be honest.

Crewe had a few moments in the first half when a little touch in front of goal might have a made a big difference but had otherwise untroubled the Pilgrims’ defence, so it was something of a surprise when they took the lead.

Left-back Pickering, who had stayed up after a right-wing corner, worked the ball on to his left foot just outside the edge of the penalty area and, using Grant as shield, curled a good shot around goalkeeper Alex Palmer.

Argyle's response was immediate. Moore stretched his legs on the right flank, got one back on Pickering by burning him off before delivering a pinpoint cross to the near post, where Jephcott stole ahead of goalkeeper Will Jaaskelainen to head the equaliser from a couple of yards.

Crewe should have retaken the lead when, somehow, they managed to break three on one. Stephen Walker did everything right, evading last man Joe Edwards’ sliding challenge and drawing Palmer before sliding the ball to Chris Porter. Who did everything wrong.

Somehow – and it was not down to weather conditions or the state of the pitch – Crewe’s main striker and their leading scorer this season dragged his shot wide of the most open of open goals. If Porter did not feel bad enough, he had to endure Home Park laughing to the echo.

Argyle showed no sympathy, though, and soon forged ruthlessly ahead. Sarcevic drove into the Crewe penalty area for a shot that was well saved by Jaaskelainen. Mayor nimbly reached the rebound ahead of anyone and was felled as he did so.

The penalty was converted powerfully, low to Jaaskelainen’s right by Sarcevic.

There was still work to be done to see out the game, and some astute reinforcements from the bench pumped some fresh blood into the squad effort to complete a fine afternoon, in one sense only.