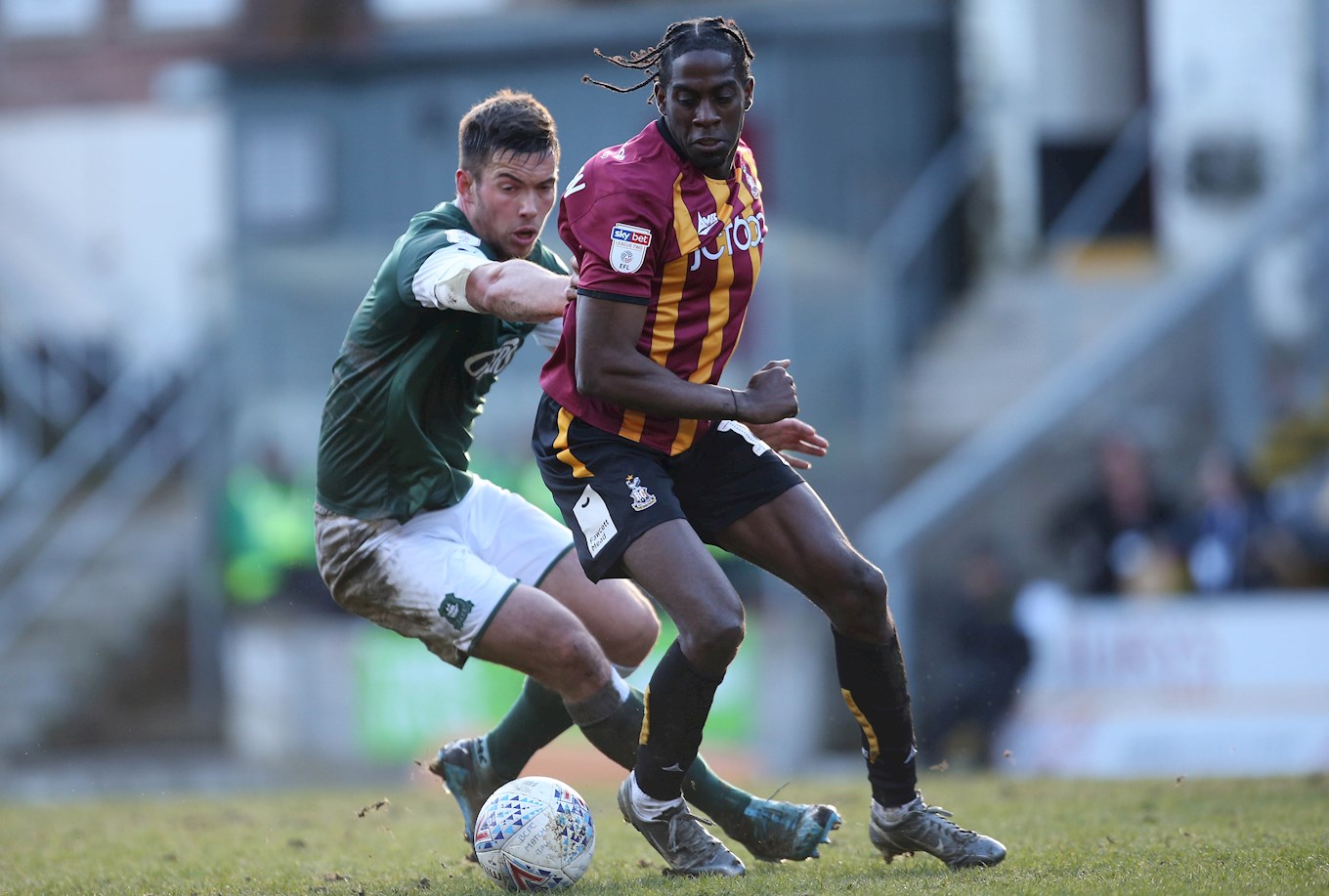 READ nothing into this result.

Argyle’s defeat was as unjust as they come and should in no way detract from their performance, nor from their prospects of winning promotion from Sky Bet League Two.

The game, played on a mess of a pitch, was defined by the sending-off of Argyle captain Gary Sawyer towards the end of a first half dominated by the Pilgrims after they had conceded an early goal to Ben Richards-Everton.

The red card was extraordinarily harsh, given that Sawyer had apparently won the ball in a challenge with Dylan Connolly, who made the most of the coming together, as, indeed, he had earlier when he and Callum McFadzean clashed.

Inevitably, Connolly rubbed Argyle’s noses in it when he converted from long range a just before half-time.

Down to ten men and two behind, Argyle never stopped believing for a minute and bossed the second half as much as they had the first.

Even when Antoni Sarcevic suffered from a similarly awful refereeing decision, with Connolly again milking a nothing challenge, and was also sent off, they simply would not lay down and die.

The nine men pulled a goal back through substitute Ryan Hardie and, just for a moment, looked like pulling off a massive point, only to run out of time, which was about the only thing they ran out of on a day when they showed huge reserves of character and resilience, not to say talent.

After an equally eventful prelude to the game, which included two pitch inspections from match referee Carl Boyeson, Argyle manager Ryan Lowe elected to put out a starting 11 unchanged from the one that had begun the previous home match with obdurate Cambridge United.

Boyeson’s inspections will have informed him that conditions underfoot were largely squelchy on a horribly mucky pitch that bore many areas of scarring, but that the surface was not a danger to participants and therefore playable.

Clearly, though, it was not conducive to the slick style that has become Lowe’s hallmark and his passion since he walked through the doors at Home Park, and one wondered whether Bradford’s fine home record was due at least in part to what golfers, especially, like to call local knowledge.

Centre-back Scott Wootton made his 50th Argyle appearance as the Pilgrims played an EFL match on February 29 for only the third time in their history.

The previous occasion had been a doubly unhappy one in 1992, when current Argyle goalkeeping coach Rhys Wilmot was not only beaten twice by Ipswich Town in a 2-0 Second Division defeat at Portman Road but was also involved in an unfortunate collision that saw team-mate Robbie Turner break his leg.

To add to Wilmot’s misery, he found out on the Monday after the match, while visiting Turner, that Argyle had appointed Peter Shilton as player-manager, effectively ending a Home Park career that saw him eventually keep goal 147 times.

Bradford's starting 11 showed three changes to the one that had lost 2-1 at Newport County in their previous game (so maybe they are not as expert in testing conditions, after all), including a recall for ex-Pilgrim Kelvin Mellor. Another former Pilgrim, Anthony O'Connor, was also in the side.

Argyle started well, with no compromise on their season-long game-plan, moving the ball surprisingly well despite the unhelpful surface.

It was Bradford’s more direct methods that paid off first, though. Having won a corner with the help of Mellor’s speared long throw-ins, they took the lead when Richards-Everton rose at the far post to head home Connor Wood’s excellent set-piece delivery.

Argyle rolled up their sleeves and ploughed on through the mud. Patience produced opportunities, none better than one that fell to McFadzean, stealing up on the far post: a combination of a slightly heavy first touch and goalkeeper Richard O’Donnell racing from his line put off McFadzean enough for him to rush his shot.

Gradually, Argyle took control and penned Bradford back inside their own half to such an extent that, when, after a sustained period of Pilgrims pressure, the Bantams put a fairly aimless ball into the penalty area, the home fans’ applause was disproportionally approving.

Argyle resumed their assault on the home side’s creaking defence, with the left side of the attack particularly prominent. Although McFadzean and Mayor had been caught out on one set-piece, when the ball just refused to roll, they continued to weave their magic and Jephcott nearly profited when he came to the near post and sent off a shot on the spin that lacked the necessary power to trouble O’Donnell.

The game turned in the five minutes leading up to the interval. First, Sawyer was dismissed after challenging with Connolly for a ball that had stuck on the surface and which the Argyle skipper appeared to have played. Connolly, though, went down as if he had been sawn off at the knees and Boyeson somehow saw malice in Sawyer’s tackle, reaching immediately for the red card.

Sawyer, who had not received a straight red card in his entire career up until the beginning of February, has now been dismissed twice in his last four outings.

Before Argyle could reach the sanctuary of the dressing-room, in the very last seconds of the two minutes added on to the first 45, they conceded a free-kick. Inevitably, Connolly scored from it, the quality of the strike tainted by the part that he played in Sawyer’s dismissal.

Argyle brought on Ryans Hardie and Taylor at the interval and rejigged a little, with McFadzean slotting in to the left centre-back role and Mayor and Moore operating on the width of a four-man midfield.

Still two up front, though, and a burning sense of injustice, which combined to produce problems for Bradford, after Alex Palmer had saved well from Lee Novak and Connolly as Bradford exploited the extra space.

Sarcevic drove into the area and, after the ball bobbled around a bit, it fell for former Bradford junior Canavan, who fired over when well placed.

Another Pilgrims thrust, started by Mayor, ended with Mellor nearly turning the ball past O’Donnell, before, at the other end, Clayton Donaldson failed to convert a chance in front of an open goal that would qualify for Miss of the Season had not Crewe's Chris Porter already wrapped that one up.

Back came Argyle. Tyreeq Bakinson fired just wide before Hardie broke through and was denied a shot at the last by O’Connor, with Moore being prevented from making more of the loose ball by O’Donnell.

Bakinson was eventually substituted for Dom Telford, as Argyle moved to a midfield diamond – with ten men. They were not going to die wondering, putting up a fight to the last.

Boyeson nearly had the final word, when with Connolly again involved, he dismissed Sarcevic after the Argyle man had clearly won the ball in a challenge. Utterly ridiculous.

Nearly the final word. Hardie struck, and still Argyle would not chuck in the towel.

Relying on Palmer to tie up one end, they kept going.

They should be very proud.