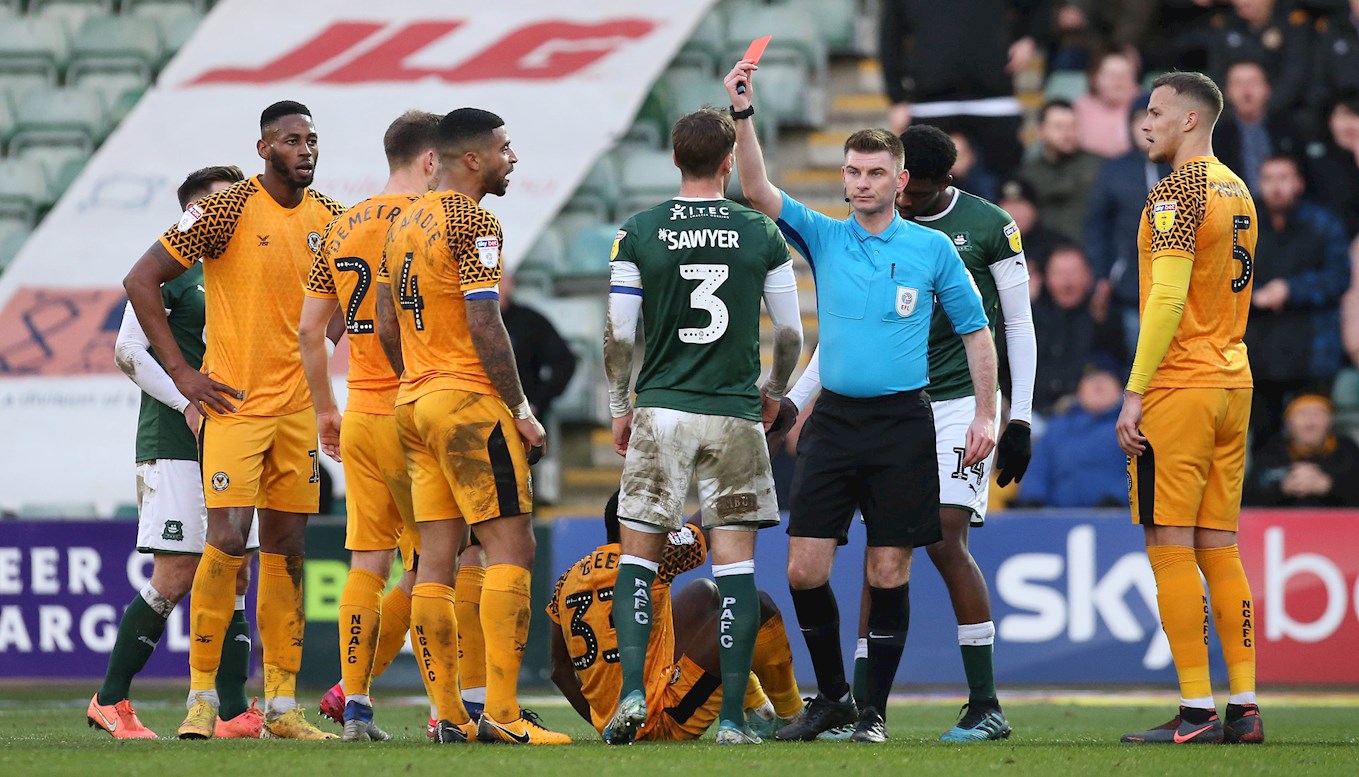 GARY Sawyer will have to be a captain from the sidelines for Argyle’s Sky Bet League Two fixtures against Colchester, Salford and Crewe over the next week.

Gaz was shown the first red card of his career in the 1-0 win over Newport last weekend after a robust challenge and the three-match suspension begins with the trip to Colchester tomorrow.

It is a tough one to take for the experienced defender, who has proven a huge asset to manager Ryan Lowe but, after analysing the robust tackle that led to his dismissal, the Pilgrims felt an appeal against the decision would not be worthwhile.

“It was a bit harsh on Gaz, we addressed it very closely and we spoke to people about it, but it’s tough, “ said Ryan. “It’s very rare a referee is going to reverse their decision, which is fine, but we felt at the time that the melee after was what got him sent off.

“When you look at the red card, it’s 50-50. You’d be happy if it went for you and unhappy if it went against you. Gaz has had to take it one the chin and unfortunate for him, but it is only a week, [as we play] Saturday – Tuesday – Saturday.

“We’ve got a squad where we feel someone can step in there and do a job for the team. Gaz said that was his first ever [straight red card], he’s been sent off for two yellows before.

“There was no malice and Gaz is never going to try and hurt someone, he’s just not like that. We got some advice and they did say we’re not going to get away with it, so we move on.

“I’ve got a good relationship with him and we ask him to organise stuff with the boys, days out and meals. He took a bit of a battering off me at the start of the season because I’ll give him everything but, as the captain, he’s got to give me that extra bit more.

“He took that on board and, off the field, he’s one of the best captains I’ve worked with, and on the field, he’s becoming a real tough leader. It’s hard because Gaz isn’t a vocal lad but the stuff he does shine at is behind the scenes and a fantastic servant of this football club.”