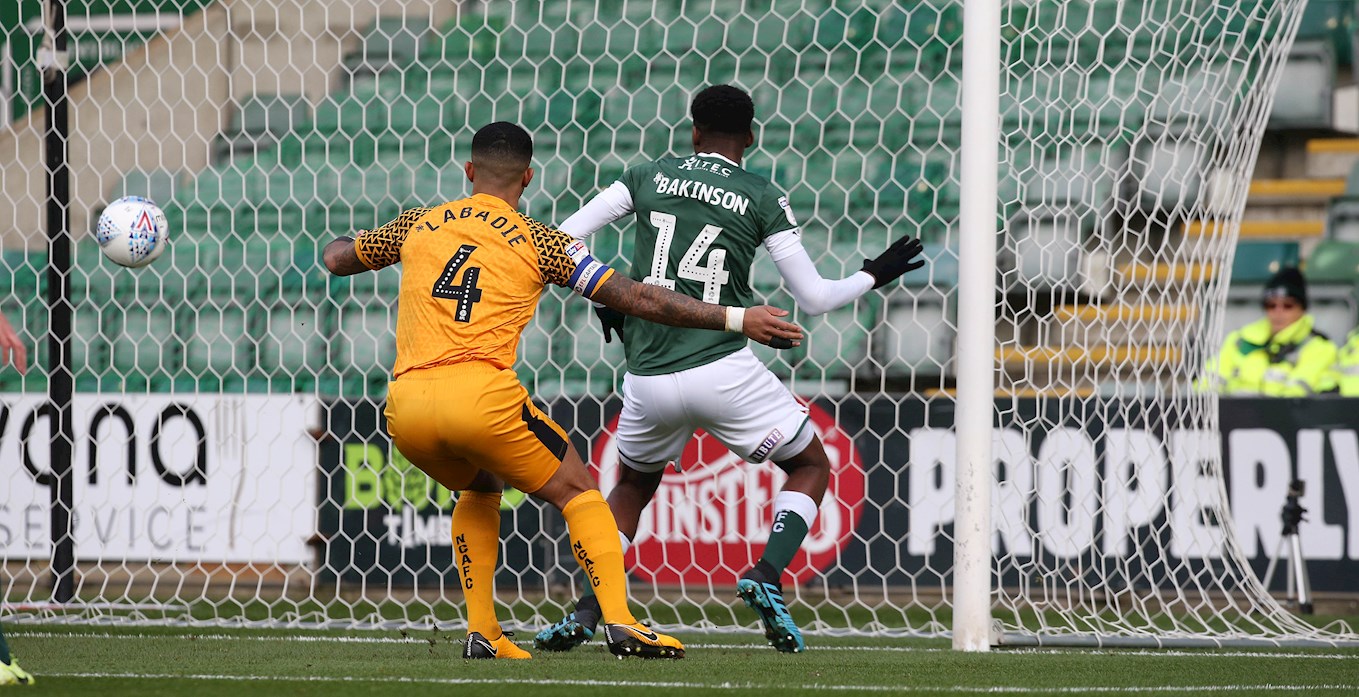 ALL the relevant action in the game that took Argyle back into the Sky Bet League Two promotion places came in the opening and closing five minutes of the Pilgrims’ sixth game on the spin undefeated.

Tyreeq Bakinson opened the scoring for Argyle – against the team that he helped steer to the League Two play-off final last season – soon after kick-off, converting George Cooper’s delivery for his first Pilgrims' goal.

It proved enough, although Argyle had to dig deep as full-time approached after they were reduced to ten men when captain Gary Sawyer was sent off.

Danny Mayor had returned to the Pilgrims’ starting line-up after missing the previous two matches with a minor hamstring concern, one of three changes to the team that had started the previous Tuesday’s 2-2 home draw against Crawley Town.

Luke Jephcott, scorer of his fifth goal in five memorable appearances in that game, was promoted from the substitutes' ranks to form an all-new starting strike pairing with Ryan Hardie – eight goals between them since New Year’s Day.

Conor Grant was also recalled to colours from the bench, having been stripped and ready to replace Sawyer in both of the previous two matches, only for the redoubtable Argyle skipper to bounce back from what had initially appeared to be match-ending injuries.

There was no place anywhere in the match-day squad for this season's leading scorer Antoni Sarcevic, who had also scored against Crawley, and Josh Grant, who were later revealed by manager Ryan Lowe to be not fully fit, while Joe Edwards dropped to among the replacements.

Callum McFadzean, who had not featured in an Argyle squad for three months, was also on the bench, while Newport's starting 11 included forward Jamille Matt, whose seven goals in 12 starts at the end of the 2015-16 season helped propel Argyle to the League Two play-off final.

Otis Khan, a transfer deadline day signing from Mansfield Town, arrived too late in the window to be included in the Exiles' squad.

The central defensive midfield position previously occupied by Josh Grant went to Bakinson, who slotted into the role with panache against his former employers.

His responsibilities did not, however, shackle him, as Newport found out almost before the strains of Semper Fideles had drifted away on the stiff breeze blowing towards Mutley.

As Mayor and Cooper worked the ball on the left, Bakinson spotted an opening, managing to conceal his six-foot-plenty frame from the visiting defence to steal in at the far post and deliver the close-in finish that Cooper’s excellent tenth assist of the season merited.

With the wind now in their sails metaphorically, too, the Pilgrims were an irresistible force that found County far from unmovable.

True, Argyle goalkeeper Alex Palmer had to be on his toes, as he generally is, of course, to keep out a drive from Newport captain Joss Ladabie but that was a fairly rare occurrence of minor anxiety for the Green Army, who were treated to the usual slick fare from Lowe’s pass masters.

Jephcott and Hardie – the 12th different strike pairing to start for the Pilgrims this campaign – showed a seemingly natural timing and empathy that was quite remarkable given that, only a month ago, they had never met, let alone played together.

Hardie came close to scoring his fourth goal since becoming a Pilgrim when Jephcott played him in a for a long-range grubber that Newport goalkeeper Tom King just about castled.

Jephcott’s nose for a goal from any given position showed when he attempted to loop in a header from Scott Wootton’s cross, while Hardie demonstrated that he is more than a simple finisher by combining with Mayor to tee up Conor Grant for a shot that again had King sprawling.

Newport are old sweats at League Two, though, and Argyle’s defence needed to be on the mettle that they have shown all season to repel Matt on a couple of occasions – through an expertly timed Niall Canavan tackle and a header on the post from Jephcott – and Amond, once, a Green boot turning aside his cross-shot following a free-kick from the edge of the penalty area.

Of all Lowe’s astute signings this season, the one that possibly gets less of a mention than most is that of Palmer, whose unfussy goalkeeping under the expert tutelage of Rhys Wilmot has been the bedrock of the promotion push.

After being clipped by Robbie Willmot’s stray boot early in the second half, a lesser goalkeeper than Palmer might have given cause for concern when Labadie broke through, but perfect positioning effectively nullified the threat before the Newport skipper could pull the trigger.

Given such a solid stage, Argyle’s star performers looked to bring the curtain down on Newport’s resistance. Mayor orchestrated their best movements, with Jephcott accepting a perfectly weighted pass before obliging King to get down smartly to his long-range scudder.

County, though, were set on making life as difficult as possible for Argyle, with the result that the second half was a largely unedifying spectacle, lightened in part by some wonderfully skilful play from the likes of Moore and Mayor as the Pilgrims stayed loyal to the game-plan.

As full-time approached, the game suddenly took an unexpected turn. Sawyer was shown a straight red card after catching Jordan Green in a situation made worse by the reaction of the opposition players to the challenge, led by captain Ladabie.

When the dust had settled, Mickey Demetriuo sent the resultant free-kick crashing against the angle of Palmer’s post and crossbar.

Sensing blood, Newport poured forward against Argyle’s ten men and Palmer was again in the right place at the right time to beat out Josh Sheehan’s shot.

With the Green Army taking up cudgels on behalf of the depleted team, and no little resilience from the men they were cheering to the echo, victory was assured.