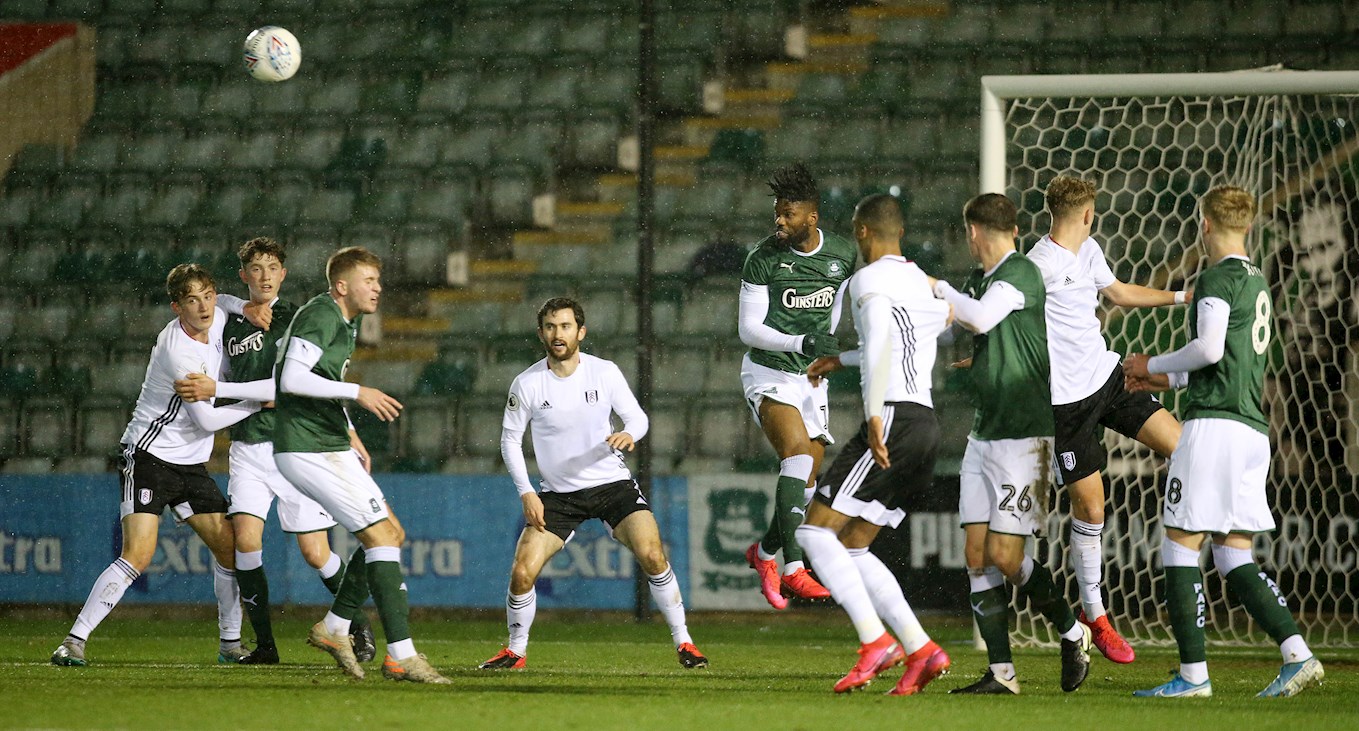 ARGYLE’S spirited Premier League Cup campaign ended in defeat to Fulham at Home Park, sending the visitors into the knock-out stages of the competition.

Fulham took a narrow advantage into the half-time break, having been controversially awarded a goal when Mike Cooper was adjudged to have carried a cross into his own goal by referee Sam Allison, despite the assistant referee’s indication the ball had not crossed the line.

The visitors extended their lead in the first minute of the second term through Jay Stansfield. Argyle mounted a spirited fightback, and deservedly pulled a goal back through Charlie Miller on 66 minutes, the young midfielder converting Jarvis Cleal’s low cross.

The momentum, though, lurched decisively back in the Cottagers’ favour just seconds later, when Miller brought down Ryan de Havilland in the Pilgrims’ area, and Matthew O’Riley converted. Substitute Jayden Harris took the game beyond doubt on 74 minutes, converting a swift counter-attacking move for the visitors, with the Pilgrims committed forward in search of a goal.

The Greens entered the final group match against Fulham knowing that a win would take them through to the knockout stages of the competition for the first time in the club’s history, overcoming two other Category A Academies in the process.

However, that would be no easy task, as their opponents, Fulham, needed only to avoid defeat to secure their own qualification in a group that also contained Everton and Watford.

Coach Kevin Nancekivell selected two of the three allotted over-age prospects, with Grants Conor and Joel included in the side. A third ‘senior’ pro was also named in the form of Dom Telford – although, at 23 years, he was eligible to play without an exemption.

Excluding goalkeeper Cooper, 20, the rest of the squad was made up of young professionals, including captain Adam Randell, and under-18 prospects.

The opening 20 minutes proved to be combative as a sheet of icy February rain lashed the Home Park surface. Both sides, as you would expect from one managed by Ryan Lowe and another recently of the Premier League, played on the deck – with the final ball not quite clicking for either team.

In the end, the deadlock was broken through some severe misfortune on the Greens’ part. An in-swinging corner caught the wind, forcing Cooper to punch up from under the crossbar. In the prevailing gale, the ball whipped down towards the Pilgrims’ goal. Cooper rose highest to claim the rebound, but a mixture of momentum, and the close physical attentions of Fabio Carvalho, forced him towards goal.

The assistant referee immediately indicated that the ball had not crossed the line, only to be overruled by referee Allison. With the luxury of replays afforded to us in the Press Box, it seemed a close call – although Cooper was certainly helped towards his own net by a nudge in the back from Carvalho.

Frustrated, but undeterred, the Greens were nearly level moments later, as Telford’s mazy dribble from deep opened up a crack of space on the edge of the visitors’ area. He cut inside and curled an arcing strike beyond Magnus Norman in the Fulham goal, only to see the ball whistle past the post. Fine margins.

The Greens began the second-half knowing that two goals would be needed, unanswered, to take their Premier League Cup journey any further. A difficult task was made even harder just one minute into the restart, when Stansfield, son of the late Exeter City player Adam, converted Marlon Fossey’s low cross from close range.

Again, Argyle responded. Joel Grant picked up the ball from deep, took three Fulham players with him, and laid in Ryan Law on the intersection between the penalty box and the goalline. Law’s low cross was weighted expertly, but Fulham captain Moritz Jenz arrived just before Telford to hack it away.

The Greens ploughed on in search of a foothold in the tie, and it was Law’s delivery which nearly forced a lifeline. A zippy touch forced him away from the attentions of Fossey, before his drilled cross was punched away by Norman on a slippery surface.

It sparked Argyle’s best spell of the game and a flurry of efforts followed. A speculative strike from Telford was deflected wide for a corner – the result of which saw Randell, a stand-out performer for either side, lose his marker and drive low towards goal. A touch from Mike Peck on the six-yard line almost found its way into the bottom corner, but Norman reacted swiftly to keep his clean sheet intact.

The Greens finally secured reward for their effort on 66 minutes, when wing-back Jarvis Cleal picked the pocket of Cody Drameh and sent a low ball across the face of goal. Although it rolled behind the twin runs of Joel Grant and Telford, the ball fell for Miller on the edge of the area, whose left-footed effort took a sizeable deflection off Jenz before settling in the back of the net.

Unfortunately for Miller, and Argyle, the joy was short-lived. Almost immediately after the restart, the Pilgrims’ goal scorer mistimed a defensive interception and was dispossessed by Ryan de Havilland. In an attempt to make amends, the midfielder dangled a leg out and tripped the Fulham forward. From the spot, O’Riley restored the visitors’ advantage to two.

The goal was O’Riley’s last touch before being substituted. His replacement, Harris, added a fourth with his first touch, tucking the ball away from close-range after a cutting counter-attack.

With the clock ticking down, Randell forced Norman into another good stop, hitting a swerving drive towards the far corner from 30 yards.