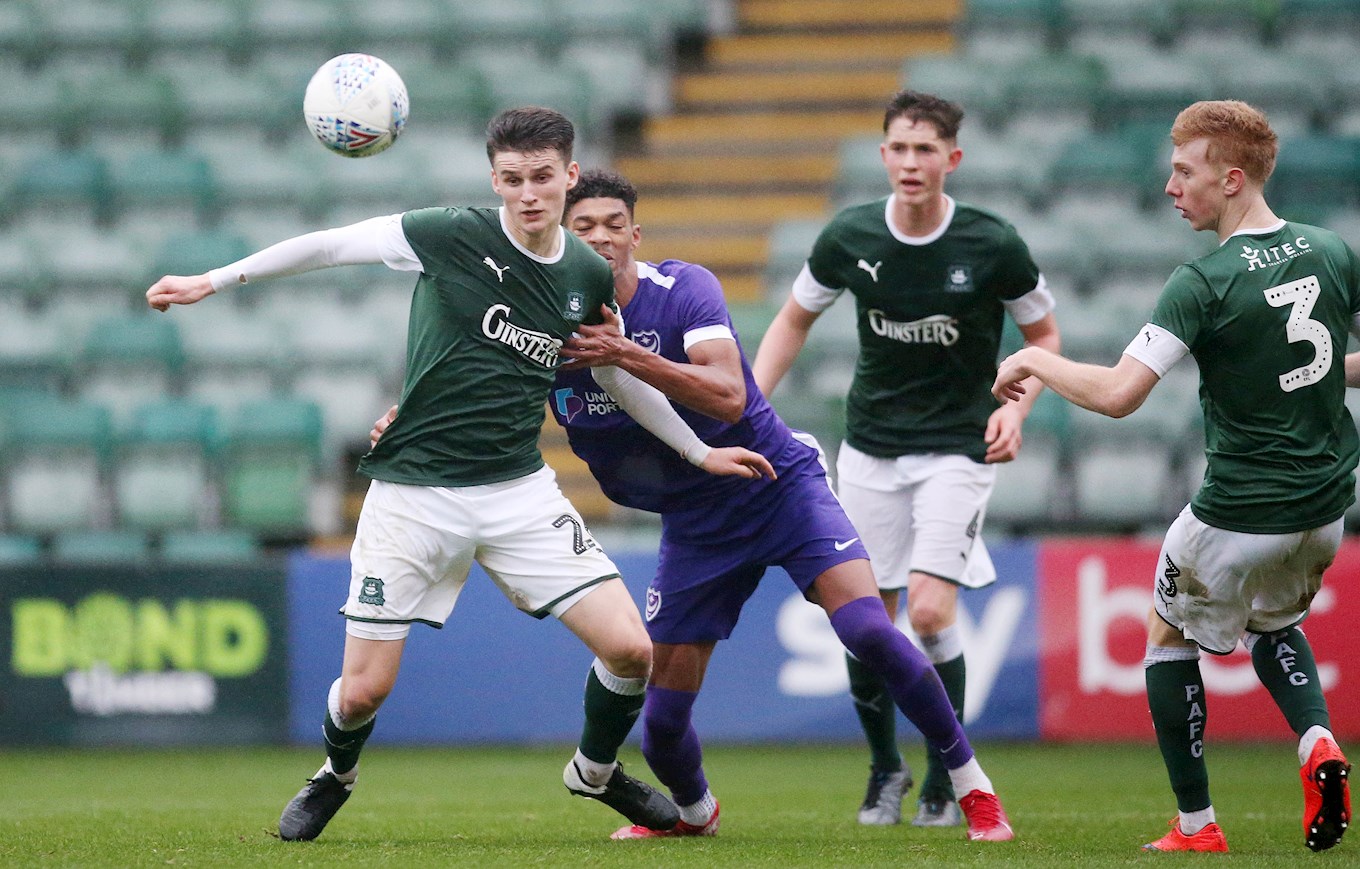 ARGYLE battled out a 1-1 draw with Portsmouth in the Central League Cup on Tuesday afternoon, against a backdrop of howling wind and teeming rain at Home Park.

The Pilgrims dominated the first-half, and deservedly went in ahead at the interval courtesy of Klaidi Lolos’ 20-yard strike. Portsmouth fought back in the second, and a goal from new signing Reeco Hackett-Fairchild earned the visitors a draw.

The Pilgrims staff, led in the dug-out by first-team coach Kevin Nancekivell, named a blend of youth and first-team experience for the clash with Pompey. Senior professionals Joe Riley, Joel and Conor Grant were all selected to start, while a smattering of scholars, including Jarvis Cleal and Charlie Miller, complemented a host of young professionals – led by captain Adam Randell.

The visitors took a similar tack with their selection, but notable selections included captain Jack Whatmough, making a long-awaited return from career-threatening ligament injury, and new signing Hackett-Fairchild, who joined the Blues from non-league Bromley for an undisclosed fee.

The Greens began the game at lightning pace. Within the opening minute, midfielder Conor Grant saw his dipping 30-yard strike deflected narrowly over the bar.

With the first-half wind at their backs, the Pilgrims continued to pin the visitors into their own area, and had the ball in the net shortly after. Randell received the ball on the byeline, and delivered a near-post cross that was turned into his own net by Hackett-Fairchild, before a late offside flag saw the goal disallowed.

The Greens continued to push forward during the game’s infancy, and both Grants, Conor and Joel, had opportunities to to take the lead. First, Conor’s thunderous goalbound drive bodied a Pompey defender, before Joel lost his marker and curled a low left-footed effort at goal, which was smartly stopped by Taylor Seymour.

Argyle had a second goal disallowed on 38 minutes, again for offside, as Conor Grant was smartly slipped in by Klaidi Lolos to fire home from a tight angle. At the other end, Hackett-Fairchild fired wide from the edge of the area, before Leon Maloney spurned Pompey’s best chance of the half – ten yards out on the volley.

Maloney’s frustration was compounded shortly afterwards when the Pilgrims took a deserved lead. Mopping up possession in midfield, Randell feigned the pass out wide, before slotting a beautiful through-ball to Lolos, who took one touch before curling past Seymour from the edge of the area.

As the half drew to a close, Mike Cooper was called into action for the first time, and responded in spectacular fashion, pulling off a superb double-save to first deny Josh Flint from range, and then Maloney’s follow up.

Despite the conditions, both teams continued to try and play football on the deck. The Greens could have doubled their lead on 57 minutes, when Randell got on the end of a Ryan Law cross to backheel at goal from six yards – only for Seymour to hold the shot.

Almost instantly, Pompey were level. Flint found a pocket of space on the right flank to deliver a low cross for the onrushing Hackett-Fairchild, who converted first-time into the roof of the net, giving Cooper no chance.

With the game entering the final third, Cooper made a superb one-on-one stop to deny Maloney, who had gotten in behind the Pilgrims’ last line of defence after a long punt downfield.

With five minutes to go, the young stopper once again came to the fore, standing up well to stop Flint’s toe poke on the six-yard line.