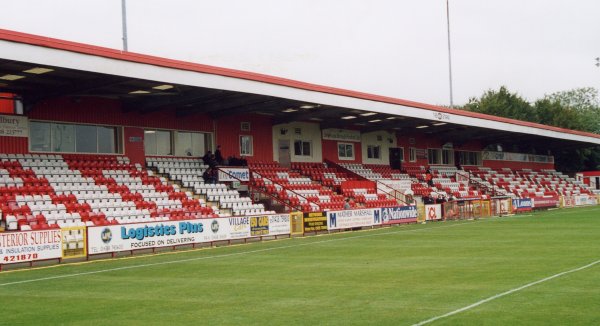 ARGYLE travel to Stevenage this weekend and we bring you our Green Army Guide to the next venue on our list in Sky Bet League Two.

The home of Stevenage is the Lamex Stadium, which accommodates a grand total of 7,550 supporters. A round-trip of 474 miles from Home Park sees a total of 8 hours 15 minutes driving to get to the venue and back.

After gaining promotion to the Football League, the club changed its name from Stevenage Borough FC to Stevenage FC, which was its original name when founded in 1976. The ground was called Broadhall Way for a number years but was renamed the Lamex Stadium in a corporate sponsorship deal.

At the North End of the ground, there has been a build of a new stand, which is a smart-looking, all seated and covered affair with a capacity of 1,428 over a single tier. On the West side is the Main Stand, which is also single-tiered but contain the Club offices and opposite is a steep, covered East Terrace. The South stand is also a single-tiered, seated and covered stand, which was opened in 2001 for visiting supporters, with a capacity of 1,400.

Ever since the club was formed in 1976, Stevenage have been playing in red and white in different variations and each home shirt is worn by the club mascot- Boro Bear.

The ground has all the typical refreshments you would expect at the kiosk: burgers, hot dogs, pasties and pies, but if you want a change of scenery before the match, there’s a social club behind the South Stand, which holds a mixture of home and away supporters.

If you cross the roundabout by the ground, there is a retail park that has various restaurants, such as Pizza Hut, Harvester, McDonalds and Burger King. Alternatively, for the sake of a 15-20 minute walk, you can get into the town centre, which offers more of a range of pubs and restaurants.

Please avoid parking at the Retail Park on match-days, as you are only allowed to park there for 90 minutes. Staying longer could see you with a £100 parking ticket. Otherwise, there is street parking to be found in the local area.