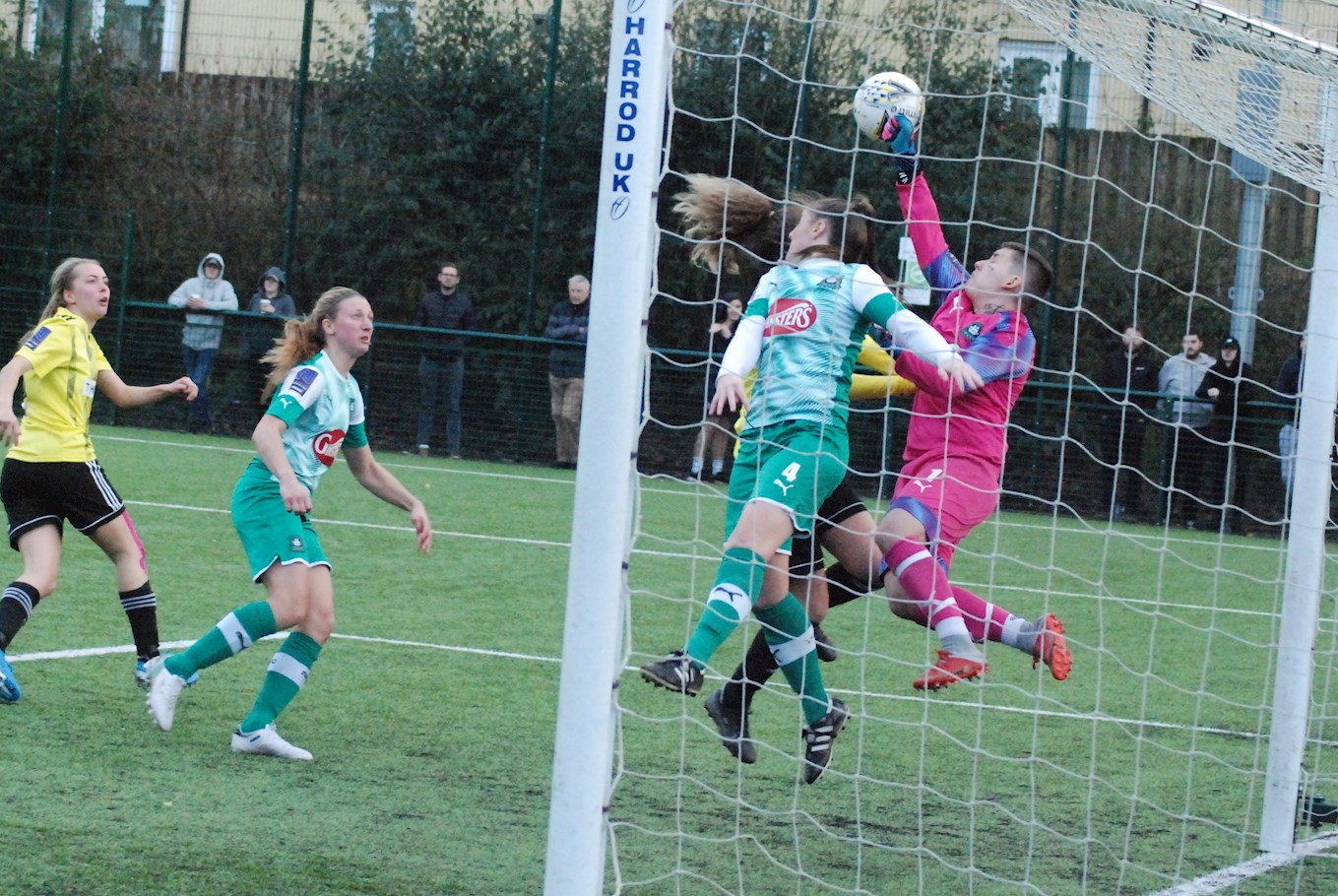 FOOTBALL can be extremely cruel, as Sunday’s game showed when, despite their herculean efforts, a depleted Argyle Ladies went down to a bizarre goal against Crawley in front of 100 fans.

Injuries have cost Argyle dear as, against a lower-league club they could have coped, but losing so many players all at the same time when playing top clubs Watford, Crawley and Oxford United has left Argyle manager Dave Leonard having to dip into the Development team.

Once again, the Greens were deprived of their dynamic midfield. Having already lost Jessie Jones and long-term injured Amber Pollock, Kayley Lane and Becky Dandridge were also sidelined. They were also without Zoe Cunningham and had top striker Natasha Knapman not fully fit on the bench.

Argyle started with youngsters Nelinha Barros, Bethany Everson and Lucy Solloway on the bench. along with striker Knapman and Greek International defender Panagiota Papaioannou who is now back to full fitness.

This meant manager Dave Leonard having to shuffle the pack. Ben Kyle resumed in goal with Bow Jackson, Ebony Dover, Lydia Huntley and Mollie Taylor as the back four. Faye Ivall, Steph Beck and Leah Burridge played in midfield with Beth Everson and Helen Bleazard the wide players and captain Kate Middleton as the lone striker.

It was no surprise that Argyle took time to settle into the game but great link-up play between Jackson and Bleazard ended with her cross towards Middleton being collected by the goalkeeper. Crawley responded with Rachel Palmer and Sian Heather both shooting wide. Argyle reacted with a Bleazard shot going wide. Despite Crawley having the majority of the ball, Argyle were slowly settling into the game and good pressing ended with Everson just failing to make contact with a cross.

A great ball by Dover down the right wing to the overlapping Jackson was snuffed out. Middleton was having a certain amount of success by holding up the ball and playing it into the channels. Some more great link up play between Bleazard and Middleton ended with Ivall just failing to make contact. Just before half-time, a foul on Burridge ended with Bleazard firing over.

In the second half, the game continued as it finished the first, very end-to-end. Argyle then had a let-off when, following a corner, Kyle pulled off a great save to deny Charlotte Owen. Crawley's Maria Ledezma Viso sent in a great cross to Owen whose effort was pushed wide by Kyle for a corner. Argyle survived that mini-crisis and Burridge had a shot saved with Bleazard shooting from distance but cleared the crossbar.

Argyle were now in the ascendancy with everyone battling tenaciously for the ball and Taylor headed over from a corner. With 25 minutes remaining, Leonard sent on Knapman for Dover, which meant Middleton returning to the back four.

A terrific move between Everson, Ivall and Knapman, who shot narrowly wide, was adjudged offside. In the heat of the action Middleton was sin binned in the 78th minute. Despite this, Burridge fed Knapman whose shot was well saved. Argyle were throwing everything into the attack but despite their best efforts they were caught out when a straightforward shot from Laura Palmer went through Kyle's hands to score what proved to be the only goal of the game. Unfortunately, Argyle were unable to grab the equalising goal their work-rate deserved.

Leonard said: “I am going to be positive in the way we played. I am not looking at how we lost the game as it was about the girls that came in and did what they had to do and I thought there were people there who put in their best performance of the season.

“The commitment, the desire, the attitude was what shone through. It was the togetherness the squad had and the resilience that they showed against a strong Crawley side. Anyone that was there felt we were unfortunate not to get something out of the game. If I mentioned one player, it would be disrespectful to the other girls, as all the players needed special praise. For the whole squad process, I think it was a great advert for women’s football.”

Despite the huge number of changes, what was good was that the back four looked solid, the midfield were very tenacious and brave with captain Middleton leading the line well, as Argyle always looked good when pressing down the flanks.

Leonard said: “We did not have much time at training, so the first half was about staying in the game. We have to concentrate on being able to play through teams, which we will concentrate on in training. We have five key players out but I felt the girls adapted and some of the girls came of age and they will only get better.”

The one disappointing aspect was the relatively small attendance and our huge thanks to those who did come along to watch the ladies. It would be great to have more of the Green Army coming along, the standard of football is excellent and the Pilgrims have provided great entertainment in a number of matches already this season.