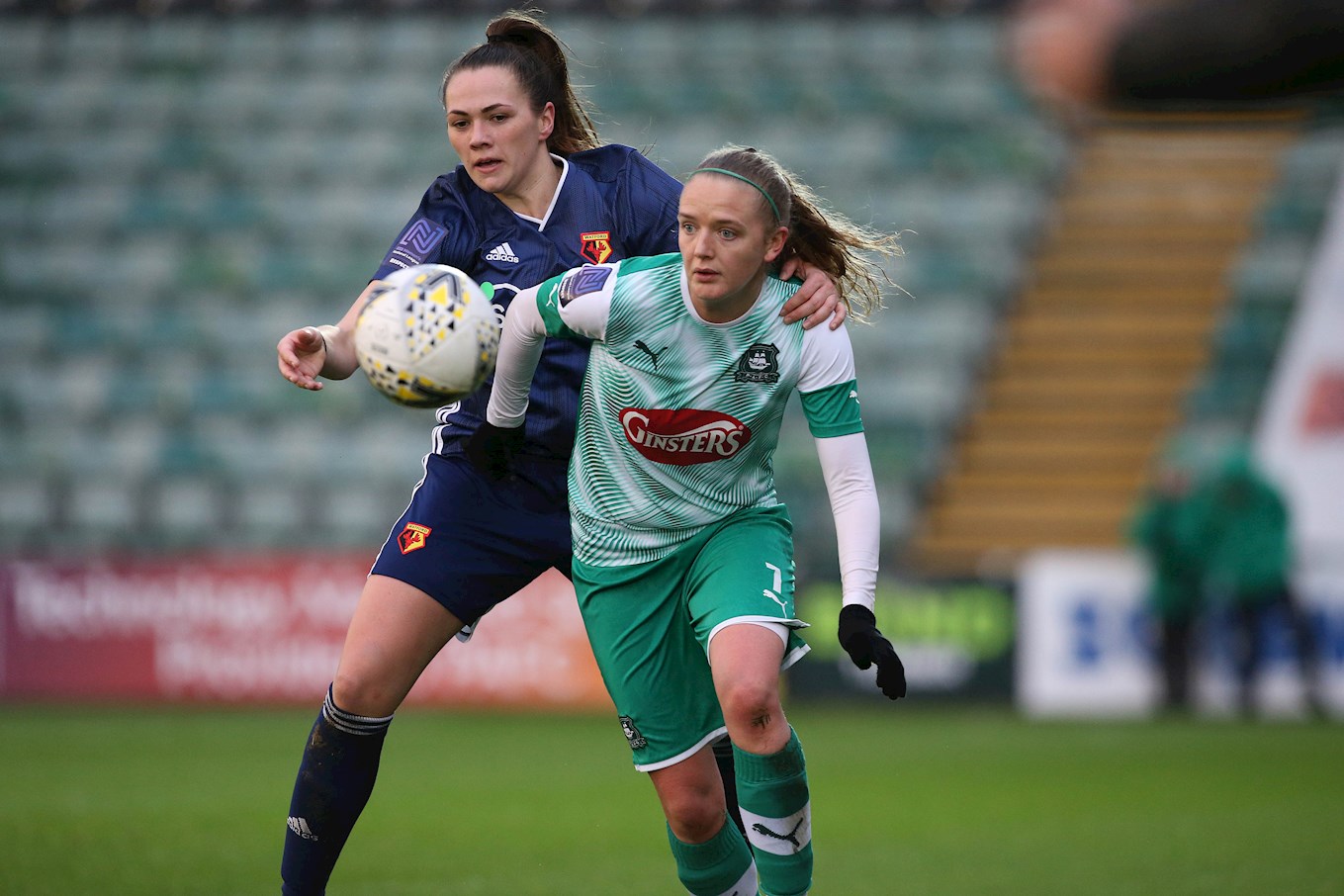 Ladies in the FA Cup

ARGYLE Ladies head for Watford for their FA Cup third round tie on Sunday without the services of top midfielder Jessica Jones.

The England under-20 international joined Argyle last season after playing professional football for Foothills of Calgary in the Women’s Soccer League. She went on to score 12 goals from 22 appearances last season and was named Manager’s Player of the year.

Jones’ all-action midfield style has been an integral part of Argyle’s decent start to the season and has netted five times in 11 appearances this season. The diminutive midfielder, who returned to England to train as a child minder, has taken up a post in the Middle East.

“Losing Jessie will be a massive blow,” said manager Dave Leonard. “You are taking an England under-20 international out of the system and you know the difference. Good luck to her, she has a good career ahead of her, we wish her all the best but the door is always open if she ever wants to come back.”

The Pilgrims will also be without flying winger Amber Pollock, who could be out for the rest of the season with a knee injury, along with Becky Dandridge. Kayley Lane and Helen Bleazard are also suffering knocks but have been included in the squad, as has goalkeeper Ben Kyle, who returns to the squad after a long-term hand injury.

Leonard added: “Losing Amber is also a big blow, as she brings balance to the side but we've just got to close ranks and give it a go, as it will be a really tough game. Goalkeeper Kyle has worked hard since injuring a wrist and goalkeeping coach Jason Haswell has been doing a lot of work, but we will see how the wrist reacts.”

It all means Leonard will be without five of the starting squad, who played that remarkable 5-4 defeat against Watford at Home Park before Christmas.

“We will be looking at injuries with several key players but I have included youngsters Beth Everson and Nelinha Barros from the Development team,” said the boss. “I know we are suffering from injuries to key players but its giving a youngster the chance to get involved.”

“She [Barros} has worked really well in training, I think a lot of her. I like the way she does things, she is a committed youngster and this is a reward for her hard work. “We have got to be resilient, we have lost our last two league games but the last time we did that, we went on a run of 11 games unbeaten, so we need to start 2020 on the front foot.”

A win for Argyle and they could meet a top Super League team in the next round.

It is also a return to action for Argyles Development team, who travel to Feniton in the FA Women’s South-West League Western Division. Argyle go into the New Year knowing that, after a terrible start to the season, they have won their last six matches to head the table.

The league is so tight that any one of four teams could take the title, including second-place Feniton. Argyle have played Feniton twice already, winning 9-5 in the league and 7-3 in the League Cup, but will have to do without captain Rachel Javan, who is still is struggling with a hamstring injury and Greek International Panagiota Papaioannou.

On the plus side, they welcome back the experienced Ellie Bishop, Jodie Randall and Rachel Heron. The coaching staff are pleased to see another one of their promising youngsters called into the first-team squad. Nelinha (Milan) Barros gets her chance after impressing with her attitude, commitment and performances within the Development set-up.