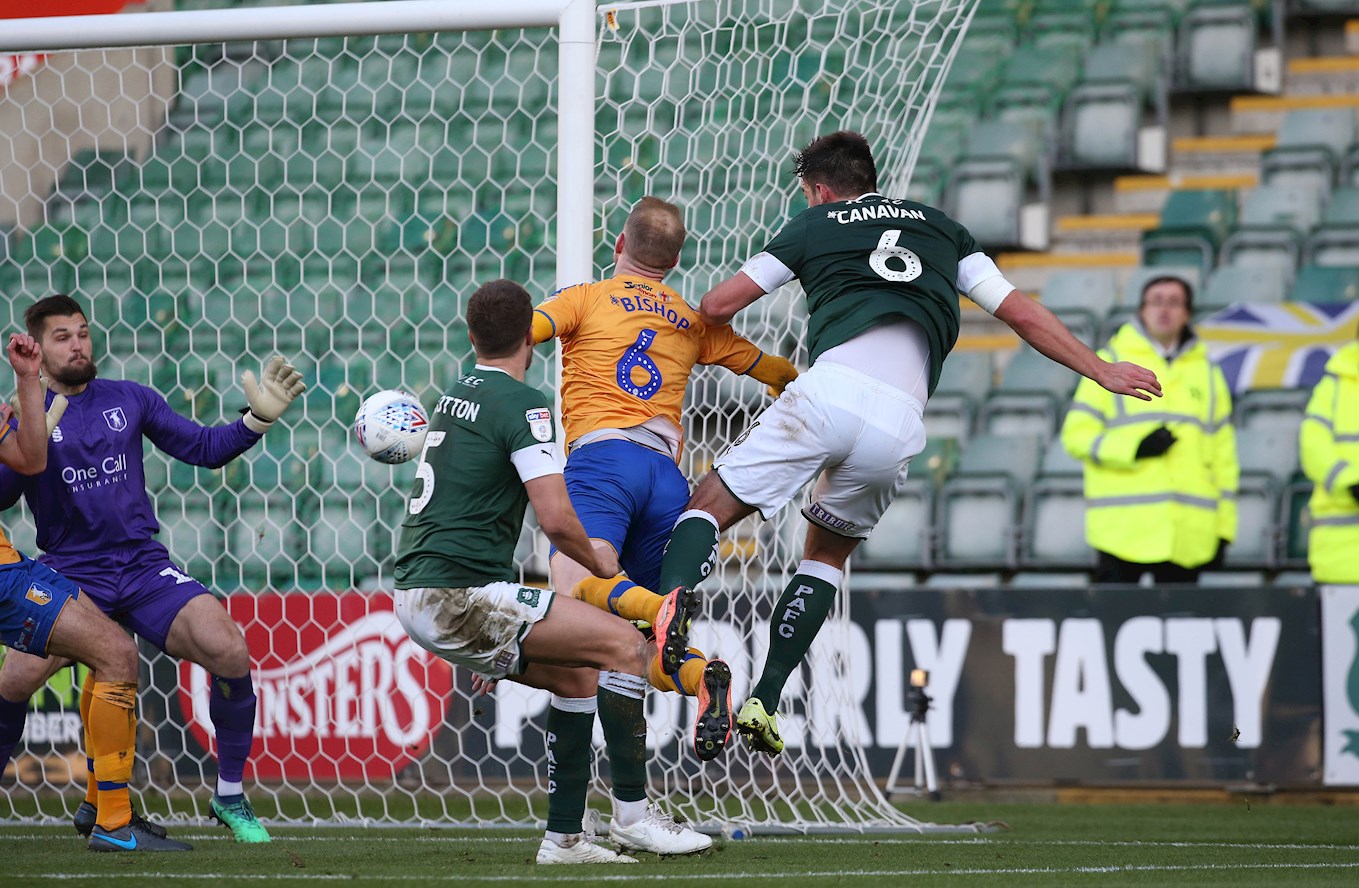 ARGYLE’S relentless search for Sky Bet League One football shows no signs of abating after goals from Niall Canavan, Antoni Sarcevic and new loan signing Ryan Hardie propelled them to fourth place in League Two after an 11th win from their last 16 matches.

Canavan was eye-catching at both ends of Home Park, nodding in a free-kick from the Pilgrims’ assist-king George Cooper to give Argyle the lead at half-time, after which he expertly cleared Nicky Maynard’s zinging shot off te goal-line. Small wonder that the Devonport end have bequeathed Sonny Bradley’s ‘Magic Hat’ song to him.

Sarcevic then converted a penalty to put Argyle firmly in the box seat before Mansfield substitute Andy Cook pulled a goal back. It never looked enough to derail the Pilgrims even before Hardie’s injury-time denouement.

Argyle manager Ryan Lowe had selected the same starting 11 for the third match in a row, following excellent victories at Scunthorpe and Carlisle that had garnered six points.

Young striker Luke Jephcott had scored twice in each of those two games since being recalled from a loan spell at Truro City and again led the attack, looking to become the first Pilgrim in nearly a century to land a double in three successive league matches.

Hardie, who marked his debut at Carlisle by scoring just four minutes after coming on as a second-half substitute, again began the game on the bench, and midfielder Tyreeq Bakinson, another impressive loan capture, made his home debut after joining from Bristol City for the rest of the campaign.

The considerable versatility of the Argyle squad that manager Ryan Lowe has put together was amply illustrated by the fact that only four Pilgrims occupied the same position as they did in the previous home game against Swindon.

No-one started sharper for Argyle than goalkeeper Alex Palmer, who made an excellent save in the first minute of the game as CJ Hamilton rose at the far post for a powerful downward header of Danny Rose’s cross.

Mansfield, responding, perhaps, to criticism of their previous week’s home defeat by Forest Green Rovers continued to test the Pilgrims’ defensive resilience, and Palmer again lived up to his Big Al sobriquet by spreading himself to thwart Nicky Maynard, who had sprung on to a ball over the top of the defence.

In between, Scott Wootton had shown perfect timing to beat Hamilton to another right-wing cross by Rose from the bye-line.

Rose continued to be thorn in Argyle’s right side and the Devonport end held its collective breath when he played in Hamilton. Maybe it was just the sight of Palmer, coming quickly from his goal, that put off the Stag, but he missed the target.

Which was closer than he got when former Pilgrim Alex MacDonald sent a testing low square ball across the six-yard box that sat up and begged to be finished.

Argyle’s obduracy proved to be a platform on which they could build, though, as they played their way into the match, spurred on by a believing Green Army, whose faith levels had never wavered.

Bakinson smacked a 20-yard volley against a post with goalkeeper Bobby Olejnik rooted, before Sarcevic fired a shot low across the goal and only just wide.

Further evidence that tide had turned and was green in colour came when Edwards’ cross found a good run by the predatory Jephcott, who twisted to send a header narrowly the wrong side of the target.

The Pilgrims continued to grind down Mansfield’s game resistance and gained due reward when Jephcott drew a foul from Hayden White on the Argyle left, in A1 position for Cooper’s left-foot.

Like an orchestra conductor wielding his baton, Cooper delivered the ball precisely on to the head of Canavan, who timed his run with equal exactness to get the jump on Neal Bishop and powerfully nod home the go-ahead goal.

Argyle, and, indeed, Cooper, started the second half as they had ended the first, with Byron Moore this time the beneficiary of Cooper’s promptings, a dinked ball over the top that Moore took in his stride for a shot that drifted agonisingly wide.

While Canavan’s goals have been a valuable pleasure this season, it is never forgotten that he earns his corn primarily at the mud and nettles end of the pitch, and his block to deny Maynard’s fierce drive was as wonderful as his earlier contribution 100 yards away.

Argyle’s admirable attrition was having a noticeable effect on the Stags, who carried a suitably hunted air that was summed up by Matt Preston’s obvious and needless push into Edwards’ back as he ran away from the danger area. Referee Trevor Kettle whistled for a penalty that Sarcevic thumped high and hard past Olejnik.

The Pilgrims’ march on the promotion places was given a wee jolt when Cook netted an outrageous long-range dipper with his first touch after coming on as a 66th-minute substitute, carrying on a personal vendetta that has seen him score three times in four appearances against Argyle.

Back came the Pilgrims, with no thought about parking the bus. Danny Mayor weaved his way into the penalty area and laid the ball off for Cooper, whose driven cross was nearly turned into his own net by Bishop.

Canavan then went close to doing a Jephcott and doubling up when a deft back-header of Cooper’s cross cleared the crossbar, which was also the fate of a powerful Sarcevic drive. Bakinson’s aim was lower, but his equally vicious effort clattered against the crossbar.

Hardie and Josh Grant, back at Home Park on a second loan spell, came on from the bench as Argyle maintained the pressure until the end, cementing a third successive win with Hardie’s sublime finish.