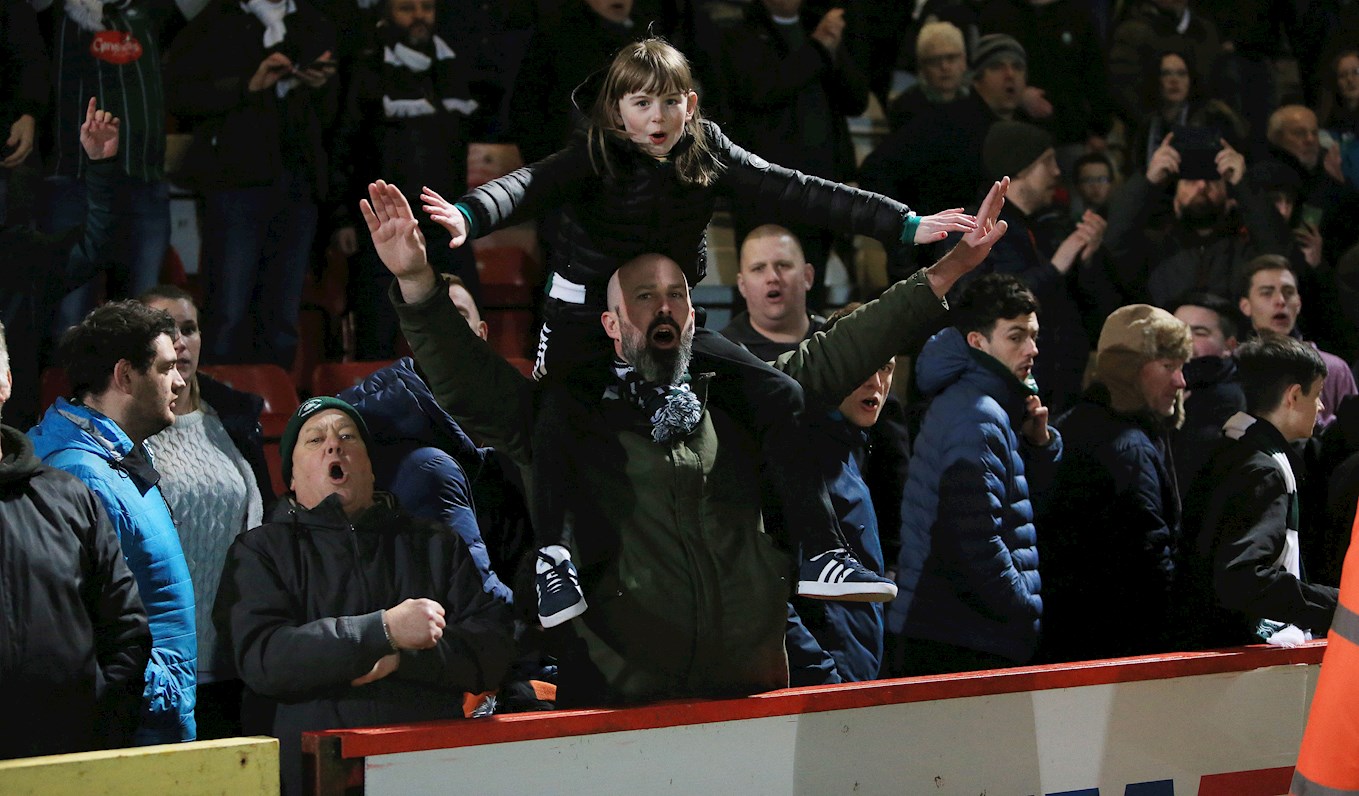 In a stop-start, often bitsy, game, elongated by nearly 20 minutes because of a first-half injury to Pilgrims captain Gary Sawyer and second-half floodlight failure, Argyle showed great fortitude and no little skill to come through what was always going to be a hard-fought encounter.

Argyle had to see off a late Stevenage revival, in which Charlie Carter scored, to claim maximum points that keeps their promotion-chasing momentum nicely on the boil.

Argyle’s starting line-up included midfielder Josh Grant as the single change to the team that had beaten Mansfield Town 3-1 at Home Park seven days earlier – indeed, one change from a settled line-up that had secured three successive and impressive wins.

Danny Mayor was the man to make way as Grant lined up for his first start since re-joining Argyle on loan from Chelsea, playing alongside Tyreeq Bakinson and Antoni Sarcevic in the heart of the Pilgrims’ side.

Teenage Academy graduate Luke Jephcott, who had scored four goals in those three triumphs, was retained in attack alongside Moore. On-loan Blackpool striker Hardie, who had scored in both his home and away Pilgrims' debuts, again started on the substitutes’ bench.

The game got off to a worrying start when Sawyer stayed down after what appeared to be a fairly innocuous challenge and remained in the foetal position, not moving a muscle, for several concerning minutes.

It seemed inconceivable, at one point, that he would carry on and Conor Grant was stripped for action. However, after some expert and unhurried TLC from Pilgrims’ physio Dave Galley, the Argyle skipper returned to action, gingerly at first, but soon back in the thick of things without showing any ill effects.

The early hiatus did Argyle no favours but, after Alex Palmer had positioned himself perfectly to beat out a drive from Jake Cassidy, they took up their cudgels. The Assist King of Home Park, Cooper, zipped over a dangerous cross before Sarcevic charged down a kick-out from Boro goalkeeper Paul Farman with the ball bouncing safe.

Stevenage’s struggles this season have tended to mask an interesting statistic – before Saturday, they had achieved more clean sheets, 11, than 22 of the division’s 24 teams, seven of the stalemates having come in their 12 games immediately before Saturday’s clash.

With six of those seven blanks being from 0-0 draws (Crawley, Forest Green, Colchester and Oldham at home; Scunthorpe and Walsall away), it is clear where priorities lie in North Herts, and the home side were quite happy to soak it up. After half an hour, Argyle had enjoyed 60% of possession of the ball.

However, with Cassidy limiting the availability of Canavan to effectively send out those heatseeking diagonals that have become one hallmark of Argyle’s season, and Stevenage pressing persistently, not much of that possession was clean.

Argyle, of course, are blessed with a relentlessness of their own and had no intention of ceding the cluttered middle ground to anyone, as Joe Edwards signalled with a pugnacious run that ended with a shot across the face of the Boro goal, which was near enough to Farman to cause concern.

That preceded a pleasing spell of Argyle pressure in time added on to the end of a first half lengthened almost exclusively because of the delay caused by the injury to Sawyer. When the whistle sounded to end the half, Stevenage will have been happier to hear it.

They were less happy not to hear a whistle two minutes after the break, when Moore broke their stranglehold on the game with a superb strike. Naturally.

The now happily fully restored Sawyer took the ball from Palmer on the left and sent it wider to Cooper, who spotted the run of Moore and curled a superb pass into his path, so deliciously weighted that he did not have to break stride before slotting the ball inside Farman’s near post.

Stevenage manager Graham Westley, 40 yards away, was convinced Moore’s hand had been involved in controlling Cooper’s sumptuous prompt but referee Sam Purkiss was unimpressed by the histrionics, and the home manager’s displeasure merely increased the Green Army’s considerable joy.

Floodgates open, an Argyle tide poured forward towards the goal behind which the Green Army were celebrating. Moore made strides down the left before driving a cross into the six-yard box that was destined to be swept home by Jephcott before Farman’s last-gasp intervention.

There was then another enforced break in proceedings while referee Purkiss felt obliged to enquire why the floodlights had ceased to flood any light, or even dribble any, and whether they might become operational any time soon. Ten minutes later, play restarted and the game-clock was reset.

Following another stoppage, for injury to a Stevenage player, Argyle got back to business, knocking the ball slickly and moving quickly. They had to be watchful at the back as Stevenage came out of their shell, though, and substitute Kris Guthrie set up Tom Soares for a shot saved by Palmer before the replacement fired the ball on to the crossbar.

Hardie came on and, inevitably, with Sarcevic growing into the match by the minute, it was not long before the super-sub Scot increased the Pilgrims’ advantage, latching on to Sarcveic’s headed pass over the top of the Boro backline. One touch to control the ball, another to slip it by Farman, and a third to convert.

With the Green Army serenading their heroes, Carter pulled one back for Stevenage, heading home a loopy old effort just before 13 minutes of added time began.

Disciplined defending and renowned ruthlessness saw the Pilgrims home,as we knew it would.