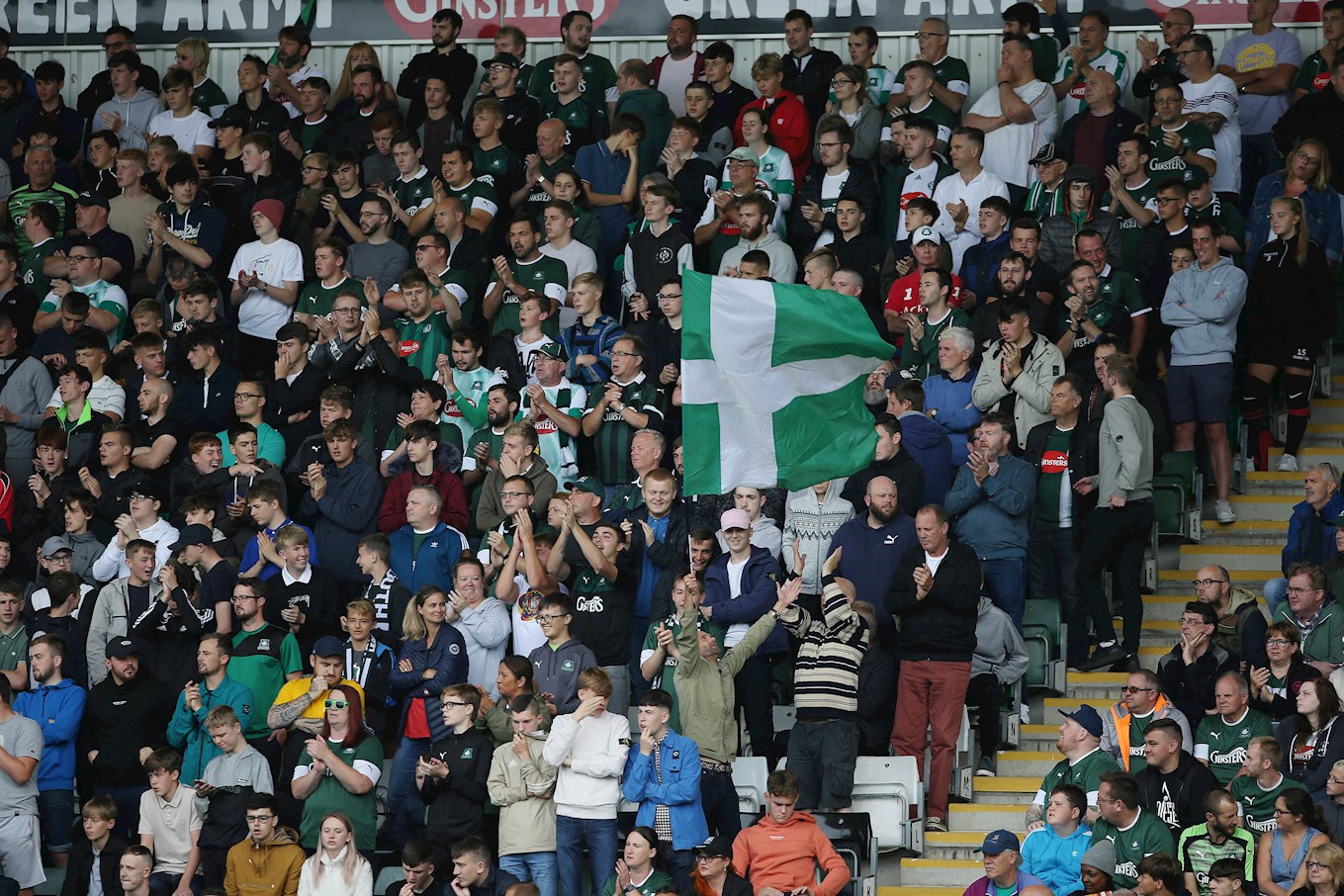 WEDNESDAY’S game against Swindon Town is our 12th home league Sky Bet League Two match of the 2019-20 season; we have won our previous five previous games at Home Park.

THE match will be celebrating the full official opening of the new £8m-plus Mayflower Grandstand, and the launch of Mayflower 400, marking the start of worldwide celebrations to mark the sailing of the Mayflower to ‘the New World.’

RECEPTION at Home Park is in the Ticket Office and will be open from 10am on match-day.

THE Home Park Superstore is also open from 10am. Between 12.30-1pm, Neil Warnock and Ronnie Mauge, heroes of the 1995-96 promotion-winning Pilgrims, will be in the Superstore for signings and selfies.

OUR Match-Day Mania special is half-price on the official 2020 Argyle calendar. Our winter sale also continues.

WE have two Fan Zones open before the match to allow supporters soak up the pre-match vibe; sample some pre-match entertainment; get a bite to eat and have a drink; and enjoy each other’s company: from 11.30am at the Devonport end and outside the new Mayflower Grandstand. Admission is free.

AWAY fans will be able to pay on the day (cash or card) on Gate 22 at the Barn Park end of Home Park; this will also be a late gate.

A SPECIAL edition of the Pilgrim match-day programme, commemorating the official full opening of the new Mayflower Grandstand, has been produced for the game. The 96-page publication includes a stunning pictorial timeline of the grandstand construction, from Day One of demolition to the completion of the magnificent £8m-plus Mayflower and retails at £5. There is also our new-for-2019-20 children’s programme, which costs just 50p.

BEFORE the game, we will be holding the latest instalment of our regular Crossbar Challenge, with someone selected from the crowd at this time at every home game to step on to the pitch and attempt to kick the ball onto the crossbar. An £800 prize awaits a successful challenger. In the event that the crossbar is not hit, the £800 rolls over to the prize fund for the next home game, making the pot £850. The prize fund will roll over by £50 week on week, until somebody is able to strike the crossbar. We only select from seats that are clearly occupied at 1.55pm – so to be in with a chance of playing the Crossbar Challenge, supporters need to be seated before then.

THE Match Sponsor is Devon Contract Waste. Established in 1989, Devon Contract Waste is a leading independent provider of cost-effective, environmentally sustainable commercial waste solutions, including data destruction. DCW provide a suite of confidential waste disposal services, which are all performed in compliance with GDPR legislation, to ensure that you do not fall foul of the law and end up paying potentially huge fines.

MATCH-BALL Sponsor is Just Acer. Based in the South West, Just Acer deliver superior refurbished Acer products at a reduced fee to a consumer/business-based market. Just Acer are also a genuine supplier of hardware and cosmetic components for all Acer products. Maybe your machine has a damaged screen, or maybe you are looking to increase the storage capacity by upgrading the HDD? Should this be the case, why not give their team a call for a no-obligation quotation.

MATCH-PROGRAMME Sponsor ITEC, Technology Partner to Plymouth Argyle since 2014, is one of the UK’s leading technology managed service providers. They are on a mission to drive companies to success through powerful technology strategies and partnerships and work with thousands of businesses, schools and organisations across the UK to push the boundaries of what is possible — consulting, building and supporting a technology ecosystem that galvanises business growth, employee happiness, and customer satisfaction.

THERE will be a 50-50 Lottery half-time prize draw, with tickets available from the usual sellers. Former Pilgrims Geoff Crudgington, Tommy Tynan and John Uzzell – more than 1,000 appearances and 152 goals between them – will make the draw.

PLYMOUTH Parkway Under-11 Colts are taking part in a small-sided game, organized by the Argyle Community, at half-time. This is part of a full package which includes match tickets, a stadium tour, lunch, shop discount, discounted Community Trust roadshow courses and a signed football from the first-team squad.

ALSO at half-time, we will be joined by Charles Hackett, Chief Executive Officer of Mayflower 400, which launches on January 1, and good number of Mayflower Makers volunteers who will be hosting groups and promoting our city over the course of 2020 to commemorate Mayflower 400.

PLYMOUTH Argyle is a community-focused, values-driven organisation, whose stated aim is to make attending football matches as inclusive and enjoyable as possible for all members of society. We have a zero-tolerance approach to anyone who thinks it is acceptable to bully, intimidate or discriminate against a fellow supporter, player or member of club staff. We encourage supporters to report any instance of inappropriate comments, chanting or behaviour – you can do this to the nearest steward, or to the club, or via our match-day reporting service: text ARGYLE and your message to 66777.

SUPPORTERS are reminded that they will be banned from attending any football match in this country for at least three years if they use, or even attempt to use, a pyrotechnic device at Home Park. It is not fun; it is not acceptable; it is not legal.

ACCESS to seating in many areas of the ground has become something of an increasing problem, especially for our disabled supporters, so it is essential to keep the walkways clear. Thank you for your understanding.

AT Argyle, we have a duty of care to everyone who visits Home Park and, in keeping with our Vision and Values, we take that duty very seriously. That is why we ask all supporters to respect our requests to refrain from persistent standing. Thank you.