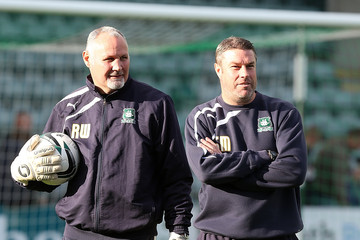 WE are joined by Argyle legend Sean McCarthy for tonight’s meeting with Crawley Town in Sky Bet League Two.

After learning his craft at Swansea City, the goalscoring striker moved to Home Park in 1988 and enjoyed two happy years as a Pilgrim before moving on to Bradford City and Oldham Athletic, starring for the Latics in the Premier League.

He returned for a second stint at Argyle in 1998 and spent three more years in the famous Green shirt before ending his playing days down the road at Exeter City.

Sean then moved into coaching with Truro City and Ipswich Town before joining the Argyle staff in 2013. He joined Newport in 2015 as first-team coach and fantastic to welcome Sean back to Home Park tonight.