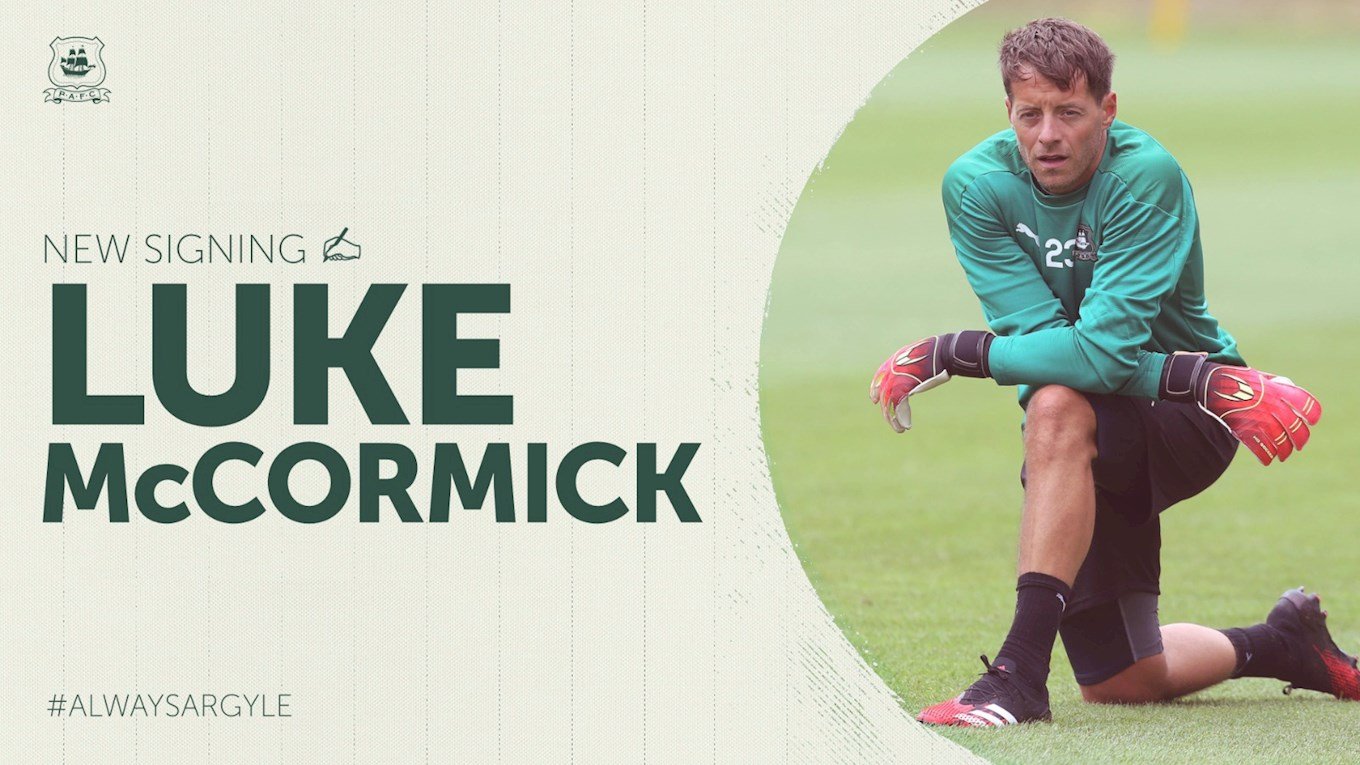 Goalkeeper Luke McCormick has joined Argyle for the third time.

The former Argyle club captain, who turns 37 in a couple of weeks, joins the Pilgrims upon expiry of his contract from fellow Sky Bet League Two promotion-winners Swindon Town, and becomes manager Ryan Lowe’s first signing of the summer.

Not likely to need any introduction to the Green Army, Coventry-born McCormick began his career in the Pilgrims’ Academy, before signing professional terms and performing an understudy role to fellow Argyle legend Romain Larrieu in the 2000/01 season.

Having been forced to wait patiently for regular football due to Larrieu’s exceptional form in our Division Three title-winning season in 01/02, Luke became the first-team regular during the Greens’ 03/04 Division Two promotion campaign, winning the Pilgrims’ Young Player of the Season award as they were promoted to the Championship.

McCormick returned to the club for a second spell from Oxford United in 2013, and quickly re-established himself as the no.1 at Home Park. In the 2014-15 season, Luke was named club captain, winning the Player of the Season award after an excellent campaign, in which the Pilgrims reached the League Two play-offs. One year later, McCormick and his teammates went one step further, before falling short in the final at Wembley.

After successive play-off disappointments, Luke finally led the Greens to promotion – his third at Argyle - the following season, as the Pilgrims finished runners-up in Sky Bet League Two - a campaign also memorable for an FA Cup run which saw the Pilgrims hold Liverpool to a goalless draw at Anfield in the third round.

In the return leg at a packed-out Home Park, McCormick saved a Divock Origi penalty late on as the Greens fell to a narrow 1-0 defeat against the five-time European champions.

Upon leaving Home Park in the summer of 2018, McCormick had amassed a total of 347 appearances in all competitions for the Pilgrims, placing him 18th on Argyle’s all-time appearance list.

Argyle manager Ryan Lowe said: “We are very pleased to have been able to bring Luke back to the club.

“He has got great experience, it’s obviously a club close to his heart, and he is a favourite of the Green Army.

“We feel Luke will provide good competition with Mike Cooper for the first-team position.”

Welcome back to Home Park, Luke.

Luke’s home shirt is sponsored by PLG Consultants, which also sponsors Mike Cooper’s away shirt. McCormick’s away shirt remains available for sponsorship, alongside a number of other Pilgrims for the upcoming 20/21 Sky Bet League One season.