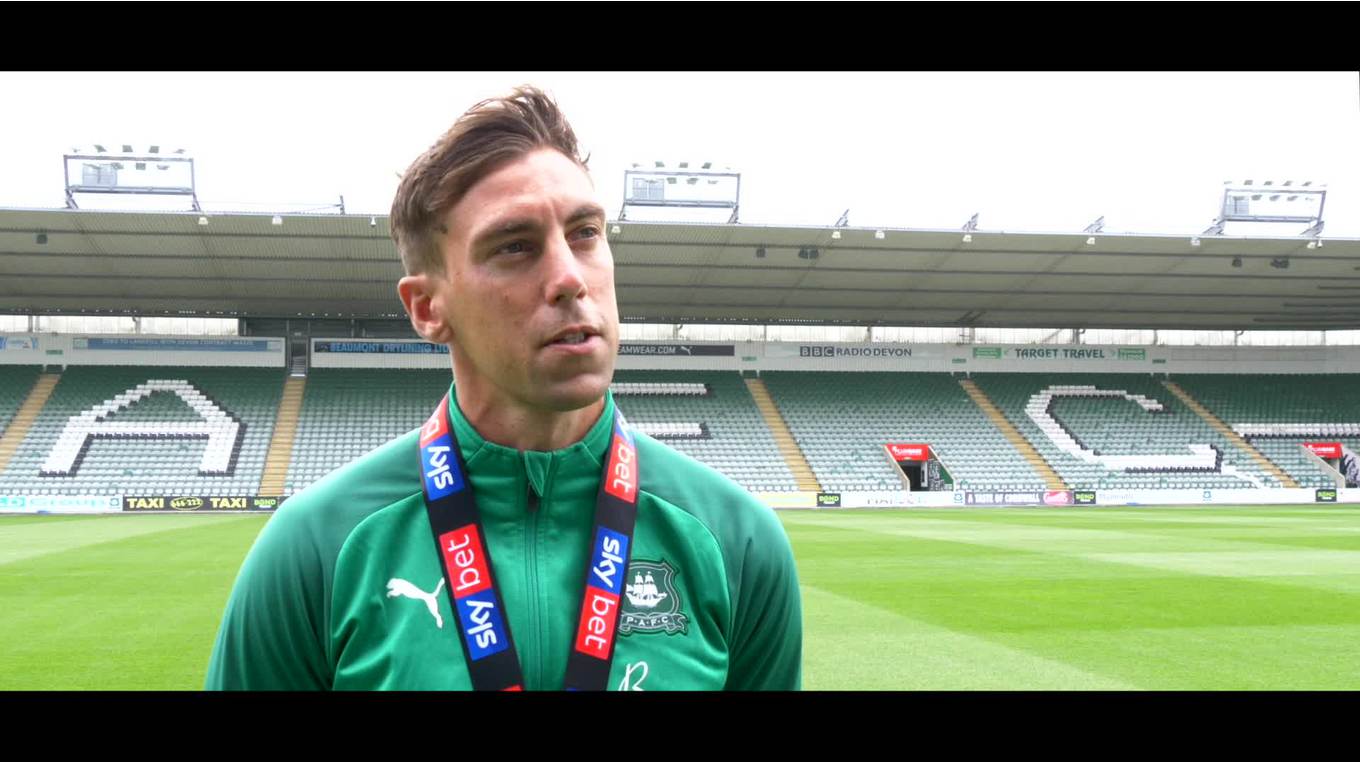 Argyle captain Gary Sawyer was at Home Park on Wednesday afternoon to receive his Sky Bet League Two promotion medal, capping a stellar season which saw the Pilgrims return to the third tier at the first time of asking.

Gaz, who turns 35 on Sunday, has spent the majority of his distinguished career at Argyle, having been a product of the Academy, and the promotion means the world to him, even if he is unable to celebrate it with the supporters.

He said: “That was our main aim this season, to get promoted. To finally get the medal around your neck is amazing, regardless of the circumstances. We’ve not been able to celebrate in a way you would normally celebrate a promotion.

“We will celebrate at a later date and the fans will hopefully be able to, but it’s a great achievement for the football club.”

Due to the current pandemic, the Pilgrims’ promotion was not secured by traditional means. Instead of celebrating in front of fans after clinching a defining result, the players and staff all received the news in the comfort of their own homes.

“I was with my mum when it happened,” the skipper said. “My family have shared in everything I’ve done, and it was nice to be involved with them like that. It’s not the way you’d choose to do it, you obviously want to play in front of a packed-out crowd and have all the buzz of everyone run on the pitch and celebrate.

“We can’t dwell on that; we’ve been promoted and that’s the main thing.”

Having begun his career in the youth ranks, Gaz worked his way up, leaving in 2010 to play for Bristol Rovers and Leyton Orient before returning to Argyle in 2015.

He has been a part of two promotion-winning sides in the past four years, with the first occurring in the 2016-17 season.

“I remember watching on in the youth team when the first team were getting promoted,” he said. “I used to watch and think that it would be amazing to be involved in something like that and obviously fast forward to now and, with the two promotions, it’s an amazing achievement for me.

“It’s what we play the game for and all the pressure and nerves of having that game was a great way and then you get to celebrate with all the fans when they run on the pitch.

“I’d like to have thought I’d seen everything in football, but this [way of the season ending] is a new one I can add to it. It’s different but it’s a promotion so we’re delighted with it.

“I started my career here; I consider this to be my home. I’ve not tried to hide the fact I want to stay at the football club. I know I’m getting that slightly bit older now, but this is the club I want to play for, and I will continue to do that while they will have me. The gaffer said he would sign me and said he believed in me. I want to play as many games as I can, and I will work as hard as whatever it takes to be involved.”

With the 2019-20 season prematurely curtailed, Sawyer falls narrowly short of a landmark achievement in his Argyle career – and current sits three games shy of 300 competitive games for the Pilgrims.

He said: “I had it in my head at the start of last season. I knew I had to play quite a few games for that, unfortunately I’m three games shy of it but it gives me something to aim for when I come back. It’s a big thing for me, to play 300 games for this football club.

“I’m still playing at the minute so it’s something I’m trying to add to. I think it will be something that I really appreciate after football. I’m proud of what I have done, to play that many games at this club now, but at the minute I haven’t got an end date or end number on it so I’ll play as many games that I get given the opportunity to and I will try to add to that number as best I can.”

As a home-grown player, club captain, and one of the Pilgrims’ all-time appearance leaders, Sawyer knows he can rely fully on the Green Army’s support – and was keen to share a message with the supporters who could not be present for the promotion celebrations.

“[I want] to thank them from everyone. Everyone in our dressing room, the staff, everyone. It’s a shame we couldn’t all celebrate this together, that’s what we wanted to do. We played this season to get promoted for the fans.

“We appreciate everything everyone has done for us and the support and we can’t wait to see them next year in League One.”