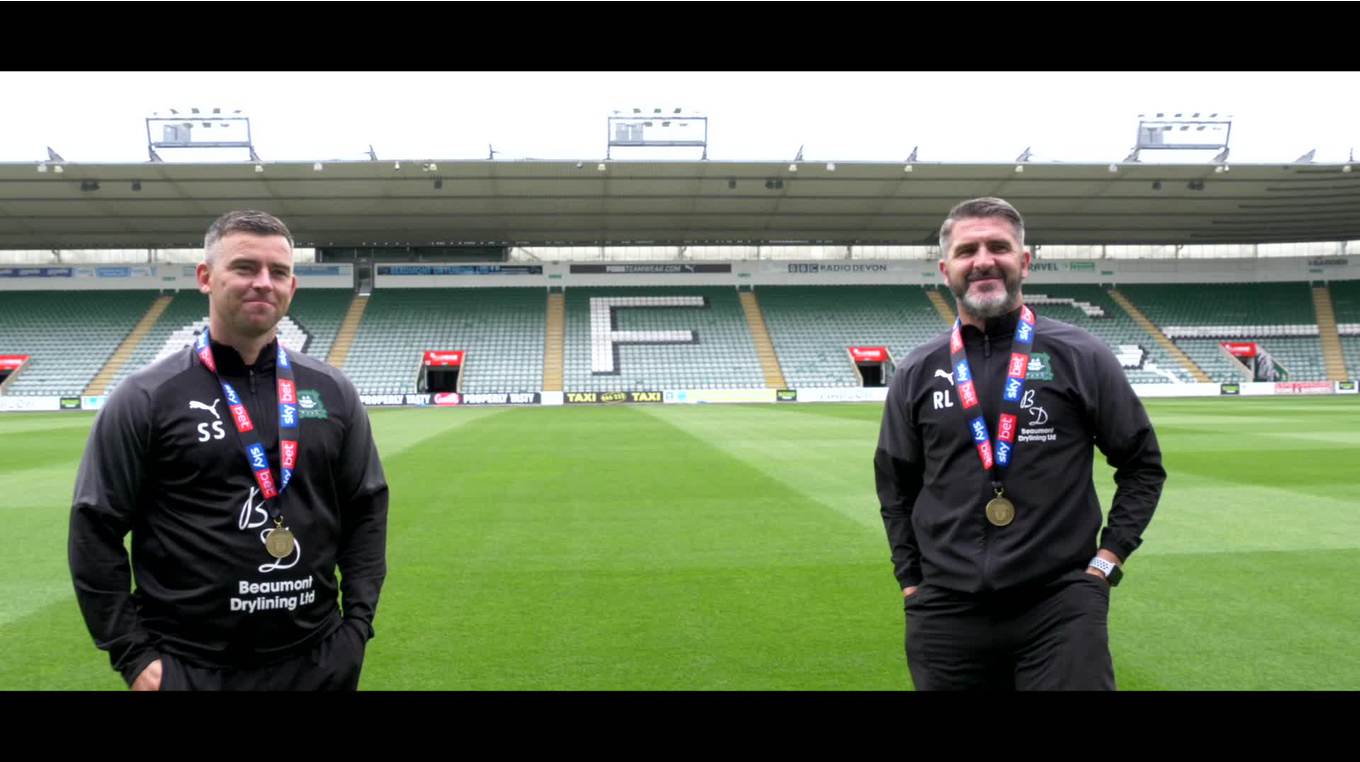 Having bagged their second successive promotion from Sky Bet League Two, the Argyle management duo of Ryan Lowe and assistant manager Steven Schumacher are both raring to go at a higher level.

“I’m glad it has all been confirmed and finalised,” Schuey said at a socially-distanced promotion ceremony at Home Park. “It has been a long wait. We set out at the start of the season with a goal, to try and get promoted. We managed to achieve that. We haven’t been able to celebrate with the fans, which is what we would have like to have done, but I’m sure at some point, when everything gets back to normal, we will.”

Having gained promotion in the 2018-19 season with Bury FC, manager Lowe moved south to take charge of the Greens, bring his trusted backroom staff and a handful of players with him.

He said: “First and foremost, the football we played was exceptional, and that goes without saying. I know that Crewe Alexandra and Swindon played good football as well, hence the top three went up.

“From me, Schuey and all the lads that have come down with us, what we have achieved is something special, to get this football club back into League One at the first attempt.

“We have had the staff behind us in terms of the board of directors, Simon [Hallett], Andrew [Parkinson], Zac [Newton] and Neil [Dewsnip]. We have to thank everyone associated with the football club for getting us where we got to.”

It is not in the make-up of Lowe or Schumacher to rest on their laurels, though, and they are already well into planning for the Pilgrims’ return to the third tier.

Lowe said: “We’re always working, non-stop. John [Lucas, Head of Strength and Conditioning] is setting the [training] programmes out, Jimmy [Dickinson] is analysing games, everything we’re trying to do, we are trying to do to get better.

“Although we got promoted, we don’t just stand still and say, ‘we’ve done it’ and go into the next league; we can’t go into League One half-hearted. You’ve got to get a good squad, which we’ve got, but we want to add more competition for places and that’s what we will certainly do.

“We speak to players [and agents] all the time and we will continue to do that but ultimately they’ve got to be the right fit. We’ve just got to make sure we recruit, keep analysing, keep seeing what players come available and if they’re good enough for us then we will try and do something with them.”

A big motivation for the staff and players this season has, without question, been the backing of the Green Army - and their loyal support does not go unnoticed.

“We can only thank them,” said Schuey. “The way they’ve welcomed us since we’ve come down to the club is unbelievable. I hope that they were proud of the team this season. That was our mission, to excite the Green Army and reinvigorate them and we felt that we did that, and the promotion tops it off.

“Next year, all we can promise them is that we will do the same, we will try to excite them and try to play the right way and give them a football team that they will be proud of.”