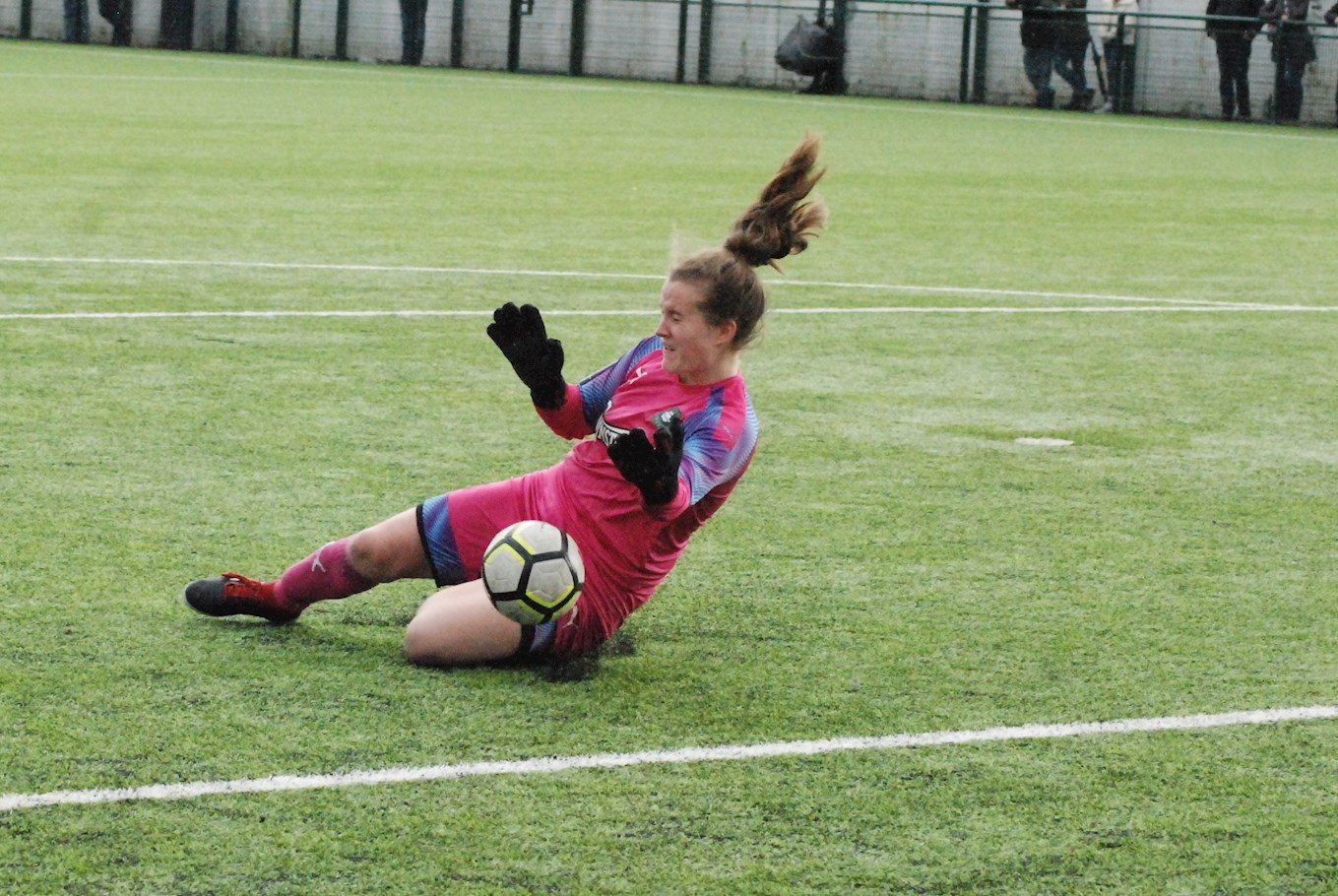 THIS was a battling performance by Argyle Ladies, who included five 16 year-old's in their squad against their lowly visitors.

With so many frontline players missing, Argyle manager Dave Leonard had to deal with another four – Panagiota Papaioannou, Faye Ivall, Natasha Knapman and Bow Jackson being unavailable. He then had the problem of goalkeeper Ben Kyle withdrawing through a chest infection while Steph Beck was still suffering from a hamstring injury.

This meant Leonard starting with Development team teenage goalkeeper Maisie Frickleton being handed the gloves. It also meant coach Vicky Fannon being given a run out.

Leonard started with a back four of Mollie Taylor, Kate Middleton, Lydia Huntley and Leah Burridge, with Helen Bleazard, Vicky Fannon and Ebony Dover in midfield. Lucy Solloway was leading the line and Nelinha Barros and Libby Lawton on the flanks. Beth Everson, Rosie Shipp and Steph Beck were the substitutes.

With such inexperience among the starting line-up, it was no surprise that Argyle took a little time in getting into their stride. The first real movement came when both Bleazard and Barros just failed to latch on to a Dover ball over the top of the defence, which was cut out by the Hounslow goalkeeper.

A free-kick for a foul on Lawton then came to nothing. Argyle were slowly getting their game together and another good Dover through ball found the onrushing Bleazard but her effort was saved.

Terrific link-up play between Dover and Bleazard saw her through ball to the onrushing Barros and Solloway being cut out by a last second interception. A long through ball from Middleton came to nothing before a terrific run by Solloway ended with Taylor's cross being cut out.

With Argyle now in control, a goal had to come and in the 32nd minute it did when a low corner from Bleazard to Dover saw her lay it off to Huntley who slammed it into the net for her first ever goal for the club. First-half time was running out when Bleazard found the onrushing Dover who scored with a clinical finish to make it 2-0 at half time.

Having been so much on top in the first half, Argyle were stunned when twenty seconds into the second half the defence were caught out by a long ball out to the left wing which Argyle failed to pick up the cross and Hounslow fired the ball past Frickelton.

This goal shocked Argyle into action but they were unable to take advantage through disciplined defending. Middleton then found Dover whose lob was headed on to the bar for a corner and a foul on Dover saw Bleazard’s free-kick headed on to the crossbar by Lawton.

The Pilgrims kept pushing and a great ball from Burridge to Barros ended with her shot going wide. With twenty minutes remaining, Argyle made a double substitution with Barros being replaced by Everson and Fannon, after an excellent shift in midfield, being replaced by Shipp.

Another superb Bleazard corner found the onrushing Middleton who was caught by surprise and she steered the ball narrowly wide. Argyle kept pushing but to no avail and safely came through what could have been a potential banana skin.

Manager Dave Leonard said: “It was the club that won, we had five 16 year-olds on show and that shows the progression the club has made. We wanted and got the three points because we are in the results business.”

Leonard explained his decision to promote 16 year-old Maisie Frickleton, who had only made two substitute appearances for the Development team to first-team goalkeeping duties, saying: “If we used Kate (Middleton) then we would have lost a leader in defence, so we decided to give Maisie her chance.”

Leonard also praised the contribution of coach Vicky Fannon: “She put in a good shift and it was good for her to see what she is trying to get the players to do in training on the field.”

A badly depleted Development team were beaten by a ruthless student outfit to progress to the semi-final stage.

This was always going to be a difficult task for the youngsters whose average age in the starting line-up was just 18 years. This was the biggest test of the youngsters season and they were defeated a powerful performance by the visitors from Bristol.

The young team shorn of a number of quality players drafted into the first-team were put on the back foot from the first whistle as Bristol raced into a two-goal lead within the first five minutes. The Development side replied within a couple of minutes when a Rachel Heron through ball found Nicola Champion who netted her nineteenth goal of the season.

The joy was short lived as Bristol soon had the youngsters under pressure again. Maddie Walsh in the Argyle goal had to be on her toes as she was called upon on several occasions to make some vital saves.

Unfortunately, the third goal was not far away, which was soon followed by the fourth. The Development team thought their task was going to be made easier when Champion was through on goal and the Bristol goalkeeper handled outside the area. The referee deemed it only a yellow card offence and an indirect free kick. Just before half-time, Bristol added a fifth.

Despite a half-time talk and a decent first five minutes, Bristol added a sixth goal. This seemed to be the goal that knocked the stuffing out of the young Argyle team and Bristol ran in a further six goals.

The scoreline could have been a lot worse if it wasn't for the Argyle keeper Maddie Walsh and some sterling work from defender Isla Brumhead.

Manager Rob Bonney repeated that the warning signs were there in the performance last week, unfortunately they were not heeded: “We take the good times as a team, so we take the bad times as a team. Nothing more needs to be said, we move on to next week.”