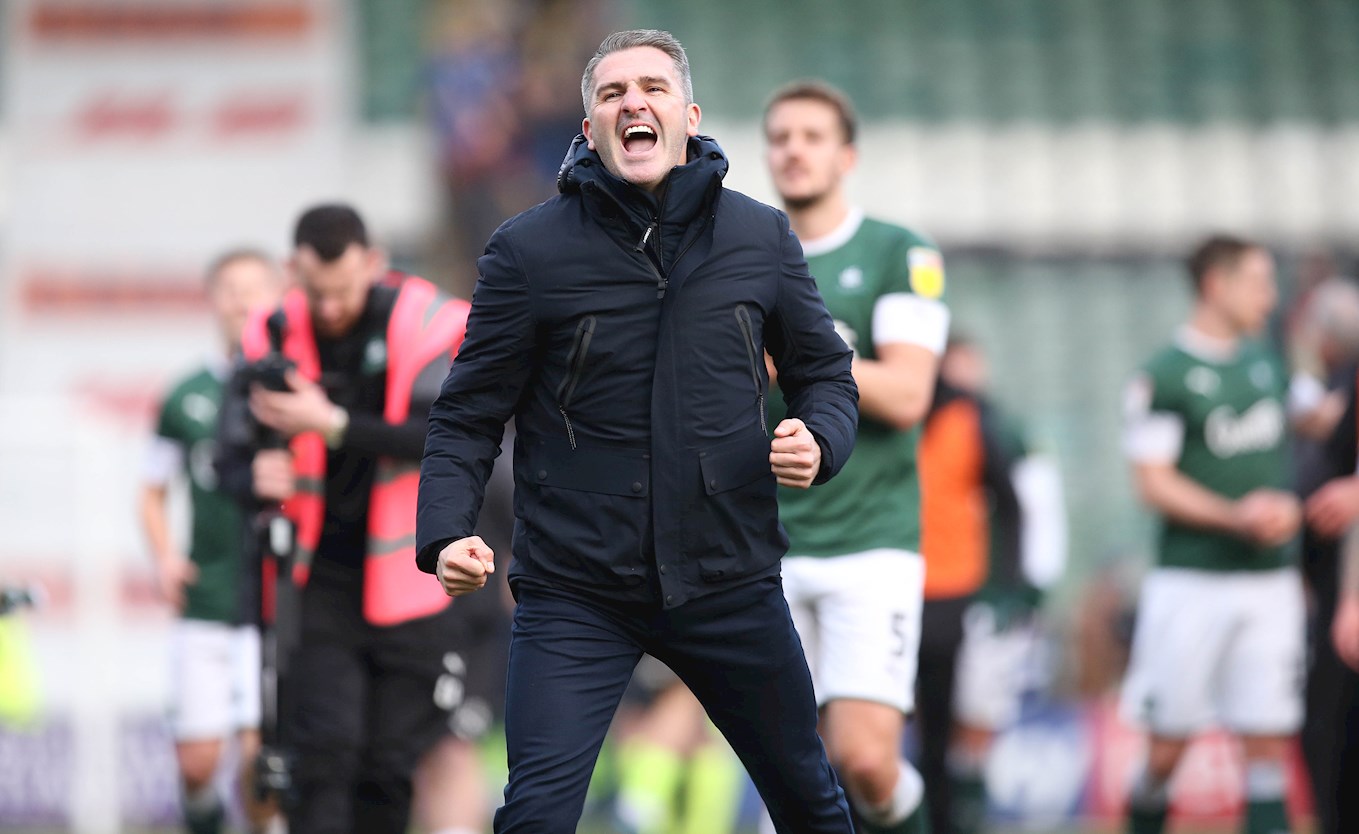 FOLLOWING Argyle’s fantastic 3-0 victory over Macclesfield Town in Sky Bet League Two, manager Ryan Lowe was keen to compliment his team’s performance overall and, although admitting he doesn’t particularly like to single anyone out, had praise for some individuals on their standout performances.

After providing an assist for the first goal and then getting on the scoresheet twice himself, Ryan was naturally delighted with man of the match George Cooper first after his wonderful display, as well as the scorer of the first goal, Ryan Hardie.

“It’s good for him [to get on the scoresheet],” said Ryan. “We know what George is capable of, we know he’s got that talent and we know he can score goals. That’s his third goal, but the assists he’s providing and his delivery is different class. I don’t like singling anyone out but fair play to him.

“It was possible that he [Ryan Hardie] should have had one more, it is what it is. For him as a striker, it’s disappointing but he’s always in the right place at the right time. A lot of credit goes to Ryan [Hardie] and George [Cooper].

At the other end of the pitch, Ryan ensured to commend his defence to keep Argyle’s lead intact at the time and ultimately keeping a clean sheet.

“Scotty Wootton’s clearance off the line was also important. That’s what they’re there to do but fair play to them, as they were there at the right moments in the game.

“He [Wootton] put his body on the line for his team, fair play to him. I don’t want to take anything away from him, but that’s his job - defending. The same with [goalkeeper] Alex [Palmer], same as the strikers – they get credit for scoring goals, Scott and the defence get credit for keeping the ball out the back of the net.

“The attitude and the application of them is different class. We can’t give him [Scott] an assist or anything, but he’s got his clean sheet. I’m sure he’ll be happy. Most importantly, he’s happy that we’ve kept the ball out the back of the net and got the three points.”

Ryan had also commented on debutant Jarvis Cleal, after the Academy prospect came off the bench for his debut appearance for the first-team.

“We’ve been monitoring Jarvis [Cleal] for a while and he trains with us most days,” said Ryan. “He will be with us day to day in the coming weeks, we have to let him play his games with the youth team as well. It’s been in the back of my head to bring him in, he got the call with a couple of suspensions.

“He deserves it, he’s a good kid and he’s worked his socks off. It’s a nice moment for him. I told him ‘you’ll be rewarded for the hard work you’re doing and when there’s an opportunity to get you on the pitch, you’re on’. We believe he’s got a fantastic future ahead of him.”

Ryan also had praise for the 2020 DJM takeover and the way they played their part in Argyle’s resounding victory over Macclesfield.

“Me and Schuey [assistant manager Steven Schumacher] thought that they were brilliant, with all their different colours. I don’t know how often we can do that, but if there are plenty of spare tickets available, then I think it would be good to make it a regular thing,” said Ryan.

“They were fantastic, so fair play to them because they were singing all the way through, cheering the boys on. There was a good atmosphere at Home Park again, which was great.”